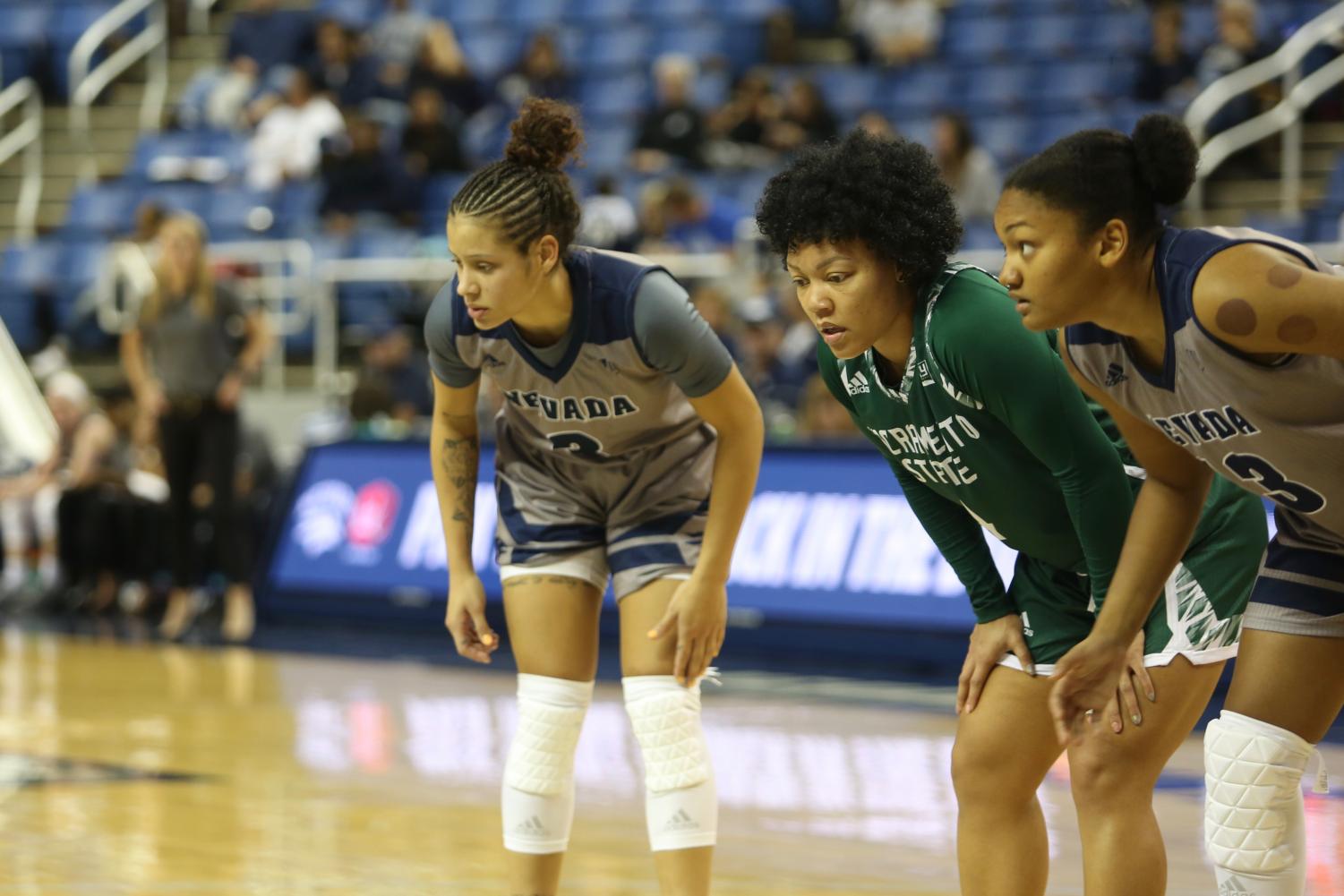 Sac State senior guard Camariah King lines up along the key between two former Nevada Wolf Pack teammates on Saturday, Nov. 9 in Reno, Nevada. King says Nevada’s decision to move on from her came as a shock. (Richard Ivanowski)

Sac State senior guard Camariah King lines up along the key between two former Nevada Wolf Pack teammates on Saturday, Nov. 9 in Reno, Nevada. King says Nevada’s decision to move on from her came as a shock.

The final buzzer sounded, and she knew there wouldn’t be a 50th game there in her future. Tears welled in her eyes.

King had an ice pack tied to her right knee. Another was wrapped around her left ankle. Sac State and Nevada players alike touched her shoulder or grabbed her hand as they passed her in the tunnel. Even a couple event center staff members stopped to say some kind words.

A native of Seattle, Washington, King played three seasons of college basketball for the Nevada Wolf Pack. She missed one season due to injury, which meant that she attended the school a full four years and graduated last spring, but retained one more year of athletic eligibility.

In the 2018-19 season, her third year playing for the Wolf Pack, King started nearly every game. She led the team in assists and was their third-highest scorer.

When the season was over, however, she was told by the University of Nevada athletic department and coaching staff that she should look elsewhere for her final year of eligibility.

“It was a choice through the administration to not have me back,” King said.

Head coach Amanda Levens of University of Nevada, Reno, confirmed that the decision to move on was made by the school.

“We’re taking over a program that hasn’t had a strong tradition of winning and we have certain standards both on and off the court,” Levens said. “It was a situation where we didn’t feel like it was a great fit with meeting those standards and what we wanted to do with building our program, so we just decided to part ways.”

King says she understands that tough decisions have to be made in the world of college sports, but accepting that decision didn’t necessarily make it any easier for her.

“I built a community and lived there for four years,” King said. “It was my second home. It was definitely a shock to me and a stressful situation to go through the whole transfer process and find a new home.

“My whole life in Reno was essentially altered and taken from me.”

Levens declined to clarify the reason for not retaining King. Sac State Athletics did not make King available for comment on Levens’ statement on King’s departure from Nevada.

King immediately looked to Sac State upon entering the transfer portal, and quickly made the decision to join the Hornets.

Sac State head coach Bunky Harkleroad had previously recruited King as a high school player, and she said she had strongly considered the Hornets program at the time. When Nevada informed her of their decision earlier this year, it made Sac State an obvious choice.

Before the season started, Harkleroad was effusive in his praise of King.

As fate would have it, Sac State was slated to open their season against Nevada. Camariah King would return to her old home and face off against her former team on her very first game in a Sac State jersey.

“She’s fired up about that,” Harkleroad said before the season began. “There hasn’t been a day (that has gone) by that we haven’t mentioned it.”

The narrative of a ‘revenge game’ is somewhat of a cliché in the sports world. But many clichés are based in truth, and there is no doubt that Camariah King had some extra motivation heading into the season opener.

“There’s emotion. There’s definitely a chip on my shoulder,” King said before the game against Nevada. “I feel like I have something to prove.”

When the starting players were introduced Saturday afternoon, King got a warm welcome from the crowd. The cheers she was met with rivaled those of the current Wolf Pack starters.

Unfortunately, once the game began, King did not get the results that she was hoping for — not by a longshot.

First and foremost, Sac State lost the game 83-72. Secondly, King had the worst shooting performance of her career. When the final buzzer sounded, she had missed all of her 14 shots from the field.

A despondent and exhausted King limped out of the locker room a few minutes later.

“My team came out and played hard and I didn’t show up to be there for them,” said a visibly emotional King. “My role is to be a leader and to lead this team. I don’t think I did that.”

“I’ve put everything on this game – everything on my shoulders,” she said when asked if she had put extra pressure on herself to perform against her former team. 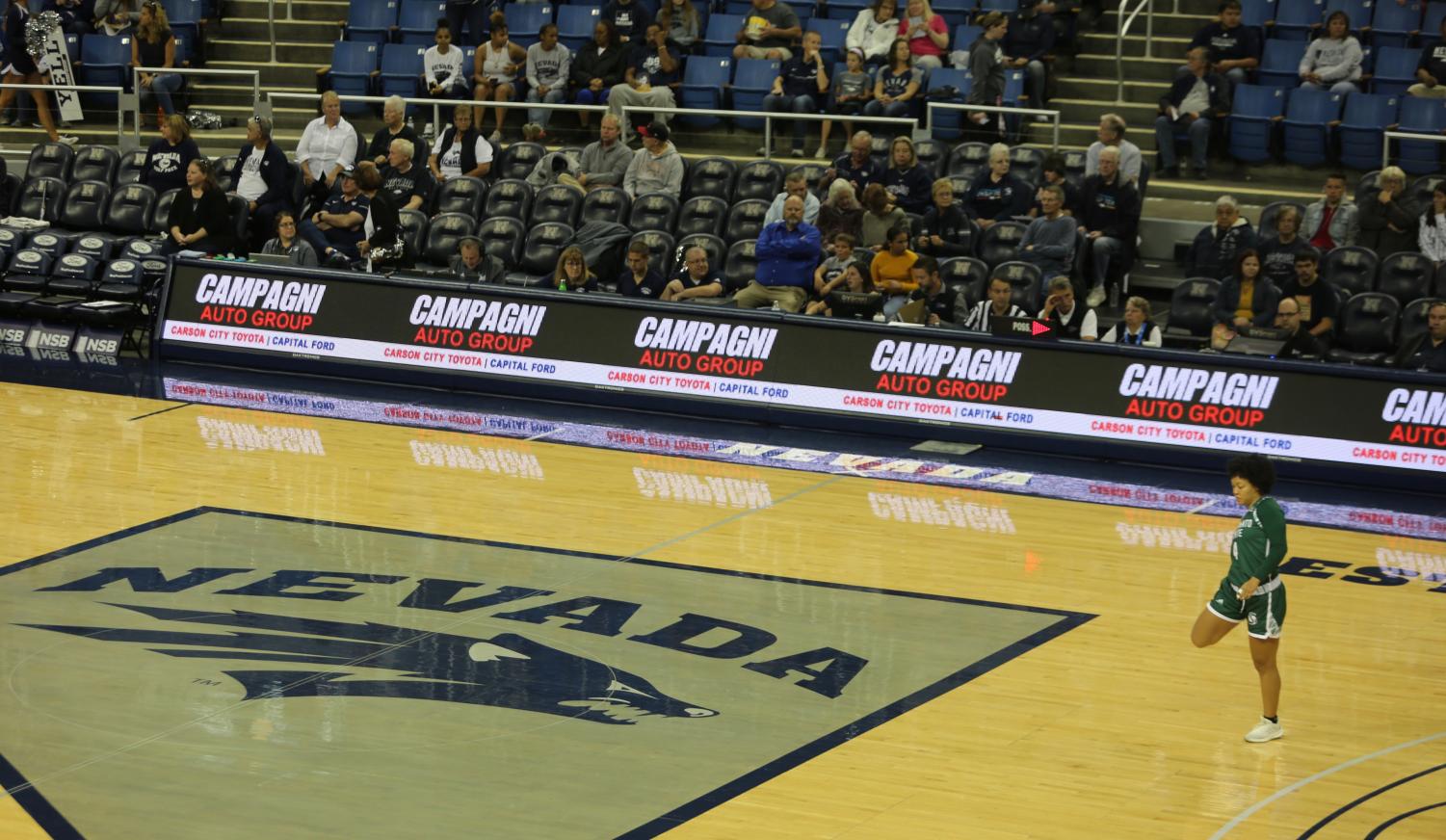