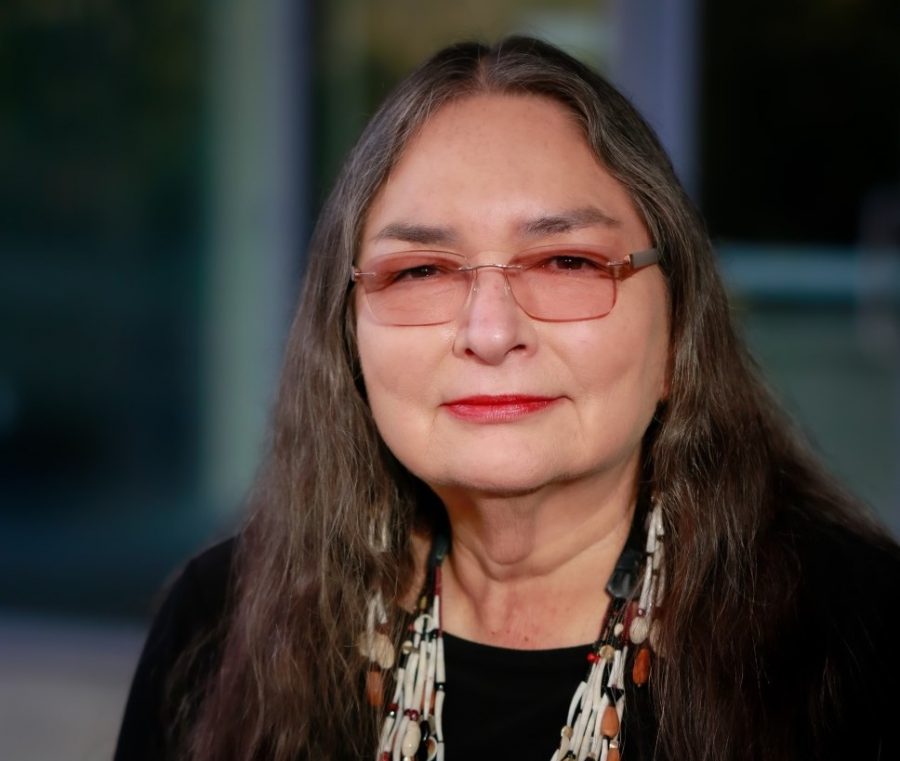 As she props herself up against a classroom wall at San Francisco City College, a 20-year-old Annette Reed is wrapped in a full body cast after surviving a motorcycle accident.

It’s here, in this classroom in 1978, she met her first love—Native American studies.

Reed said that Native studies is not just about being Native in the U.S., but about different tribal cultures, Native history and tribal sovereignty.

“Topics such as: Settler Colonialism and Native Sovereignty, we're not born with that type of knowledge,” Reed said. “There's so many things to learn and how different Native nations do things in a different way.”

Reed, who is a member of the Tolowa Dee-ni' Nation, a tribe in Del Norte County, California, sits as chair of ethnic studies at Sac State. As a Native American woman, she has never had it easy. Through the accounts of her students throughout the years, Reed can be described as a confidant for Native students, a community leader and a pillar of strength.

At 19, Reed was a helicopter crew chief with the last group of Women’s Army Corps and the first co-ed company in the U.S. army. Her life changed after a motorcycle accident left her in a full body cast. She was later medically discharged from the army.

“She used language that nobody in my life had ever used before…language that puts you into action. She would always speak things into existence for me. She was planting little seeds in my life.”

Uncertain what to do, she turned to her family in Smith River in Del Norte County. Reed decided to be the first in her immediate family to attend college.

Counselors discouraged her from pursuing teaching, and said the pay was not good and there was no respect for teachers.

Reed was unsure what she wanted to do, but with the guidance of her Native American studies professor, Valerie Mathis, she transferred from San Francisco City College to University of California, Berkeley, where she obtained her high school teaching credentials.

Aside from teaching Native studies, Reed also worked in child assault prevention, with the American Indian Child Resource Center in Oakland and as a Native American resource teacher in Fremont.

“I got really excited about the research and learning more,” she said. “I ended up with the realization that I wasn't finished with my education.”

Reed would later pursue a master’s degree and researched several history master’s programs. One of the schools she found she knew she was qualified for. She recalled the time she spoke to one department chair at a university she left unnamed. 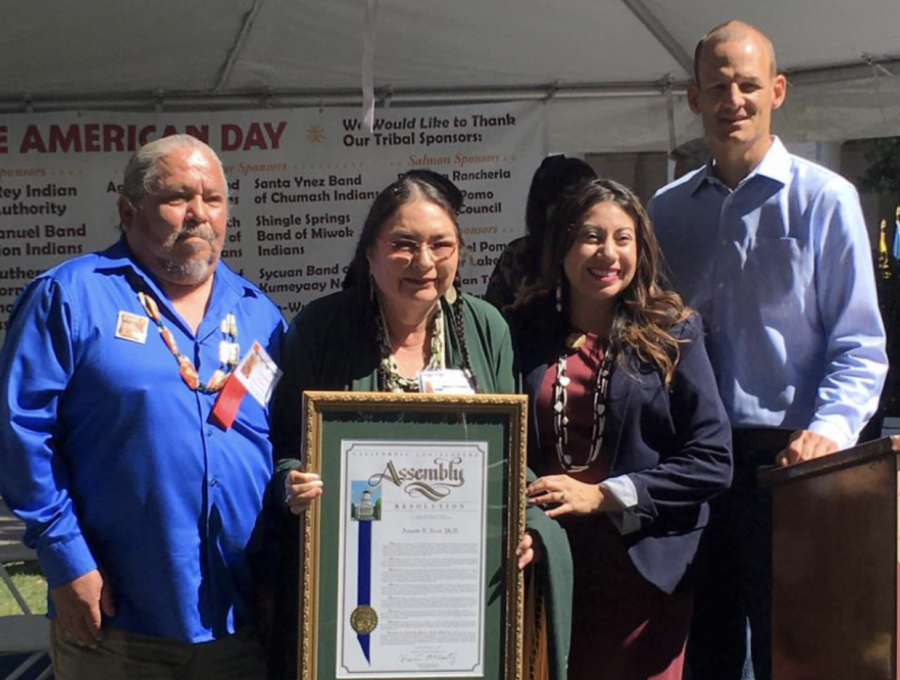 (From left to right) Marvin Richards, a member of the Tolowa Dee-ni' Tribal Council, Annette Reed, Reed’s former student Crystal Martinez-Alire and Assembly member Kevin McCarty in 2016. Reed was awarded for her service in education and dedication towards Native American studies. Photo courtesy of Annette Reed.

The chair did not look at her transcripts. Instead, he asked about her race. When Reed told him she was Tolowa, he said:

“We’ve never had an Indian in a master’s program. You know, people of color don't make good teachers.”

“I felt hurt, anger,” she said. “It was completely discrimination.”

She kept looking for another master’s program. A year later, she pursued her masters at the University of California, Davis.

She returned to UC Berkeley and became the second or third California Native woman to earn a Ph.D. in any area of study, according to Reed.

As she was completing her Ph.D., a position at Sac State opened up. The university was looking for someone specializing in Native American studies with a focus on California Natives.

Currently serving as the ethnic studies chair at Sac State, Reed said she misses being in the classroom with students.

As she recounts her experience working with Native students, she becomes emotional.

“Working with students is my greatest joy,” she said as she held back tears. “I’m so proud of them.”

Vanessa Esquivido, No Rel Muk Wintu, Hupa, and Xicana, is one of Reed’s mentees. She is a former McNair scholar and now teaches Native American studies at Chico State.

Esquivido established a mentorship with Reed in 2008, when she was an ethnic studies major at Sac State. She said having an instructor who looked like her, inspired her to do well in school, especially as a first generation college student, which she said is a harsh experience.

“I went to a junior college for a long time, and then moving up into Sac State was really intimidating and scary,” she said.

But amongst the intimidation, Esquivido saw Reed, a familiar face from her community.

“She's really known in our community as someone to go to,” she said. “Really taking her class, like really getting to know her, made me feel like I could do this, that I belong here.”

Story continues below the images. 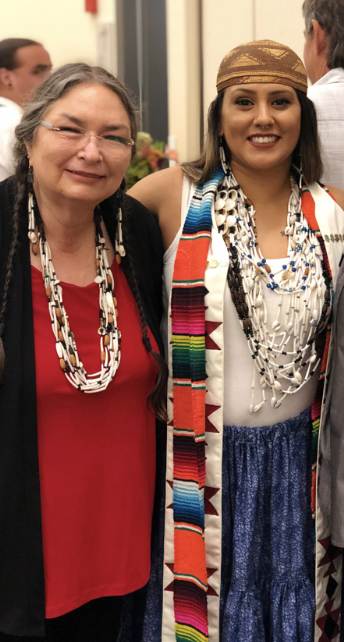 Annette Reed with Vanessa Esquivido, an alumna of Sac State, at her Ph.D. graduation at UC Davis in 2019. Esquivido is now on a tenured track Native American studies professor at California State University, Chico. Photo courtesy of Annette Reed. 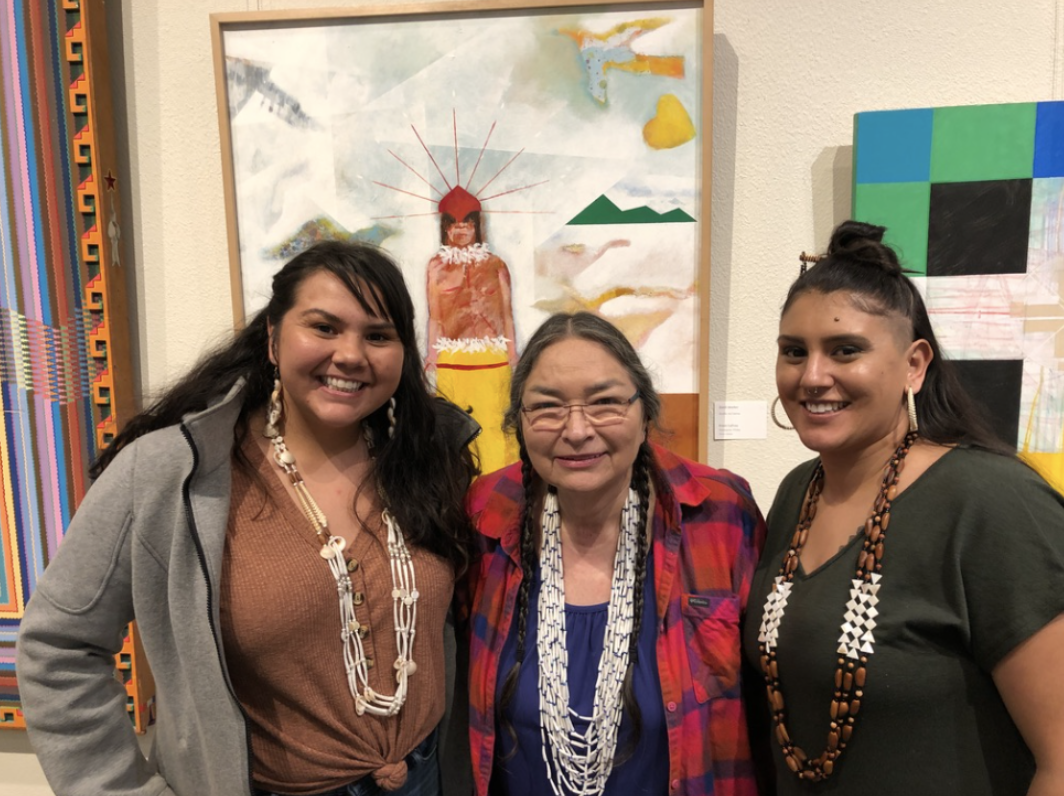 (From left to right) Sac State graduate Deserea Langley, Annette Reed and Vanessa Esquivido pose for a picture at the Crocker Art Gallery in Sacramento in 2019. Langley and Esquivido are amongst the many Native students Reed has mentored. Photo courtesy of Annette Reed.

Even after Esquivido graduated from Sac State, the two kept in touch. Esquivido says Reed even sat at her dissertation committee.

One memory that comes to mind for Esquivido about Reed was one of the nights before her qualifying exams for her Ph.D. back in 2013.

Esquivido was nervous for her big exam. In support of her, Reed began smudging for her, cleansing the air and her body with root. Afterwards, Reed gave Esquivido the lighter she lit the root with, reassuring her that she would qualify.

To this day, Esquivido still has that lighter.

“It reminds me of her,” she said. “It reminds me that there’s always people in my corner. People besides my family wanting me to succeed.”

Esquivido recalled her days at Sac State in 2010 where she took Reed’s Native American women class. The class had six or seven students, all Native, Esquivido said. Unfortunately, due to minimal enrollment, Sac State cancelled the class.

However, that did not stop Reed. Instead, she taught the class for free, determined to have her students learn the matter.

Nia Gregory, Cherokee and Yuchi, is a graduate student at Sac State. She says having Reed become her mentor was one of the best decisions she made in her life.

“She used language that nobody in my life had ever used before…language that puts you into action,” she said. “She would always speak things into existence for me. She was planting little seeds in my life.”

Gregory met Reed during her undergrad at Sac State in 2016. Originally, Gregory was not an ethnic studies major, however, after taking Reed’s Native American women course, she decided to leave microbiology where she said she felt unseen as a Native student.

“[Reed] made me feel comfortable in my identity,” she said. “She lit a fire on me and allowed me to express myself more fully, and allow me to understand that I am this truly intersectional person.”

In fall 2016, when Gregory was in microbiology, there were only two Native professors out of 193 faculty members in the College of Natural Sciences and Math, according to Sac State’s faculty and staff profiles page.

In fall 2020, only one Native American lecturer worked in the entire department.

According to the California Faculty Association Equity Report, Sac State has one of the highest numbers of Native faculty of the 23 CSU schools, the highest being SFSU with 19 instructors.

In total, Native faculty make up 0.7% of all instructors across the CSU, with an average of eight professors per each university.

“The fact that we don't have very many Native faculty on any of these campuses, let alone California Native, needs to be emphasized,” Esquivido said.

Reed is hopeful that the number of Native instructors will increase with Assembly Bill 1460, which makes ethnic studies a graduation requirement for CSUs.

Despite how low the numbers are, Natives are still here, said Dr. Rose Soza War Soldier, a professor of Native studies at Sac State. Rose is also Mountain Maidu, Cahuilla, and Luiseno.

With the implementation of AB 1460, Reed said how Native American history is taught will change in higher education and K-12. For example, according to Reed, instead of making craft projects of California missions, curriculums should recognize the genocide of California Natives.

“A lot of people over the years have said, ‘oh, I don't want to talk about the genocide of California because that's a long time ago,’” Reed said. “But it reflects on today, it's still in our history.”

As Native people were forcibly removed from their homelands, Reed describes how non-Natives have difficulty comprehending the identity of California Natives.

For example, Sac State sits on Miwok, Maidu, and Nisenan land according to Reed. While Reed’s tribe is indigenous to California, Sacramento is not the homeland of her ancestors. She said her home is in Smith River.

“I think it's good that we're starting to do land acknowledgments of California Native people,” she said. “But then, how do we translate that into even doing more? When we're looking at getting our Native students, not only into universities, but supporting and helping them afterwards.”

A role model for Native students

Reed herself has supported her students after they move on from their respective universities.

Similar to Esquivido and Gregory, Rose was once a mentee of Reed’s. They met at the California Indian Conference a decade ago, an event Reed helps host. Since then, she says, Reed has always supported Rose, helping her through her undergrad at UC Davis. Like Esquivido, Reed also sat at Rose’s dissertation committee.

Rose described Reed as truly a Tolowa woman, someone who is authentic, caring and an overall symbol of strength. 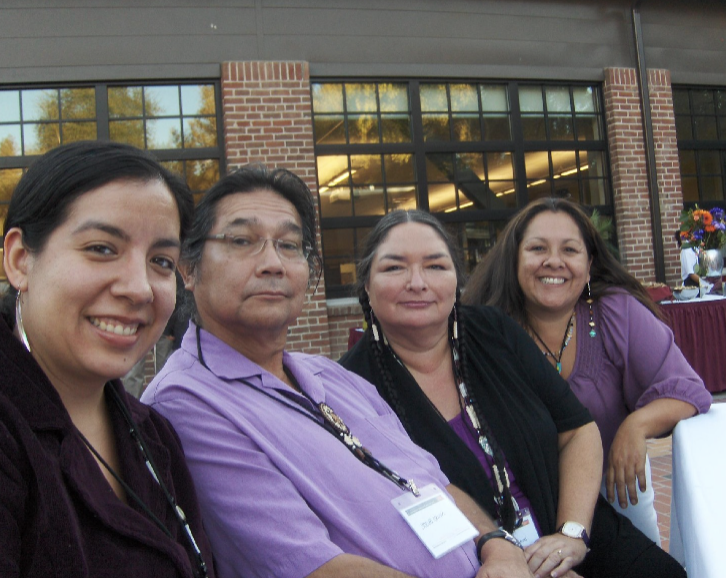 (From left to right) Rose Soza War Soldier, Steve Crum, Annette Reed and Lori Lawa Thomas at the American Indian Studies Conference located at Arizona State in 2011. Like many Native students, Reed has become a mentor to Rose. Photo courtesy of Annette Reed.

“[Reed] is a powerful role model, particularly for younger Native women who are coming up through the academy,” she said.

Gregory agrees, she said seeing Reed succeed inspires her to do the same.

“Seeing her make her moves made me realize what I could do,” she said. “That is the true definition of representation. Seeing is believing.”

Despite the praise, Reed said it is her job to be there for her students.

“It's so hard as Native people to go through,” Reed said. “So we need to provide whatever support we can.” 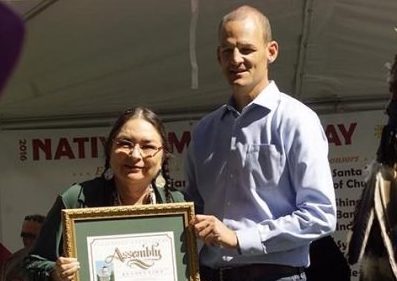 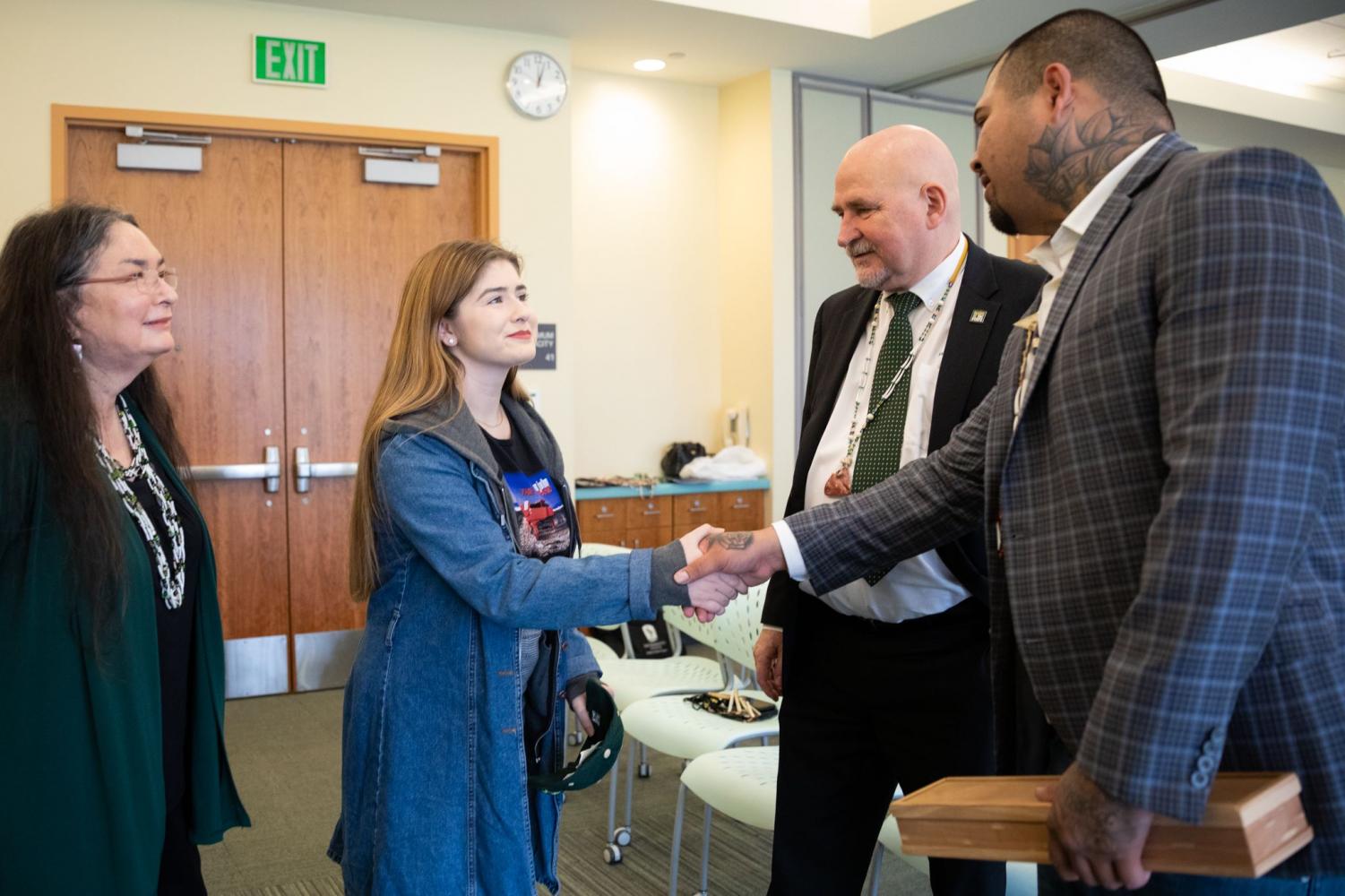 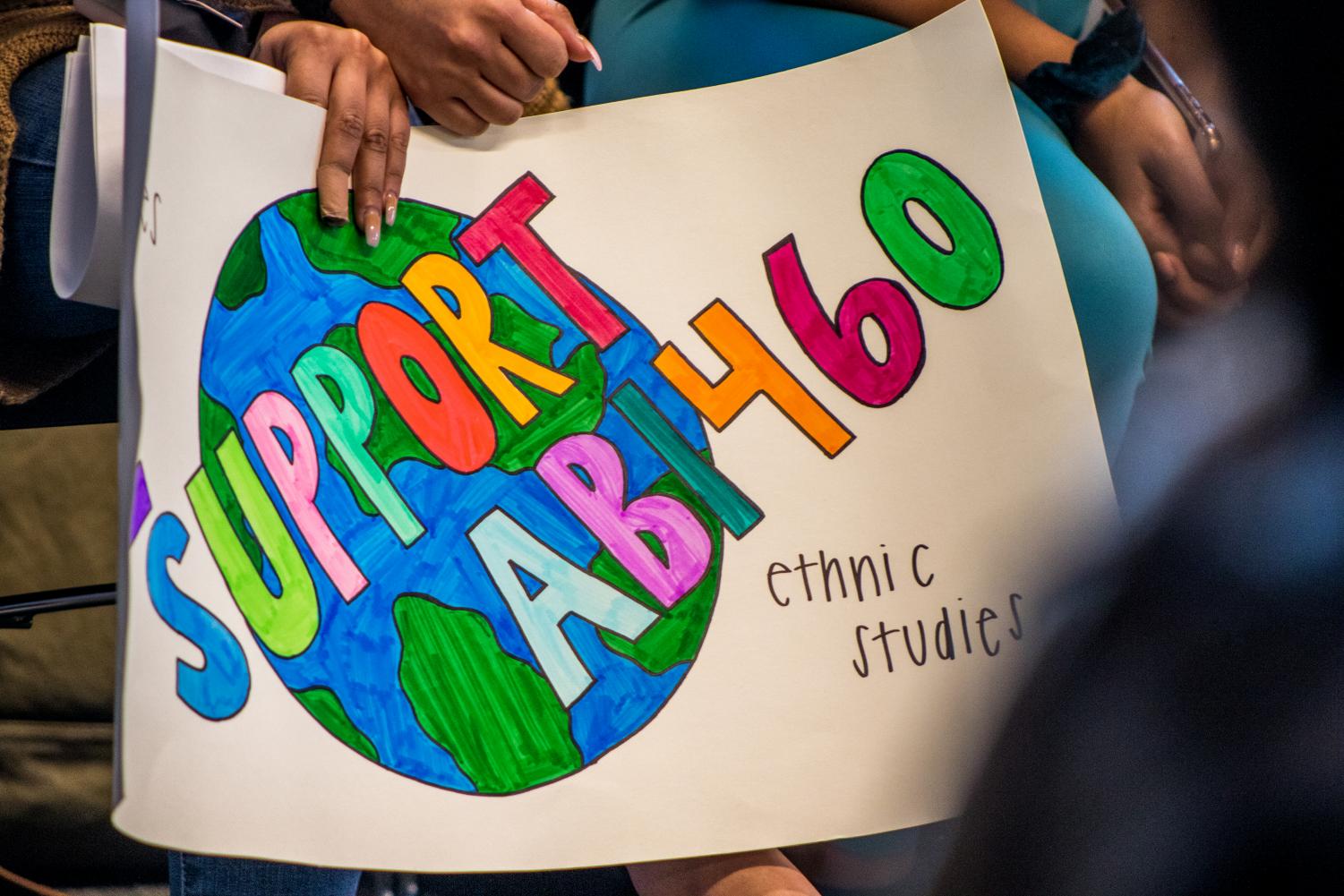 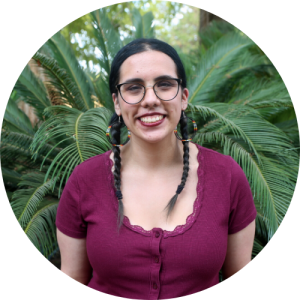 Emma Hall, diversity, equity and inclusion editor
Emma Hall is The State Hornet’s Diversity, Equity and Inclusion editor. Hall’s work has been featured with KQED, The Pleasanton Weekly, High Country News, The Advocate at Contra Costa College and The Inquirer at Diablo Valley College. Alongside The State Hornet, she works for the CalMatters College Journalism Network covering community colleges.