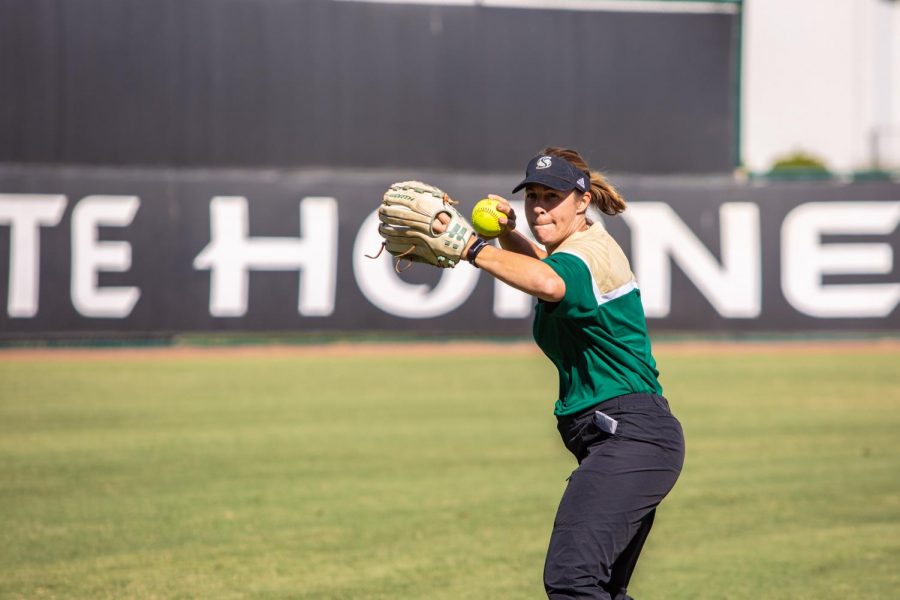 Sac State softball head coach Lori Perez throws the ball during practice Wednesday, Oct. 9 at Shea Stadium. Athletic Director Mark Orr announced Oct. 2 that Perez and Sac State agreed to a five-year contract extension that will keep Perez at the university through at least the 2024 season.

About 20 years ago, you could have found current head softball coach Lori Perez in her first year at Sacramento State as a softball player, fielding grounders at Shea Stadium.

Today, you can still find Perez there, now the one hitting the practice grounders to her players. Perez concluded her sixth season as head coach and fifteenth year on the Hornets’ coaching staff last semester.

Athletic Director Mark Orr announced Oct. 2 that Perez and Sac State agreed to a five-year contract extension that will keep Perez at the university through at least the 2024 season.

Perez has always been surrounded by softball. The youngest of three, Perez grew up in a household of boys and has been on the field since before she can remember.

“I grew up on the ballfield,” Perez said. “I don’t remember a day without a season. I started playing young with my brothers on the streets, as young as I can remember.”

At 8 years old, Perez was playing in the youth leagues in her hometown of Petaluma, California. By the time she was 10, Perez said she was asked by the league to find a more suitable program for her skill set, and that the next town over told her the same thing.

Eventually, Perez found her way to a team in San Jose where she was able to face a higher level of competition. From ages 11 to 18, Perez was traveling two hours to San Jose twice a week to be able to compete on a travel ball team.

“By the time I got my license, my mom shooed me off and I remember at that time that’s when cell phones first came out,” Perez said. “You used to have free nights and weekends on cell phones. I remember being a kid at 16, on the way back from practice, it would be free nights and weekend time, so I would call my friends while I was driving. I always have vivid memories of that.”

Perez competed in national tournaments and placed as high as third in the nation while on her travel ball team. From there, Perez was recruited by Kathy Strahan, the former head coach of the Sac State softball team.

“I’ll never forget it,” Perez said. “I had been in a bit of a slump and then I had a breakout game. I think I hit a triple and stole home and had some nice defensive plays.”

Perez went on to accept a four-year athletic scholarship to Sac State, beginning her collegiate career in the fall of 1998. While on the team, Perez played all around the infield, seeing games at third base, shortstop and second base.

During her four years, the two-time captain appeared in 196 games and earned all-Big West Conference honors. Perez remains the program leader for career fielding assists (495) under the name ‘Lori Meixner,’ something she said she takes great pride in.

However, it was not all success for Perez while she played at Sac State, as the team failed to produce a positive conference record during her time as a student athlete.

“We struggled, when I was here, pretty hard,” Perez said. “For me, it has always been a driving force to show up everyday to essentially, in my mind, fix that experience that I had and return the program back to where I think it should be and continue to be, which is competing for conference championships and being a part of that national scene.”

A few years after graduating, Perez returned to Sac State in 2005 to become the assistant coach and oversee the pitchers and infielders. Perez had pitched in the early stages of her career as a player, providing her with experience to share as a coach.

In 2014, Perez was named the interim head coach when Strahan announced her retirement. Perez became the official head coach later that same year.

Perez’s time as a coach has rewarded her with the victories she did not see as a player.

In 2012, the Hornets’ defense, something Perez said is a major focus for her coaching, posted a program record in fielding percentage (.979). In 2015, Perez led the Hornets to the championship of the Big Sky Conference tournament. Three short years later in 2018, Sac State won the conference championship.

During Perez’s six seasons as head coach, the Hornets have combined for a 164-142-1 overall record. Many players are enthusiastic about her returning for another five seasons.

“Softball is one of those sports that’s blowing up right now; there’s a lot of moving, a lot of shaking within the community,” Spieth said. “I think that this can give a coach who has really established herself in this organization at Sac State more room to grow and give incoming players a stable home they can rely on.”

Being the head coach of a game so centered around failure means that Perez often has to be one of the driving forces behind her athletes’ mental game.

“She’s kinda that support system when you are failing and nothing is going right,” said junior middle infielder Katie Vretzos. “She’s going to be the person that believes in you and makes sure you know that you can do this and you can succeed.”

Perez said she has also made academic success a point of emphasis for her team. The Hornets currently have a combined team GPA of 3.15.

The Hornets have achieved this academic goal in five of six seasons while Perez has been head coach.

Off the field, Perez is still working and managing budgets, taking recruiting phone calls and creating practice plans for the next day that she sends to her players every night.

“This is her life, this is everything she does, how she supports herself,” said senior pitcher Jensen Main. “The love for the game is huge. She makes sure we’re getting the treatment we need and she’s making sure we are doing the small things. The little details are what counts.”

Perez has seen her players grow as athletes and as people during her time as a coach, something she pinpoints as one of the most rewarding parts of coaching. As a mom of two, Perez said she often feels like she has 24 extra kids – and that all of her nightly coaching routine has to be finished with enough time to read to her children before bed.

“Sometimes people ask me, ‘how are your kids doing?’” Perez said. “Sometimes I’m not sure if they’re asking about my actual kids or my player kids. I do have my (own) two, but even at night I’ll get phone calls and texts with the girls just coordinating if someone had an injury or if something is going on. That part never ends.”