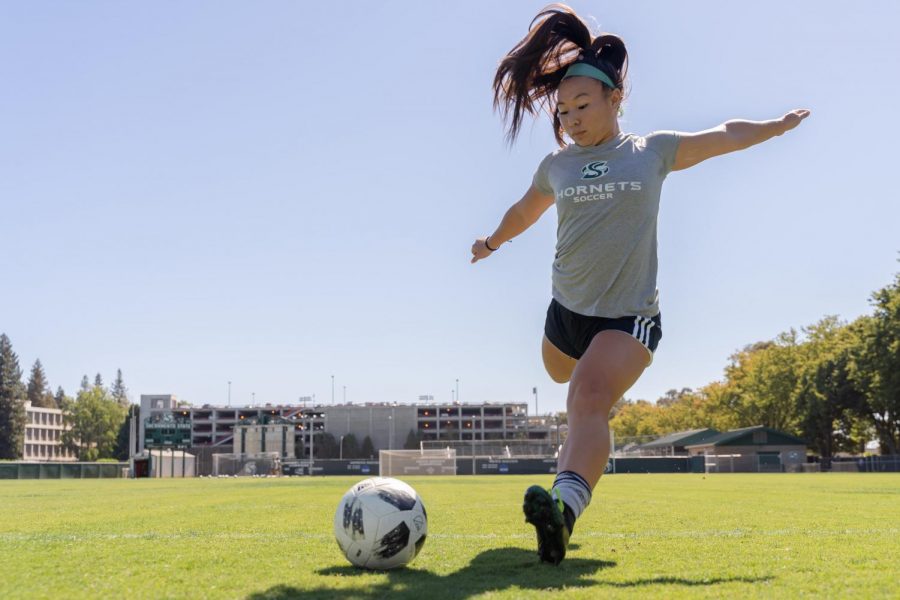 When you think of the number five in soccer, you might think of a defensive or holding midfielder, but Sacramento State women’s soccer junior forward, Kylee Kim-Bustillos, is neither.

Kim-Bustillos, a kinesiology major, is the opposite of what a traditional number five in soccer entails. Instead of being strong, tall and defensive-minded, she is a dribbler, creative and agile but most importantly, a goal-maker.

Originally from Mililani, Hawaii, Kim-Bustillos has kept the number five since her first club team and through high school, all the way to Sac State.

Kim-Bustillos has played soccer since she was four. Now 20, she said she tried new sports like volleyball at various points but stuck with soccer because it was the only sport in which her 5-foot-2-inch height was not a disadvantage.

RELATED: Sophomore brings experience, excitement and expectations to the pitch

The 2019 Sac State women’s soccer team has four players from Hawaii, due to the scouting by head coach Randy Dedini.

Dedini first saw Kim-Bustillos at a scouting camp at ‘Iolani School in Honolulu. He sent Kim-Bustillos an offer to attend Sac State after he saw her play again at a tournament in Las Vegas.

Kim-Bustillos said she decided to commit to Sac State because she liked the location, coach, team and size of the school. She committed the same day she toured the campus according to Dedini, who said he was all smiles after the formal commitment.

“I was running in the men’s coaching office pumping my fist because I knew that we just got a player that was a program-changing player,” Dedini said.

Kim-Bustillos is currently the leading scorer in the Big Sky Conference with seven goals across 13 games.

Kim-Bustillos was described by both Dedini and junior goalkeeper Aaliyah Fesili, a teammate and fellow Hawaiian, as competitive, passionate, quick, skilled and technically sound with a strong soccer IQ.

“She is not a one-trick pony, she is good in about every aspect of the game,” Dedini said. “She is the complete package.”

Kim-Bustillos missed half of her sophomore season in 2018 to a shin splint that later developed into a stress fracture on her left tibia. She said that her shoes would hurt her feet, messing up her run and wearing her out.

Kim-Bustillos said that she played with the injury since her freshman year in 2017.

“I’d wait for my adrenaline to kick in for it to stop hurting,” Kim-Bustillos said. “But then came a point where it was so bad that my adrenaline couldn’t even kick out the pain.”

Ten games into her sophomore season, she decided to step away from the field to begin the proper healing process. Kim-Bustillos said she was in a walking-boot for seven months after initially being told she would be healed in four-to-six weeks.

Fesili said Kim-Bustillos’s teammates respect her for the way she trains and her commitment to the team.

“She is not one of those leaders that are verbally outspoken about things, but (one that leads) more through actions,” said Fesili.

Speaking about her return to the pitch after the injury, Kim-Bustillos said she feared not being the same player she was as a freshman.

“When I came back, I was worried that I fell behind the group,” Kim-Bustillos said. “Once I started playing, it wasn’t a big issue.”

“We made some tactic changes, defending better, but also fixed some off-the-field issues,” Kim-Bustillos said when discussing the main reasons for the team’s turnaround in 2019.

Fesili said the team took the time to strengthen their relationships by doing things like going out for lunch or studying in groups.

“Since my time here, I think the team chemistry (this season) has been the best,” Fesili said.

Dedini said the team chemistry improved this season due to the team not being plagued with injuries as often as last season. He also said he feels that this team is more mature than last year’s.

Although Kim-Bustillos has had individual success so far in 2019 with seven goals and three assists, her desire is to make it to the NCAA tournament – something last year’s team didn’t. The junior forward said she doesn’t set any personal goals because it is unnecessary pressure, and believes they don’t matter as much as the team goal.

“A goal of mine since I started at Sac was to play in the NCAA tournament, where all the winners play,” Kim-Bustillos said.