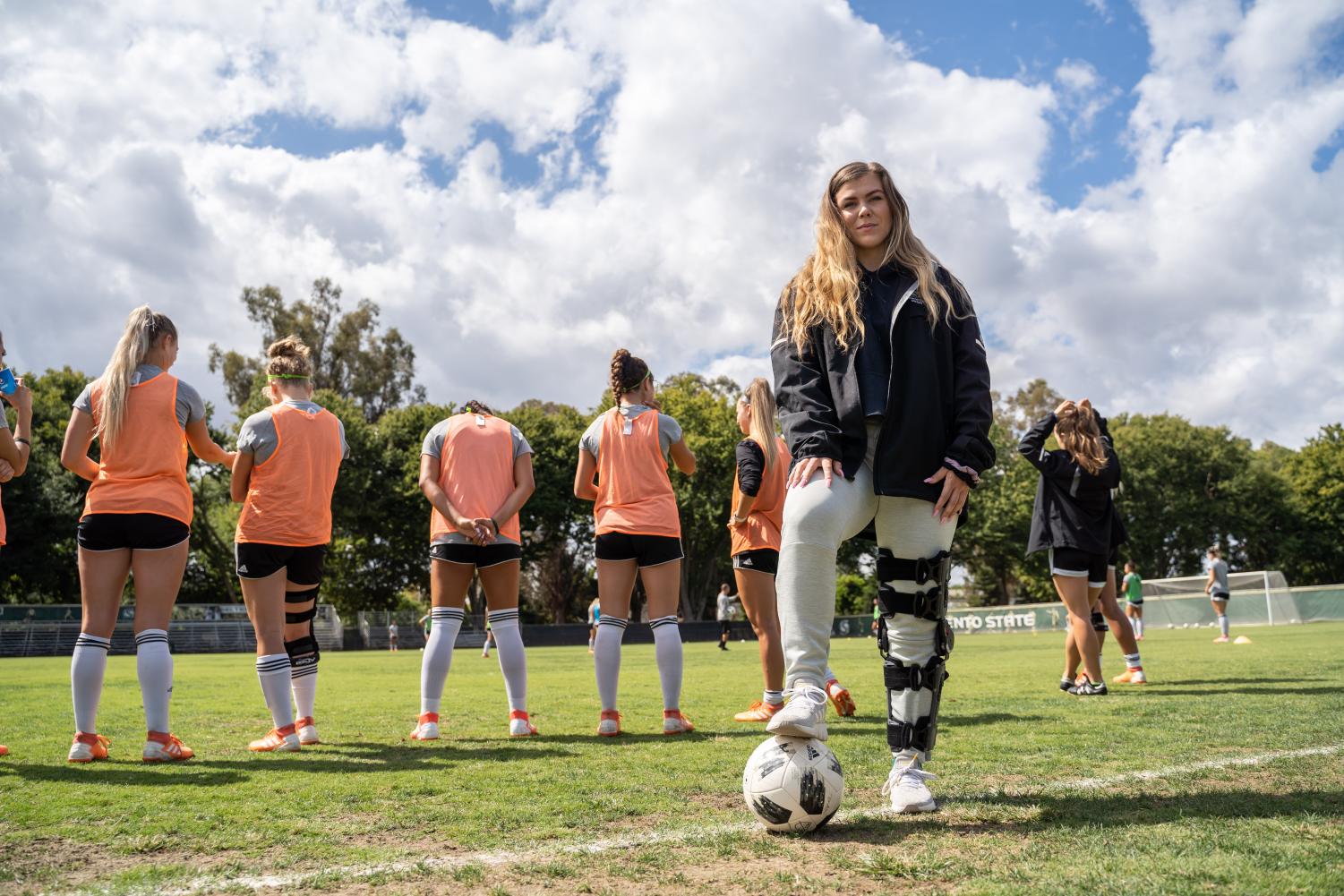 Sac State senior goalkeeper Kaylyn Evans poses for a photo on Wednesday, Sept. 18 at Hornet Field. Evans tore her ACL in the first team practice of her senior year on July 22. (Eucario Calderon)

Sac State senior goalkeeper Kaylyn Evans poses for a photo on Wednesday, Sept. 18 at Hornet Field. Evans tore her ACL in the first team practice of her senior year on July 22.

Kaylyn Evans looks forward to moving from soccer to nursing

Sacramento State senior goalkeeper Kaylyn Evans tore her ACL in the first practice of the 2019 season and is now focused on her future beyond the game of soccer.

Evans, who is a team captain, organized a preseason captain’s practice on July 22nd as an opportunity for players to practice before coaches are allowed to meet with players. The injury occurred during a possession drill named “Over the River.”

“My team was transitioning into defense, I went into a sprint and I carried a little too much momentum with me,” Evans said. “I planted with my right (foot) but my body was still moving forward. Then a girl played a ball across, I reached out with my right foot and then I fell and I just heard a pop.”

Hear from @SacStateWSoccer senior goalkeeper Kaylyn Evans as she describes making a folder of her injury process which helps her stay positive.@SH_Sports @TheStateHornet pic.twitter.com/4ch2kL2FEo

Evans knew immediately that she tore her ACL because her sister had the same injury twice before. She immediately thought of the steps she will have to take in order to recover and put the injury behind her.

The senior goalkeeper’s injury was a hard pill to swallow not only for herself, but for her entire team as well. The injury has forced Evans to miss her entire senior season.

“Kaylyn’s been our emotional leader for as long as she’s been here,” head coach Randy Dedini said while holding back tears. “She’s a big part of the team, she means a lot to the team and she’s a great leader for us. To have something like that happen, you know it’s tough for her, the coaches, and the team.”

During her recovery process, Evans is constantly trying to stay in the right mindset.  The senior started chronicling all the milestones of her injury, from the day she had her surgery to most recently riding a bike for the first time since the injury.

“Focusing on those little things and those little victories, so you can be grateful for what I’m able to do,” Evans said. “It’s amazing to me that my body has been able to recover from the surgery enough that I can go bike again.”

Evans is now focused on her career and future outside of Hornet Field.

Evans also expressed an interest in coaching soccer in the future.

“I just know that she’s great for us,” Dedini said. “Whatever she decides to do in the future, whether it’s with soccer, other sports or with other types of teams, she will be successful.”

Evans also tries to teach her peers that they are more than just a student athlete.

“Something that I try to stress to my team is you are much more than that and your sport does not define you,” Evans said. “It can be a part of you and it can enrich your life, but it’s not who you are.”

The senior goalkeeper’s positive influence on her teammates goes well beyond the game of soccer. 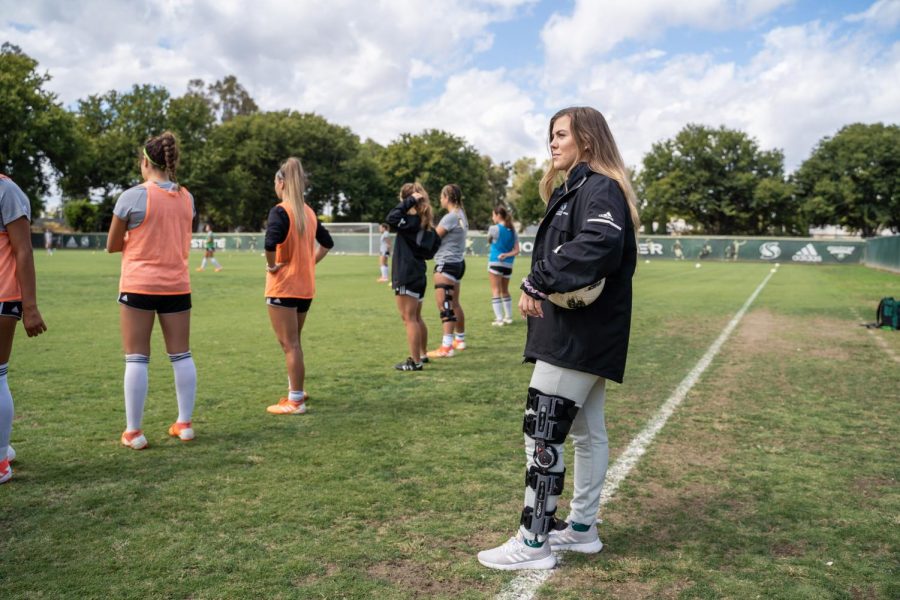 “As of last year, I had no idea what I wanted to do,” said Erika Sosa, sophomore forward. “I had to talk to Kaylyn, she’s really been my mentor in that aspect and now I know for sure I want to do sports marketing. She’s helped me get my classes right and connected me with the right people to know where I want to go in my field.

“I can safely say that Kaylyn has been one of the biggest influences in what I want to do in life.”

Despite the likely career-ending injury, Evans is currently in a happy place in her life because of the people she has surrounded herself with.

“I am truthfully the luckiest person on this entire planet,” Evans explained. “I can’t even express how much the people in my life mean to me. My family, best friends here and my friends from back home. They really touch my life and sometimes I’m not the best at telling them that.”