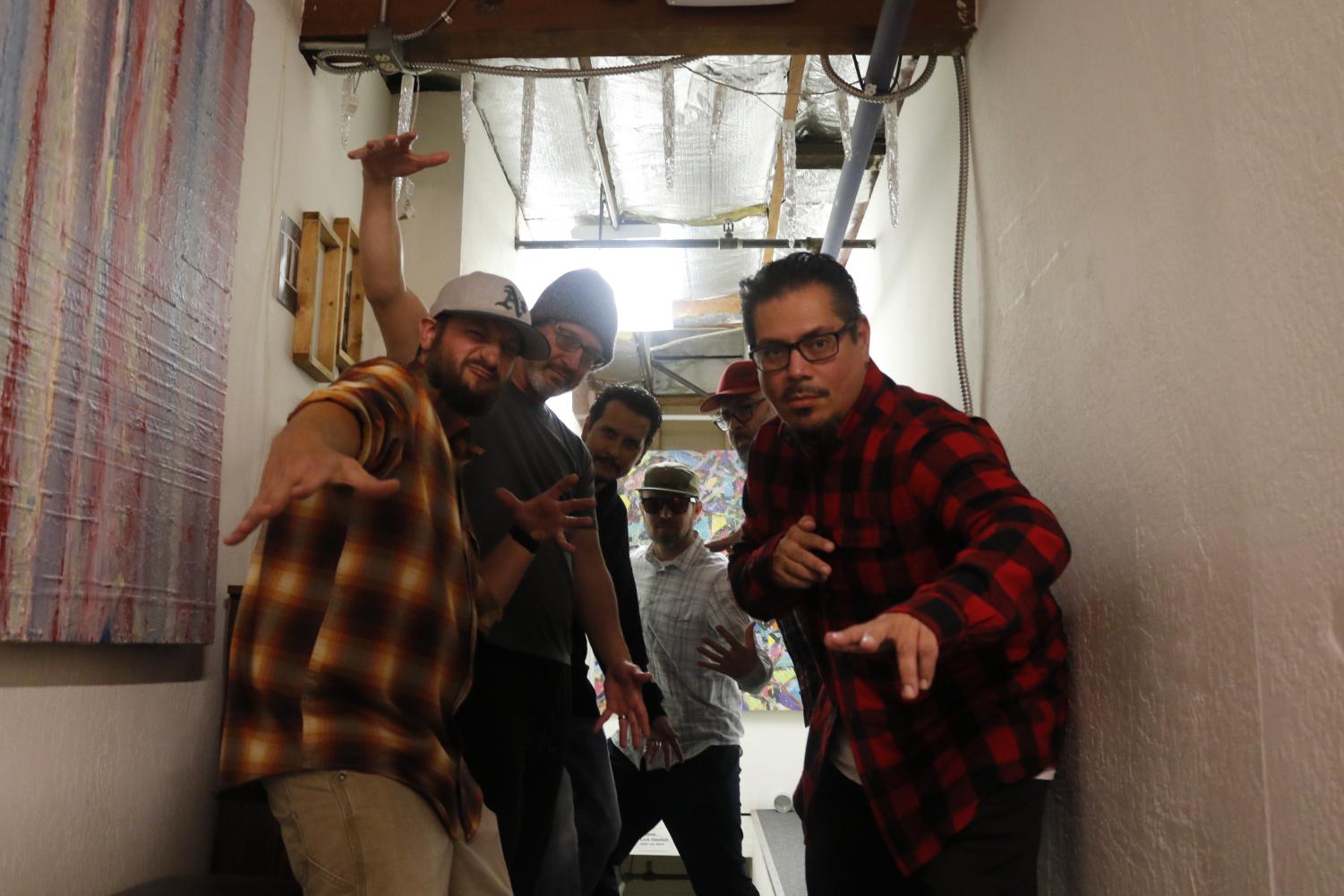 The lights are dim, and the dance floor is lively in Sacramento State’s University Union Ballroom on Thursday as Peligro Brass, a Sacramento-based Latin band, finishes up their jazzy Spanish brass cover of “Sweet Dreams (Are Made of This)” by Eurythmics.

“I’ve never heard anything like that before,” said Yuseli Campuzano, a social work major. “It’s really nice to see those songs become something different. It was a really interesting concept that I really liked.”

Peligro Brass’ musical stylings created an atmosphere that led the audience to move their feet and get on the dance floor as well. 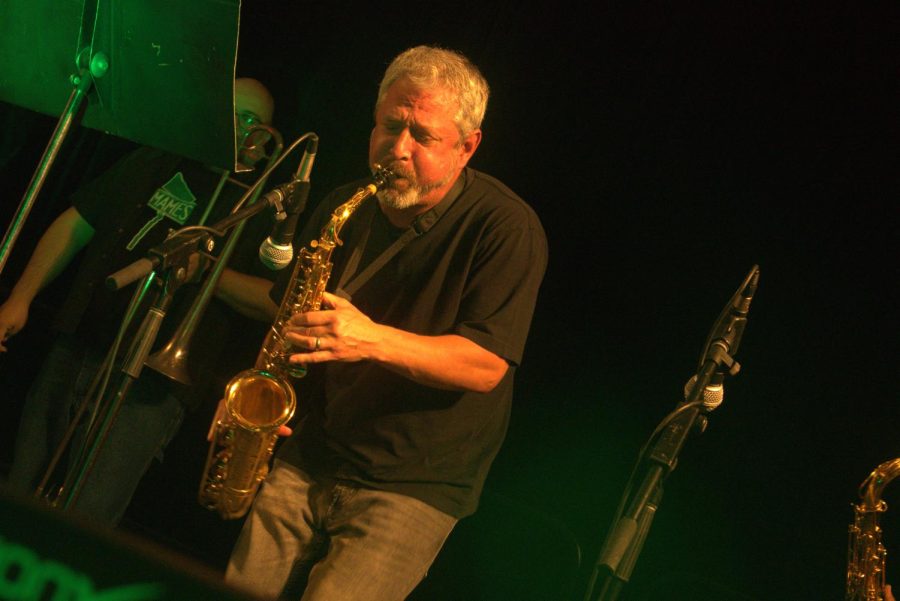 Gallery|5 Photos
Zachary Cimaglio
Michael Lapilusa takes center stage for a saxophone solo at the band’s performance at the University Union Ballroom on Oct. 28, 2021. The song transitioned to his solo smoothly without interrupting the rhythm.

“I think what’s really nice about this band is the way that they got people up and dancing. I didn’t expect it,” said Alana Mills, forensic chemistry major.

Sam Miranda, vocalist for Peligro Brass, said he never really set out to make a statement or message with its music as it was just for fun.

“We didn’t realize people were gonna be really receptive to what we’re doing as far as the style, doing these brass versions of some Latin stuff,” Miranda said.

The influence of Latin brass was not the only genre noticed Thursday night in the ballroom as jazz influences could also be found in the music.

“I really liked how they incorporated some of those Latino music elements into their sound,” said Fatima Donato, nursing major. “I’m a new fan of jazz, and hearing that just was such a unique and personal experience for me.”

The band gained popularity for its cover of Nina Simone’s “Don’t Let Me Be Misunderstood.” The band’s cover would land them a vinyl release record deal under Capital City Records in March.

Miranda added that the vinyl will also have a side-B of an original song he wrote called “Califa-Sol.” The band will also soon release two to three more songs on Spotify, iTunes and other digital services with its own respective music videos attached. Miranda has been making music and has performed previously at Sac State various times before but for his other band, Sol Peligro, which has been around for nearly 20 years.

Miranda added how whenever he is writing original music, he always incorporates his Latin roots which makes it easier for him to create Peligro Brass’ Latin rhythms. He started Peligro Brass last year in August during the pandemic out of boredom and due to Sol Peligro being on hiatus due to COVID-19 restrictions.

Miranda was in the studio with their music video director and noticed an instrument he did not know one of his friends could play before.

“We were going over this [music] video for Sol Peligro, and I look over in the studio and I see this sousaphone and I ask, ‘Who plays that?’ They said, ‘Oh yeah, Jared [Collins],’” Miranda said. “I was familiar with him, but I didn’t realize how well he could play the sousaphone. Long story short, I reached out and said, ‘Hey, maybe we should get together and jam because I’m bored out of my mind.’”

Miranda then asked some of the horn players from Sol Peligro to join Peligro Brass, and they agreed because he said they were also bored.

Miranda said he is inspired by bands such as Argentinian-based Los Fabulosos Cadillacs’ and Los Angeles band Mariachi El Bronx.

“It’s easy because with me personally when I write original tunes, I’m always thinking of Latin style,” Miranda said. “It’s funny though because growing up I was never into Latin music, I was a rocker as a kid. My writing style is always derivative, and I always take from the Latin roots. Nobody really does too much of a Latin beat and then get English vocals on it. We [also] have songs that have Spanish vocals over the Latin rhythms.”

Chris Tadina, Peligro Brass saxophone player and artist, joined last year when he was called up by Miranda as he is also a member of Sol Peligro.

Tadina worked with Miranda not only musically on Peligro Brass, but also did the band’s “Dia de los Muertos” inspired face paint and skeleton cover art.

“We both kind of came up with an idea,” Tadina said. “He just mentioned that he wanted skeletons, and then we talked back and forth a little bit about how it would look. It’s pretty democratic, and Sam trusted my vision and my abilities.”

Tadina’s face paint was shown in the band’s music video for “Don’t Let Me Be Misunderstood.”

Aside from the art and aesthetics being designed in-house as Miranda described, all audio and music video production are made through a group very close to the band called Cider Sessions.

Cider Sessions is described by Guerrero as its take on National Public Radio’s Tiny Desk but for the Two Rivers Cider company.

Guerrero said how he asked Miranda to record a Cider Sessions video after he saw Sol Peligro perform at the Holy Diver bar in 2019.

“We started off with friends of friends, so we had a lot of folk and bluegrass and kind of blues musicians, because they were just like word of mouth,” Guerrero said. “From there we went from a strictly folk, grassy kind of start to reggae, Latin groups, R & B, some jazz and hip hop.”

Guerrero said they are slowly getting back into creating more Cider Sessions videos on their YouTube channel after they were forced to stop due to COVID-19 restrictions and the busy schedules amongst members.

Miranda said he hopes to soon create more inventive covers and perform at street corners or even at a taco truck to continue riding the band’s popularity wave.

“There’s no amps, nothing electrical about us at all whatsoever, which is another crazy thing because we go from guitar amps, all this stuff and a big old drum set to timbales, congas, horns and me,” Miranda said. “I just hope what [listeners] take away is just a good time, some fun, some excitement [and] just let loose.”

Miranda said the band will “bunker down” during the winter to record and release new music. 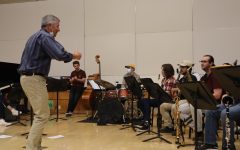 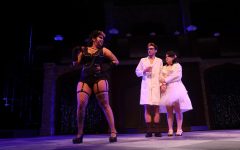 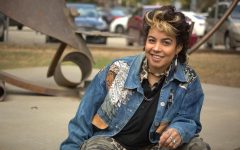 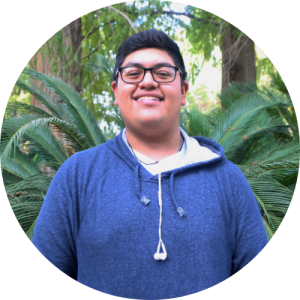 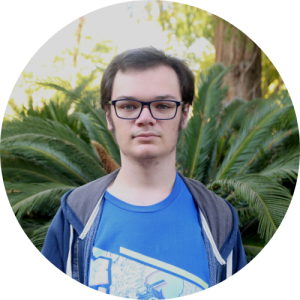