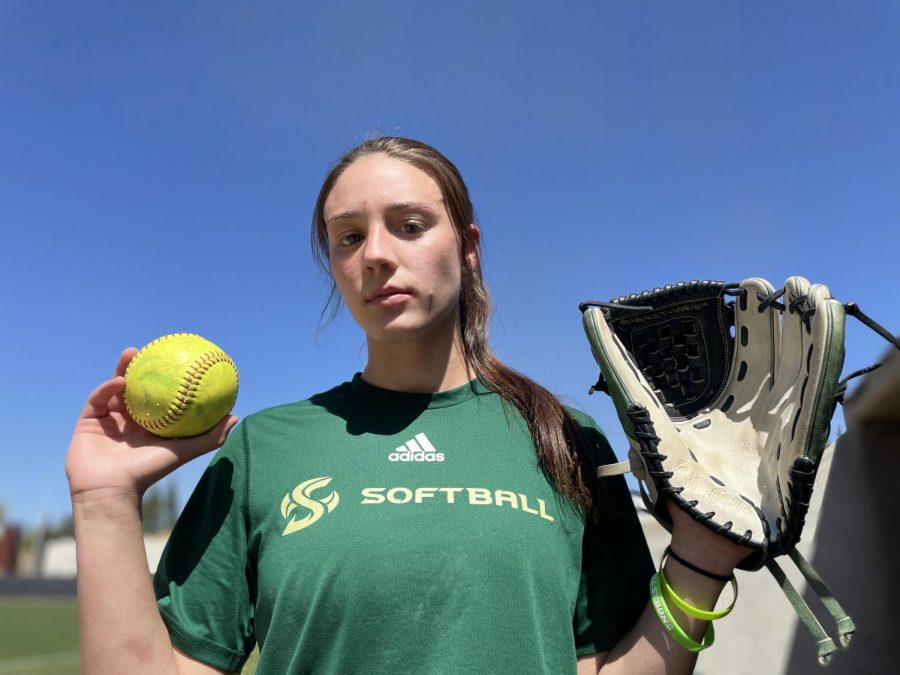 Sacramento State sophomore Marissa Bertuccio poses for a photo during her team practice at Shea Stadium at Sac State on Tuesday, March 30, 2021. Bertuccio leads the Hornets in strikeouts, wins and games pitched this season.

For sophomore pitcher Marissa Bertuccio, every game could be another shutout. Standing at the pitcher’s mound in the center of the field, she stares down the opposing hitter, checking the sign from her catcher and turning the ball over in her hand. As she winds up and whips it towards the plate, hours of practice and honed instincts take over.

Bertuccio is the Hornets’ strongest pitcher, having already thrown 3 shutout games this season. Following up on a successful career as a travel-team pitcher in high school, Bertuccio joined Sac State in 2019.

Softball is not the only sport she’s ever played, but Bertuccio said it’s the one she fell in love with. She started playing at the age of 9, and has been a pitcher ever since.

“Sports have always been a big thing in my life, and as I got older softball became my thing,” Bertuccio said.

Having started on the Hornets softball team as a freshman, Bertuccio’s 2020 season proved her to be a capable pitcher. Securing a better than 5-to-1 strikeout to walk ratio and ending the season as the team’s ace. Bertuccio struck out 47 batters and sported a dazzling 1.88 ERA in nine starts during the 2020 season.

In 2021 Bertuccio has been a workhorse for the Hornets, starting 20 of the team’s 33 games and logging nine of their 12 wins on the year. She has 11 complete games, a steady 3.54 ERA and leads the team in virtually every other statistical pitching category.

In her senior year of high school, Bertuccio took home the title of Female Athlete of the Year, as well as MVP in the Central California Conference. This came after having taken her league’s title of Pitcher of the Year in her junior year.

Bertuccio maintains a team-oriented approach to life and sports. She said the support of her family has been incredibly critical to her development as a player and as a student, with their involvement helping keep her focused and on-track.

Being a softball star means non-stop training, which Bertuccio said involves practicing for four hours a day, four to five days a week. It has become such a regular part of her life that she hardly notices it anymore. She said she recalled working on her pitching technique in her house, using a balled up sock to feel the rhythm of the pitch. Her style, she said, developed later in life.

Hornets head softball coach Lori Perez, serving for her eighth season as coach, described  Bertuccio as a prime example of what it means to play on a team.

“She’s somebody that cares a lot about her teammates,” Perez said. “She wants to see them succeed, she enjoys training with them, she enjoys the banter that goes along with being a part of the team.”

Perez, having worked with a lot of players, said Bertuccio has the qualities of a great softball player.

“She’s mentally and physically and emotionally ready to go every single time she takes the mound,” Perez said.

Softball has been a lifelong project for Bertuccio, one she said caused her to miss summer vacations and used up much of her freetime. Bertuccio said that she would do much of her homework on car rides to and from practices, writing essays on her phone and studying in the backseat.

Travel has been especially difficult now that she is in college, with the team frequently staying in hotels and relying on their laptops to catch classes and complete their work.

Despite softball taking up so much time, Bertuccio has established close bonds with her teammates.

Madison Martinez, who previously played with Bertuccio through the travel team circuits and is now studying at Merced College, says she has known Bertuccio for more than 10 years. Martinez said that Bertuccio had always shown a remarkable ability to adapt as games progressed, adjusting to batters throughout the course of the game to push her game to the next level.

“She was able to capitalize on and learn the hitters as the game went on, so she was very good at adapting to the situations we were put in,” Martinez said.

Martinez said she is grateful for the opportunity to have played with Bertuccio for such a long time, saying that no matter their wins or losses they enjoyed themselves. Despite practice and games five days a week, Martinez said they always enjoyed their time, whether it was playing softball or engaging in activities away from the team.

Bertuccio’s focus on the team-side of things has allowed her to prosper as a pitcher, despite being formidable in her own right. Even when speaking of her shutout performances, Bertuccio credits her teammates’ play as a reason for the success.

“They make all the routine plays, but then they make incredible plays, diving catches and all that,” Bertuccio said. “And it feels really good that they have my back. I know, yeah, I might not beat this girl, but if she beats me I know my team has me.”

As she finishes her sophomore year, Bertuccio continues to show time and time again that she has earned her spot at the top.

Bertuccio has had a strong start to her 2021 season, and as they move into conference, maintaining team cohesion is a must. Bertuccio says that the key to success, whether in softball or anything else, is to surround yourself with people that are worth caring about.

“Surround yourself with good people,” Bertuccio said. “The people around you shape you in a lot of ways that you might not realize.” 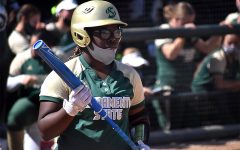 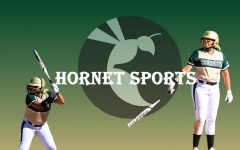 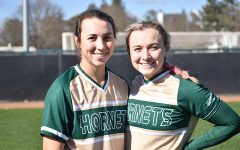 Softball team sisters share connection 'only a sibling will understand' 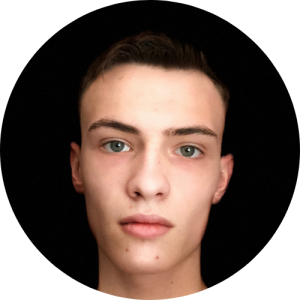 Jacob Holden, staff writer
Jacob Holden joined The State Hornet spring 2021 as a staff writer on the general assignment desk. He previously wrote for his high school newspaper, the El Camino Eagle Eye, as opinion editor and as an intern staff writer for the Elk Grove Citizen. He is majoring in political science-journalism and plans to do policy analysis after graduation.