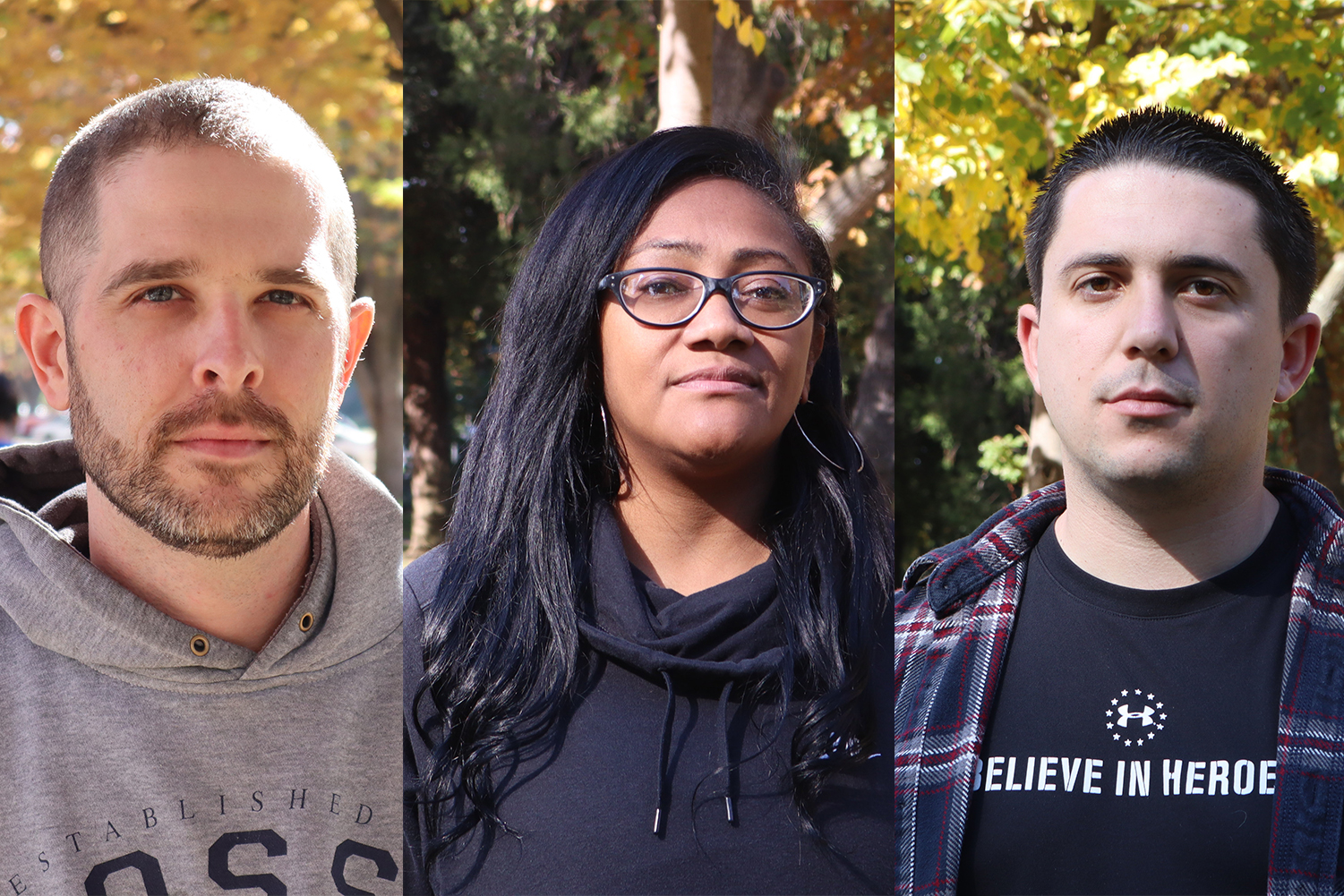 From left to right, in this photo illustration are Sac State student veterans John Rayome, Christina Seui and Jacob Owen.

‘I was in the air playing God’: Sac State student veterans reflect on their military service

The GI Bill makes it possible for veterans with an honorable discharge to receive full or partial tuition benefits, depending on time served, as well as stipends for course materials and housing.

At Sacramento State, the Veterans Success Center provides resources to veterans who choose to return to school.

As of 2018, 495 veterans were enrolled as students at Sac State. The State Hornet spoke to three current students who are actively using their GI benefits.

“It could be the most boring thing in your life, and the most adrenaline-filled thing the next moment, so it’s a wide range of experiences,” Jacob Owen said regarding his time in the Marine Corps.

After spending four years in the military, Owen is now majoring in history at Sac State.

Owen joined the Marine Corps at the age of 18 in 2011 and was deployed twice as an infantryman.

Owen was first stationed in Yemen for four months until the September 21 Revolution in Sana’a, Yemen forced him out.

“It’s when the Houthis invaded the capital, and so we watched the city destroy itself,” Owen said.

Owen then deployed to Kuwait for just under three months, then to Afghanistan for another six months. While deployed, Owen conducted over 100 missions.

Owen said he left the Marines in 2015 in order to “dictate his own life.”  He enrolled at Sacramento City College to finish his general education courses before transferring to Sac State.

“I told myself when I got out, because I had the GI Bill, that I might as well use it,” Owen said. “If I didn’t have the GI Bill, I would have never gone to school.”

Originally from Sacramento, Owen works at the Veterans Success Center at Sac State while pursuing his degree in history. Owen is currently pursuing a career as a firefighter and plans to begin EMT training on the weekends next month.

Owen said that he appreciated his time spent in the military.

“(The military forces) you to grow up. I feel for me personally if I would have stayed home nothing would have come of it,” Owen said. “(The military) gave me a chance to be deprived of freedom so I appreciated it a little bit more.”

Originally from Oxnard, California, Seui was stationed in Kansas and was deployed to Iraq for nine months, just four months after giving birth to her daughter. She then deployed to Afghanistan for one year.

“It was really hard, because when I came back, she was already walking,” Seui said. “And then after my second tour she was already running. I missed the first three birthdays.”

Seui described her initial transition back into civilian life as “seamless.” She worked at a Comcast call center for seven years, and it wasn’t until she decided to go back to Sac State in 2016 that the idea seemed daunting.

Seui is currently double majoring in kinesiology and mathematics and said she hopes to become a teacher. She also works at the Veterans Success Center.

Seui said that during her time in the army, her deployment to Afghanistan was the most difficult.

“We did the grunt work, we were the ones that went in,” Seui said. “They gave commands and we did whatever they told us to do.”

Seui worked supply but spent months patrolling with her unit.

During her time in Afghanistan, electronic communication was banned for a period due to security reasons.

“We had to literally run our own line,” Seui said.“We weren’t supposed to, but my battle buddy and I were like, ‘I’m about to go run this line’ so we can go call our people. We got into so much trouble.”

She said that the day that her group was told they were going back home, she started a countdown.

Seui said that having her daughter made her reevaluate her plans in the army.

Seui said that the biggest thing she realized after getting out was that she knew she wanted more. After graduating she plans to be a physical education teacher and then become a math teacher.

“I was in the air ‘playing God’ as it were, and so those are the things that stick with you,” Rayome said regarding his time in the Air Force.

Rayome served from 2009 to 2015 and was stationed in Hurlburt Field, Florida. He attended Sac State from 2005 to 2009  before joining the Air Force, but did not finish his degree.

Rayome’s parents both served in the Air Force and met each other while stationed in Bedford, England. Rayome said that he always knew he would serve.

“If our guys were coming to find you, you were going to have a bad day,” Rayome said. “They were either going to get information or take you out of the equation.”

After leaving the military, Rayome came back to Sac State to finish his degree. Rayome said that he had a difficult time transitioning.

Rayome said that he turned to drugs and alcohol to cope.

“Right when I got out, it was a lot of drugs and alcohol. I’m not condoning it, but it definitely is a whole lot easier than trying to actually deal with it,” Rayome said. “Now therapy can be difficult to get for vets, but I’ve found a system that works for me and I’ve got my buddies.”

“Bringing damage and destruction into the world, I feel that it’s now time for me to give back,” Rayome said. “I really want to work with vets, disabled vets like myself, or maybe kids coming from a rough family, but I definitely know for a fact that I want to get into non-profit.”

DISCLOSURE: Ashton Byers, the author of this story, is a veteran. Byers served in the Air Force from 2010 to 2017.