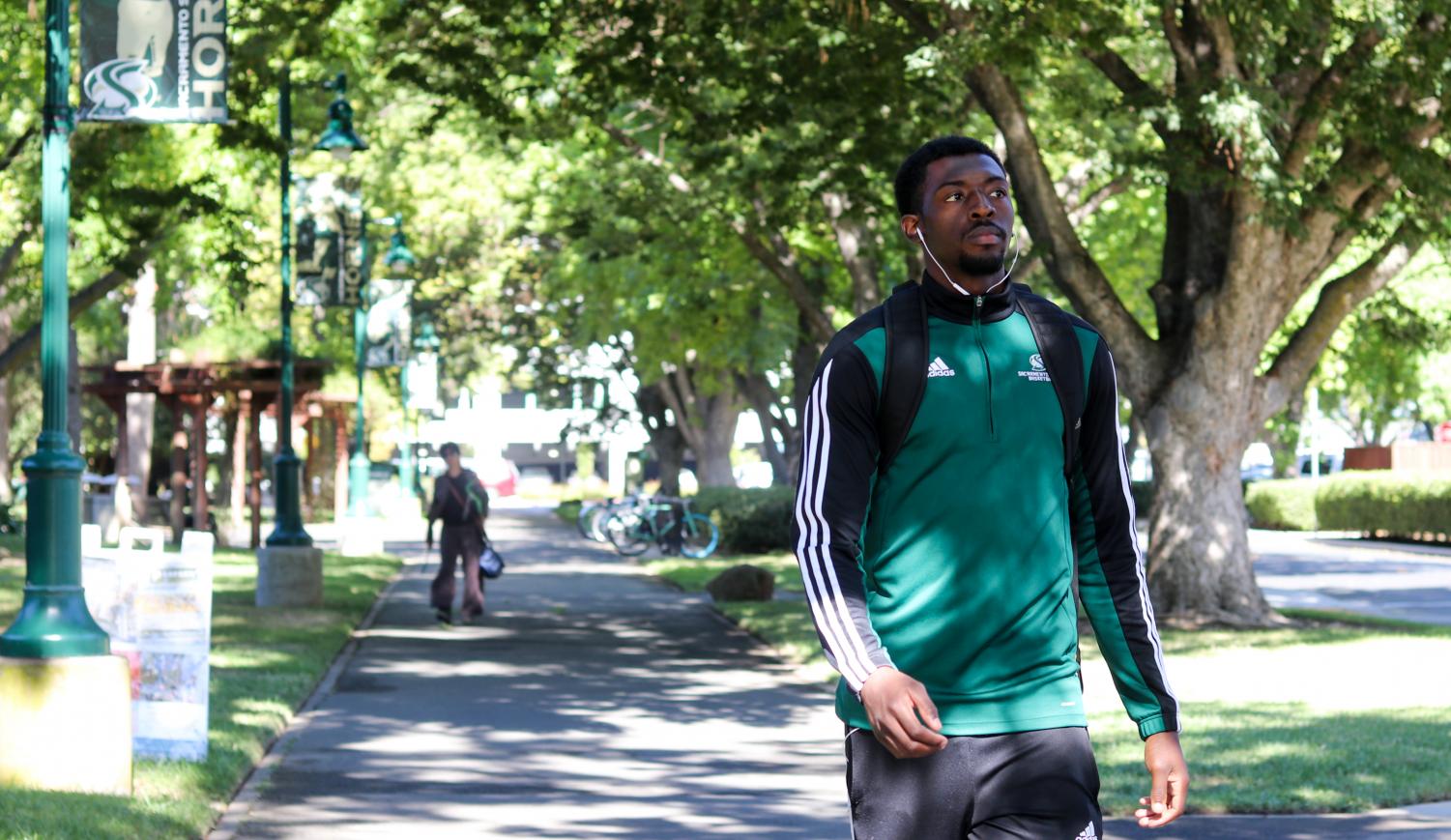 Not every Sacramento State student knows Joshua Patton’s name, but there’s a chance they’re familiar with his face.

Patton’s visage can be found all over the university on promotional posters for the athletics program. He can also be spotted in the flesh on most days, engaging in one of his favorite pastimes — taking a nice, long walk.

“I just love getting out,” Patton said. “I’m constantly moving.”

Patton is entering his fifth year at Sac State and his fourth as an active player on the men’s basketball team. When speaking with members of the team or the coaching staff, Patton’s frequent walking schedule always seems to come up.

It’s an odd hobby in the modern age, where most students spend their time between classes scrolling through their phones or on their laptops. But the people closest to Patton all agree that he’s not a typical 22-year-old.

Taking walks around campus is one of the most uncomplicated hobbies that a college student can have, yet Patton finds a lot of value in it.

“I just love being outdoors. It’s something simple,” Patton said. “I’m a simple person and I like simple things.”

Patton’s simple, down-to-earth mindset is probably something that helped earn him the designation of team captain for the upcoming season.

The senior’s standout play on the court likely didn’t hurt in that regard, either.

As a junior, Patton averaged 13.0 points and 6.4 rebounds. Despite often facing double teams, Patton has managed to explode for several big games, including a 34-point performance against Northern Arizona University last season.

“His potential is through the roof,” Katz said. “He definitely would have the ability to be one of the better big men in the conference, maybe the best one.”

Patton is most known on the team for his tenacious defense, where he poses a huge problem for opposing teams trying to score near the basket. His 1.7 blocked shots per game were the second-best mark in the Big Sky Conference last season.

“He plays really hard,” Graves said. “A lot of his impact comes from the defensive end.”

The intensity he displays on the court is nowhere to be found during his walks, however.

“Seeing all these trees around campus, all these shaded areas, all these little turkeys running around, squirrels running around. It helps my mood a lot of the time,” Patton said, smiling. “It just gets me in a zone where I’m just at peace. (I can) see all the stuff that I’m blessed with, being at a university like this.”

On the court, Patton is quickly coming up on the school record for blocks. He’s only 11 stuffed shots away from the historic mark.

But until the season starts Oct. 30, he’ll have to settle for blocking out the noise in his head with his stress-reducing trips around campus.

“When I’m really stressed out with stuff, I just go on a walk,” Patton said. “It just helps me relax. It just clears my mind and lets me refocus.”

Patton knows he has a lot of work ahead of him captaining a Hornets team that hasn’t finished with a winning record since 2014-15, the year he committed to Sac State.

“This year, we’re just looking to make a big jump,” Patton said. “We’re looking to go and really be one of the teams that compete for the championship in the Big Sky Conference.”

According to Katz, the team will be looking for a lot from Patton this season.

“He is our team captain,” Katz said. “He’s a leader. Someone we can count on. He sets the tone for our team.”

If you’re on Sac State’s campus, you can look for Patton, too. If the sun is out and the birds are chirping, there’s a good chance you’ll see him walking on by.