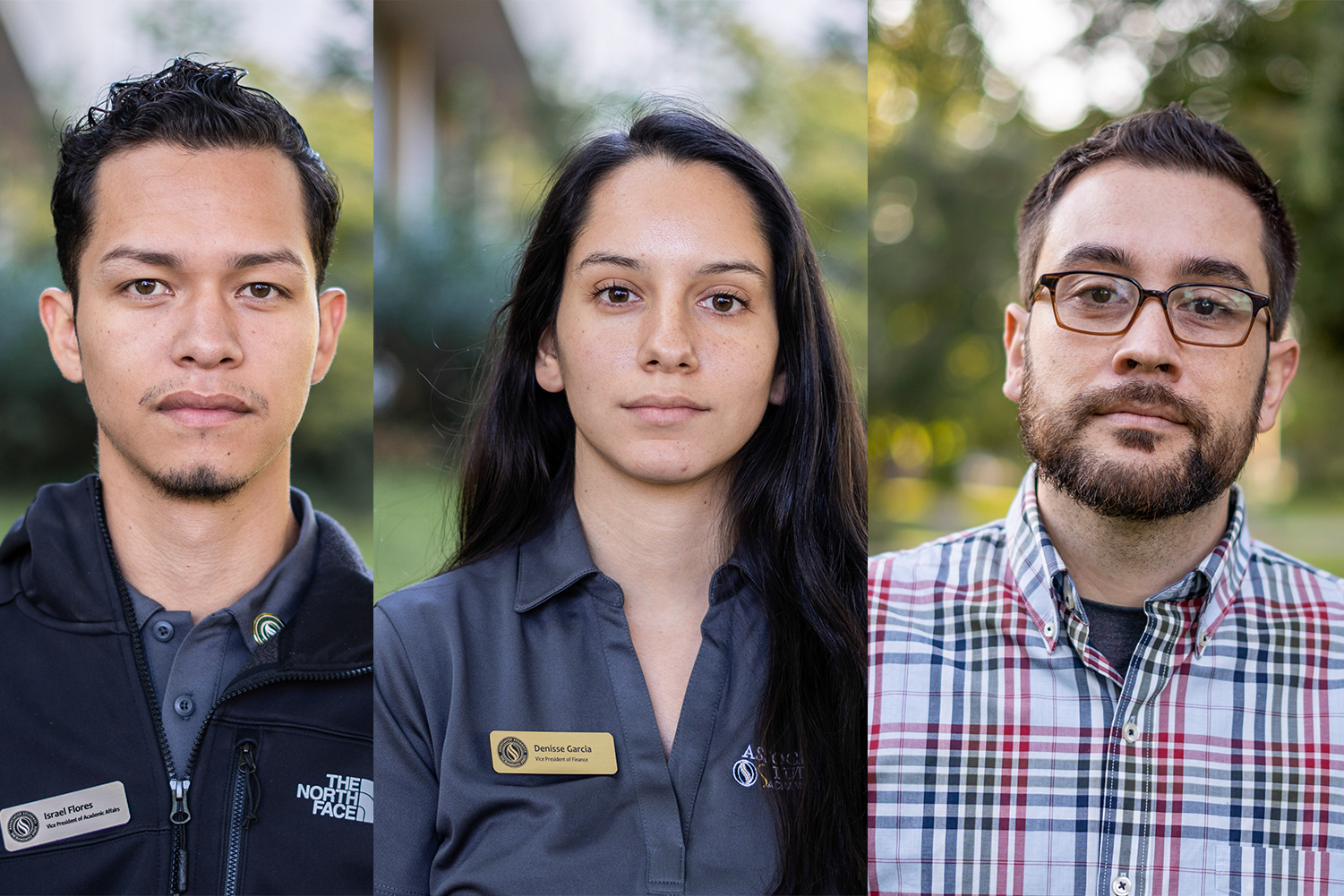 From left to right, in this photo illustration are DACA recipients Israel Flores, Denisse Garcia and Erik Ramirez. The California State University recently granted funds for schools in their system to offer legal services to DACA recipients. (Eucario Calderon)

From left to right, in this photo illustration are DACA recipients Israel Flores, Denisse Garcia and Erik Ramirez. The California State University recently granted funds for schools in their system to offer legal services to DACA recipients.

Seven years ago, President Barack Obama announced an immigration policy that allowed those who were brought to the United States as undocumented children and youth to lawfully stay in the country, under the Deferred Action for Childhood Arrivals, DACA, program.

In 2017, President Donald Trump declared the program illegal and attempted to shut it down.

But lower federal courts resisted, and it was ruled that those who had already filed for DACA previous to Trump’s decision could continue reapplying. As of September of this year, the cancellation of the program is on hold by court order.

RELATED: The Faces of DACA at Sac State

These decisions have been challenged by the current administration and are now being reviewed by the Supreme Court, according to the National Immigration Law Center.

As of August 2018, there were an estimated nearly 700,000 active DACA recipients in the United States. DACA does not provide a clear path to citizenship for recipients, known as Dreamers.

These funds allowed for Sac State to add a third immigration lawyer to their pre-existing program.

The State Hornet spoke to Sac State Dreamers about their experience being undocumented. Here are their stories. 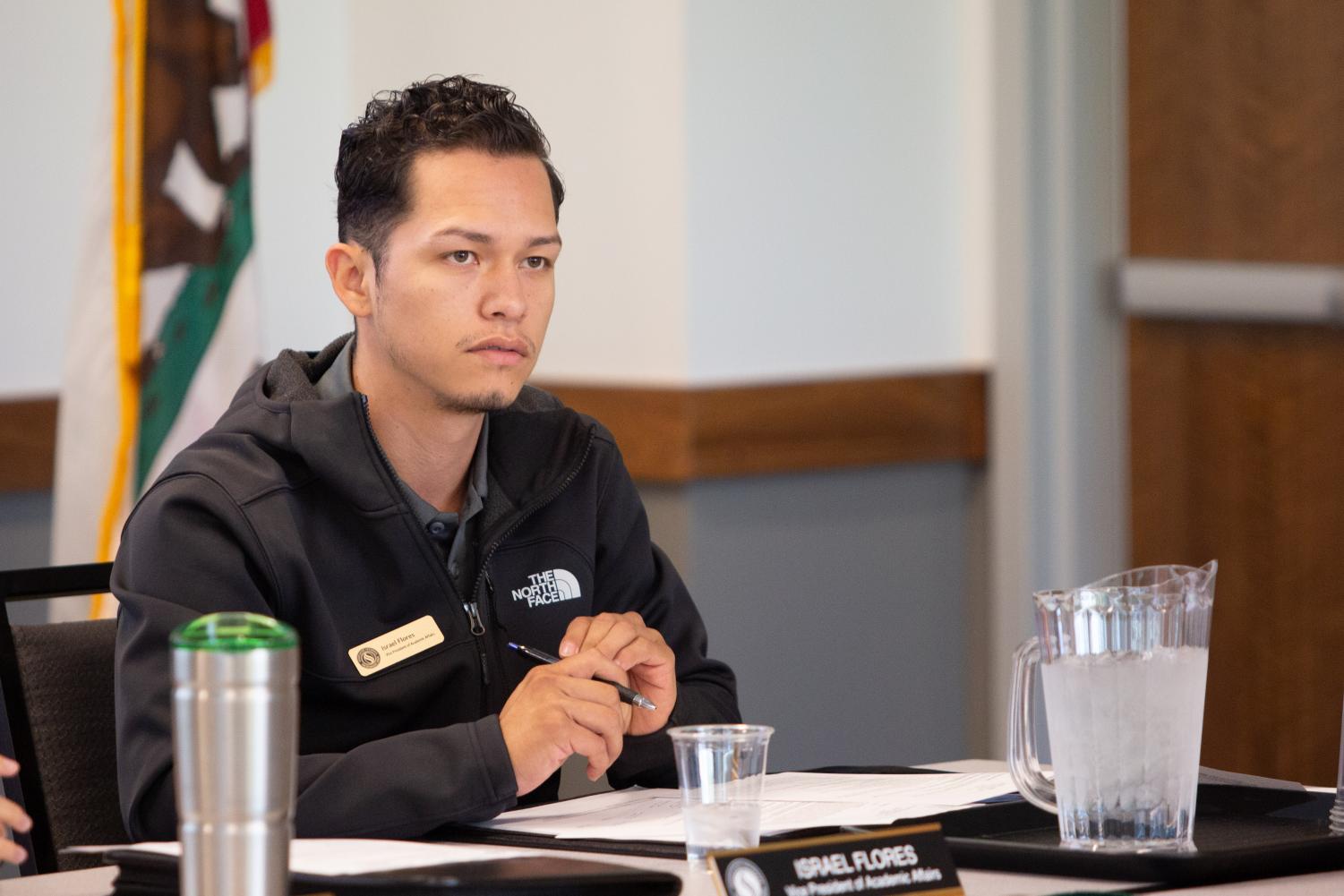 Sac State student and ASI Vice President of Academic Affairs Israel Flores takes notes during an ASI meeting Wednesday, Oct. 4. Flores is a DACA recipient and is currently studying communications with a minor in history.

When Israel Flores graduated high school, college was not an immediate option.

Flores did not qualify for financial support from the state. When DACA was put into effect, Flores was able to have his community college fees waived.

Raised in Sacramento, Flores is currently a Sac State communications major with a minor in history. He is also ASI vice president of academic affairs and a student assistant at the Serna Center.

He said he hopes to graduate this upcoming spring semester.

Flores’s mother was his and his younger sister’s only provider until he was able to get DACA. His sister, also a DACA recipient, was still in high school when Obama was in office and the policy was passed.

“(Obama) came out of the darkness to help all these people, and now it’s being taken away,” Flores said. “I have the knowledge, but I can’t use it to my advantage.”

After Flores obtained his associate’s degree, instead of furthering his education, he worked to support his family.

“I didn’t want to burden my mom,” Flores said. “I had to drop out of school for a while to help pay for my sister’s schooling.”

Flores said once he was able to return to school, the transfer process to get to a four-year university was still complicated.

(Obama) came out of the darkness to help all these people, and now it’s being taken away. I have the knowledge, but I can’t use it to my advantage.”

“When I was transferring, they wouldn’t give us the papers we needed because it’s different when you’re (not) a citizen,”  Flores said.

Once he finally got to Sac State, Flores said he was motivated to become more involved on campus. Flores joined student government in hopes of helping students of all backgrounds.

“Whether that’s professionally or to get them involved, if we could help in any way we can, we are here,” Flores said of ASI.

Flores said he sought help from his colleagues and that one advised him to check out the DRC on campus.

“Once I found their office, it was way smoother. It was an easier transition,” Flores said.

Flores said if there was more awareness about DACA and the undocumented, then students would not have to fall behind in their career paths. Flores said that stereotypes influence discrimination against Latinx people.

“We’re stereotyped. We’re being charged as a whole, not as an individual,” Flores said. “You have to know where you came from to know how things have been shaped. There have been different ways of seeing things. Racism doesn’t make it any easier”.

Even after completing his bachelor’s, Flores’s work permit could be taken away by the Trump administration.

“When you’re done with college, what are you going to do if you can’t work?” Flores said. “It’s frightening.”

Flores said he remains hopeful and is considering graduate school. 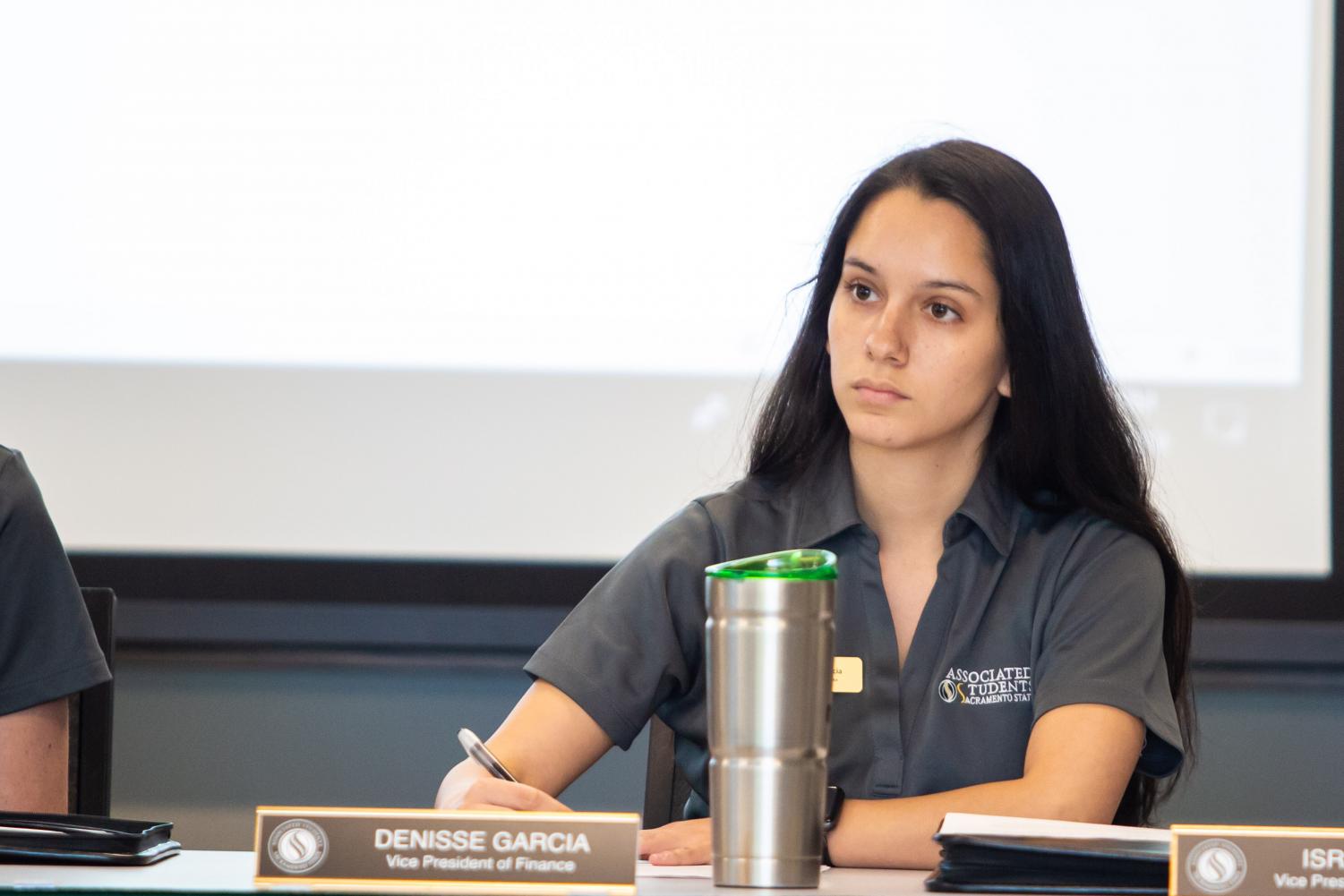 When Denisse Garcia heard about Trump’s decision to end DACA, she had a breakdown.

Suddenly, the stability Garcia worked so hard toward was in danger.

“I realized everything was flipping on me,” Garcia said. “I thought I had my life figured out, then out of nowhere, nothing in my life is secure.”

The road to DACA wasn’t easy for Garcia. As she began her college career at Sac State, she had to seek extensive legal support.

“My first couple times, I had to pay lawyers,” Garcia said. “My parents wanted to make sure everything was right and that I wouldn’t get denied.”

Garcia said when she first applied for DACA, she never received a follow-up on her case. After making a report, she was told her application was considered lost or stolen and was still asked to reapply and pay the $500 fee again.

I realized everything was flipping on me. I thought I had my life figured out, then out of nowhere, nothing in my life is secure. ”

Garcia was referred to California Congresswoman Doris Matsui’s office by the DRC. There, she was connected with a staff member regarding her DACA service cards.

“When you know who to contact, then they are able to help you,” Garcia said. “Like when Matsui’s office called on my behalf, it was within a few days that things happened rather than months and months.”

Even with proper DACA registration, Garcia said she still struggled with financial instability as she did not have permission to work.

“Everything I did, I had to do on my own like every other first-generation student,” Garcia said.

Although she received several scholarships, her expenses were mostly covered with credit.

“I didn’t have my employment card, I didn’t receive financial aid,” Garcia said. “My rent and food — everything was covered by credit cards.”

Garcia said that during her period of financial instability, her family in Visalia, CA, was extremely helpful in providing funds for costs, and that without the support of her family, she would not be where she is now.

“I have a really strong support system back home,” Garcia said. “One way or another, they would find the money I needed. I knew I could always rely on them.”

Garcia currently studies business and is ASI’s vice president of finance. She is also a student assistant in the office of the vice president and chief financial officer.

Garcia said she was referred to the DRC through an honors professor she trusted.

There, Garcia joined the Dreamers Seminar, where she said she made connections that opened up possibilities and positivity to move forward.

“You have to lean on other people,” Garcia said. “You can’t fight the world on your own.”

Garcia said she wants to promote sustainability with ASI on campus and plans to graduate in this upcoming spring semester. 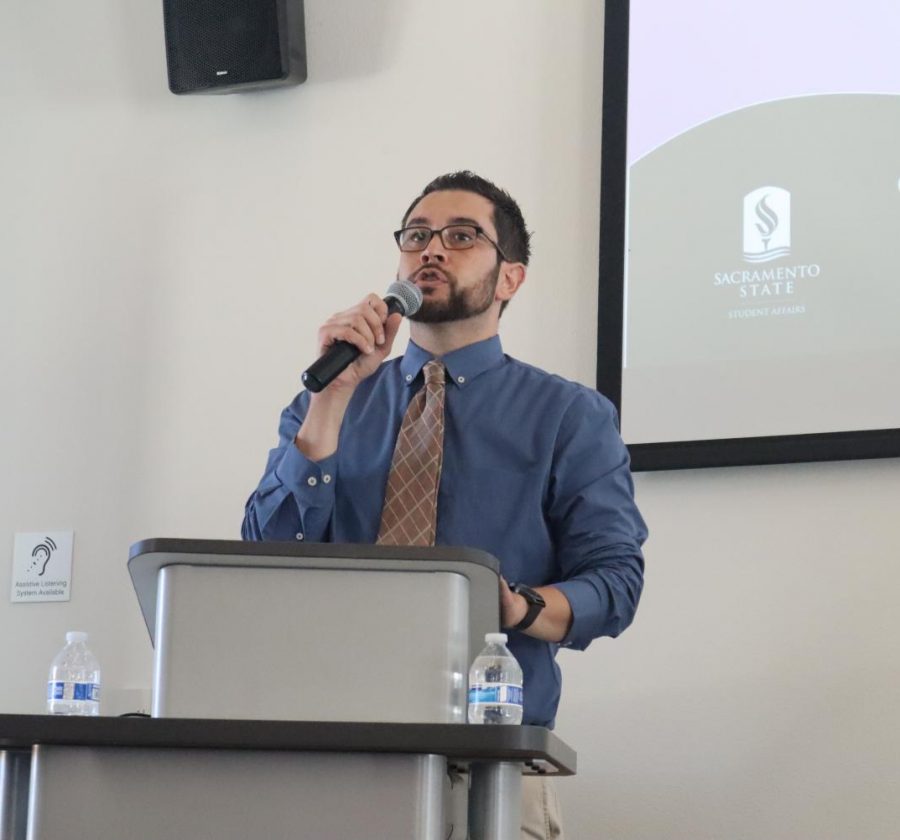 Ramirez was very involved with his high school, serving as student president of his class and graduating with a 4.3 GPA. Although he received several scholarships, there was no access to financial aid for him to further his education.

Passionate about pursuing an education, Ramirez went on to graduate from community college in 2005. Although he had a degree, his status limited him from working legally.

“I was out of school for ten years,” Ramirez said. “I had to find creative ways to make a living.”

When DACA was implemented, he applied and decided to continue his education. Despite the ten years and six months of waiting for his DACA service cards, Ramirez came to Sac State in 2015 and graduated within two years.

His plan after graduation was to pursue a career teaching. He enrolled in a graduate program in the communications department, where he landed a job as a graduate assistant.

“Having DACA opened a lot of doors,” Ramirez said. “I first started as a graduate assistant, then a teaching associate. I was teaching while working part-time, but I wanted to get involved.”

Ramirez then became ASI director of graduation studies on campus. This position later made him realize that he wanted to work in student affairs and services.

“I love Sac State,” Ramirez said. “I think it’s incredibly inclusive, sensitive and accepting of students like me.”

He later became a student assistant at the DRC, where he worked for a couple of months until he became the point of contact for the center.

“I’ve always been interested in how race, ethnicity, and culture impacts peoples’ communication,” Ramirez said. “And the messages we create and how we interpret them.”

Ramirez graduated in May 2019 and became the full-time coordinator for the Dreamers’ Resource Center.

DACA gave us the opportunity to go back to college and pursue various careers. They gave you this opportunity to do better for yourself and your community. But then, they take the rug right out from you.”

Despite his success, Ramirez still fears the potential termination of DACA.

“DACA gave us the opportunity to go back to college and pursue various careers. They gave you this opportunity to do better for yourself and your community,” Ramirez said. “But then, they take the rug right out from you.”

Ramirez took a moment to recognize not only DACA recipients, but also undocumented immigrants who never received DACA.

“For someone to pursue higher education with so much uncertainty, that is admirable,” Ramirez said. “In a way, I’m lucky. I have this privilege to be protected from deportation to a certain extent. Not all students have DACA.”

Ramirez said he will continue helping undocumented students like himself despite the fear of removal. He said his goal is for students to achieve their goals and aspirations.

“Staying positive can be difficult, but there are folks that want to see you succeed,” he said. “Let that be your driving force. It might get tougher, but it can be done.”