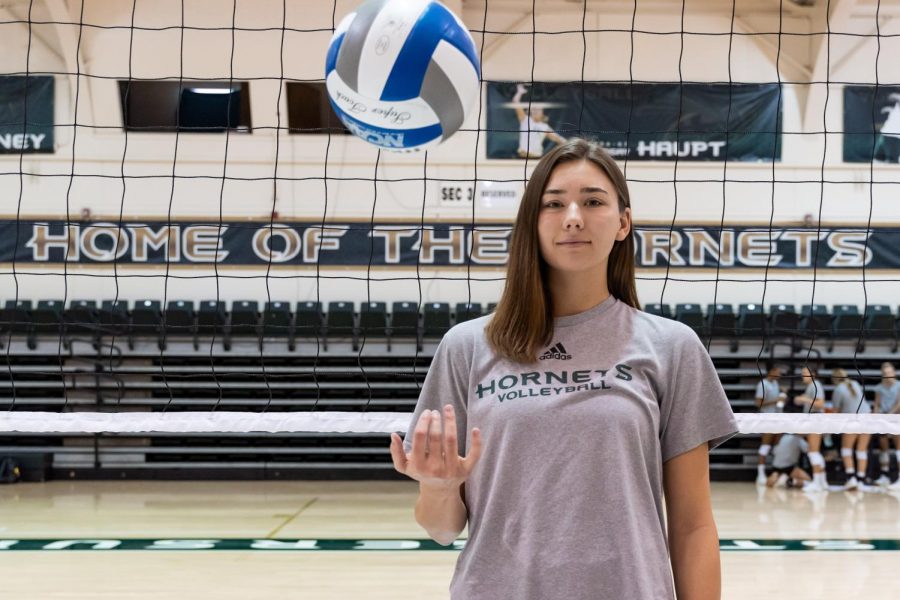 Senior outside hitter Sarah Davis poses for a photo before practice on Monday, Sept. 23 at The Nest. Davis is the co-captain and lone senior on a young Sac State volleyball team.

Sacramento State senior outside hitter Sarah Davis decided to try out for her high school volleyball team with some friends on a whim after playing softball for most of her life and deciding it was time for a change.

Two weeks into the season on the high school freshman team, Davis said she was pulled up to the varsity squad where she remained for the rest of her high school career. Now, Davis is a co-captain and the lone senior of a young Sac State volleyball team.

The 21-year-old native of Paradise Valley, Arizona said she instantly clicked with the atmosphere and history of Sacramento, making it an easy decision to pursue the next chapter of her life at Sac State.

“Once I came here, I was obsessed with all the trees since in Arizona we don’t have trees,” Davis said. “Once I met all the girls on the team I knew this was the right program for me. The coaching staff was all really welcoming, so it was my best experience that I had out of all the schools I visited.”

RELATED: SPORTS PODCAST: What do Hornet volleyballers do before games?

Since the beginning of her sophomore year, Davis has combined for 771 kills and 417 digs. This season alone, Davis has already recorded 202 kills and 106 digs.

Over her four years at the collegiate level, Davis has seen growth in her passing skills. According to head coach Ruben Volta, Davis’ increased aggressiveness and great ability to see the court have turned her into a valuable offensive asset for the team.

As an all-around player, Davis has started games at three different positions during her career at Sac State, including right-side hitter, setter and outside hitter.

“Last year we had a couple injuries to our setters,” Volta said. “So, we ended up having her set. She had never set in her career at any level, I don’t think. She stepped in and did it for a whole weekend and did a great job.”

Her combination of career statistics and more recent accomplishments such as being named MVP of the Sacramento State Invitational attest to Davis’ success on the court. However, her leadership, as commended by Volta, showcases an inside look at her character.

According to Volta, Davis leads the team with maturity and grace, setting an example for younger team members.

“She’s just such a steady person, a steady personality and just a really hard-working player,” Volta said. “Her leadership is invaluable to us. She has a mature calmness to her and a really competitive side as well.”

This maturity extends off the court as well, as she serves as a role model for her teammates, even during downtimes, said sophomore setter Ashtin Olin, Davis’s roommate.

“She’s our house mom,” Olin said. “She’s the oldest in our house. She’s just very sweet, very understanding. I feel like I can go to her for a lot if I’m struggling.”

Like with any athlete, Davis’ success did not come without time and dedication. In season, she spends 20 hours a week training. During the offseason, Davis said she attempts to stay active by working out every day and climbing Camelback Mountain, her favorite hiking spot back home in Arizona.

During the summer, Davis spends time playing with her old club volleyball team back in Arizona, Revolution Volleyball Academy, a team that Davis said has a great amount of influence on her game.

“A lot of the older girls I used to play club with, I used to look up to them a lot because I was so new to it,” Davis said. “Just watching them play and watching them grow was just so exciting to me and then when I finally got to play with them now, I’m like ‘Wow, I got this good because of watching them.’”

Davis’ level-headed gameplay style and mindset have allowed her to overcome the challenges of keeping up with a game surrounded by a constant state of momentum. Humbly, she attributes much of this to her teammates, yet she still finds the motivation within herself when it counts the most, proving her role as a leader.

“We definitely all have to work together to maintain that energy level,” Davis said. “At the end of the day your teammates can only help you so much, but you have to work hard and help your other teammates match your energy, too. It’s important to be the leader who strives to have the most amount of energy so everyone else can have that same amount of energy.”

A two-time Big Sky all-academic selection, Davis has been given an innumerable amount of opportunities and travel experiences from the Sac State volleyball team. From small victories like improving upon her passing skills to major achievements like traveling to New York and China, Davis emphasized her fondness and love for the game and her team.

“I think I’m just most proud of the friendships I’ve built here and our ability to work hard and go out on the court and just work as a family to win games,” Davis said.

The communications studies major is set to graduate in the spring. After graduation, Davis said she plans to continue her education to pursue a career as a pediatric dental hygienist.

For now, Davis prefers just to live in the moment and enjoy her last season at Sac State.

“I think it was the best decision I made,” Davis said on choosing to play volleyball. “Even to this day, I’m still learning new things and still think it is so fun.”