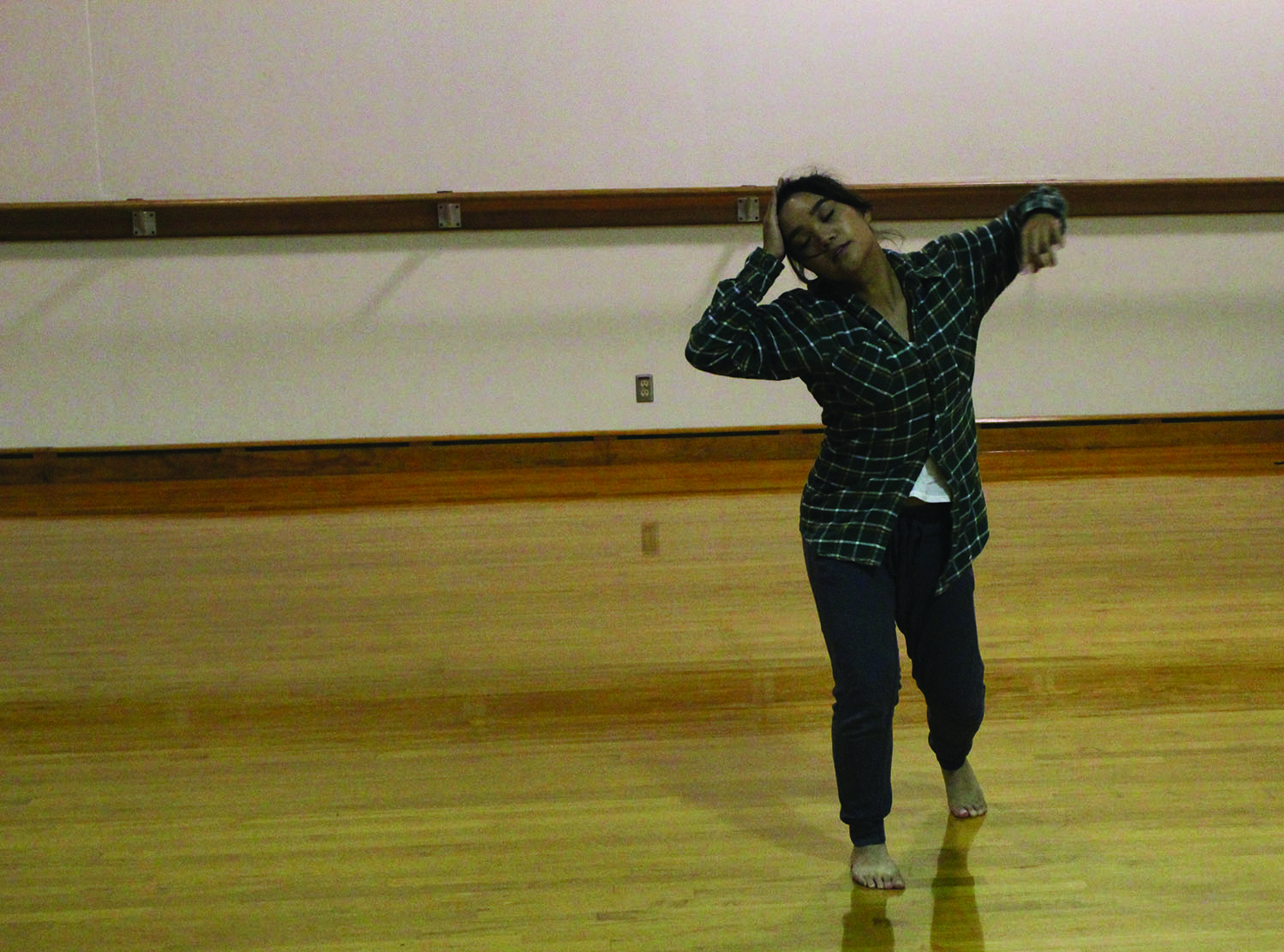 Amy Alejandro dances her own choreographed routine to Justin Bieber's 'Life is Worth Living' at Yosemite Hall on Friday Oct. 12, 2018. Alejandro is a sexual assault survivor who uses dance as an outlet. (Robby Sanchez - The State Hornet )

Amy Alejandro dances her own choreographed routine to Justin Bieber's 'Life is Worth Living' at Yosemite Hall on Friday Oct. 12, 2018. Alejandro is a sexual assault survivor who uses dance as an outlet.

Dancer uses her craft as a healing mechanism

For Sacramento State student Amy Alejandro, dancing is more than just a passion, but rather a means of distraction, expression, a coping mechanism and ultimately, a form of salvation.

“Once I’m in [the studio] with all my members, I forget everything that has happened,” Alejandro said. “They are the ones helping me up when I’m pushing myself down. Otherwise, without them, without dancing and without Sac Modern, I wouldn’t be here.”

She said that over the course of five years — from 2013 to early this year — her brother-in-law Russell Galanto would sexually assault her.

From touching and grazing, to filming her and watching her while she was changing in her room or in the bathroom showering, the repeated assaults occurred in her own home, where Galanto, Alejandro’s sister Alyssa, and the rest of their family were living.

“It was like he got used to my college schedule,” Alejandro said. “He knows when my parents leave for work [and] when my sister leaves for work. He just knows how everything works, so I just feel like he used it to the best of his advantage. The [instances] I remember are the ones where I felt scared, where I felt really dirty.”

According to the Sacramento Police Department, it wasn’t until March of this year that Galanto was arrested on charges of sexual battery, annoying or molesting a victim under 18 years of age and photographing or videotaping an undressed person in a private room or place.

Alejandro said that the court case — where Galanto pleaded not guilty — is ongoing and that the next trial date is set for December.

Alejandro said that when she first started noticing Galanto recording her, she thought it was her own imagination. As it happened more, she came to terms with the reality of the situation.

“I don’t know if it was for his own self-pleasure or if he was posting it anywhere,” Alejandro said. “I just felt like an animal in a zoo just being watched for someone else’s entertainment. I dealt with all the touches and the cameras and photos just for my sister and niece. Instead of telling people, I just used dance as an outlet.”

But a week later, Galanto was still living in their family home.

“Everything happened so fast,” Alejandro said. “The following week, we called the police and they arrested him. [Galanto] was lying blankly in front of my father saying, ‘I would never do that to Amy. She’s like my little sister.’ ”

Alejandro said she hasn’t spoken to Alyssa or her niece since the two of them and Galanto moved out.

Around the time that Alejandro decided to tell her sister and eventually her family what was happening, Sac Modern’s third annual charity showcase was underway. The charity the hip-hop dance team partnered with last December was the National Alliance on Mental Illness, a Sacramento non-profit organization that offers support and awareness for mental health issues.

For her piece, Alejandro decided to prepare choreography to Justin Bieber’s “Life is Worth Living,” a song that she says is very straightforward in the delivery of its message.

“No matter how hard or how sad you feel, at the end of the day, life is worth living,” Alejandro said, describing the song’s message. “You just have to push through it.”

Alejandro said that creating choreography to the song helped her get closure and convey a message to the audience.

“Because of all the emotions I’m feeling, it makes my dance more meaningful,” Alejandro said. “It makes the audience members feel something. Even though that’s the whole intention behind why we perform and why we dance, I’m not only benefiting the audience, I’m benefiting myself.

“Since I can’t say anything to the people that it’s supposed to be for, I’m just letting it all out [on stage].”

Alejandro said that on the inside, she’s always thinking about her sister and her niece. She sometimes blames herself, wondering if a scenario in which she hadn’t said anything would have protected her family from the pain of losing part of her family.

Alejandro said that if she could give her past self advice, knowing what she knows now, she would have told herself to get out of her own little world and realize what’s going on at home.

She would have told herself not to practice self-harm just because he hurt her, to not blame herself for what he did to her. She said she would have reminded herself that she never gave him a sign or confirmation that allowed him to touch her.

“Does a so-called brother really touch you in that way?” she said. “I would’ve told myself, ‘I know you’re scared but don’t be. He shouldn’t have done it and you should just stand up for yourself and do something about it because it’s not OK and it could get worse.’ ”

For her sister Alyssa, Alejandro records videos of herself talking, as if the two of them were having a conversation, sharing puns and inside jokes, despite everything that is happening.

”If her and my niece see the videos and letters I’m doing for them through this hard time, at least they know that I’m thinking of them every day,” Alejandro said. “[I’m] doing all of this just in case something happens to me and this is how we end things — on a bad note and not seeing each other as family.”

At the prospect of her sister reading her story, Alejandro said she is unafraid.

“I just hope she knows that she can do that too if she’s suffering,” Alejandro said. “I hope that this is a message for any woman that is in the same position as me no matter how severe or how minor it is. Being mistreated as [women], we have to remember somehow that we have a voice.

Ever since Alejandro began sharing her story with the people around her, she said those people have praised her strength in the face of vulnerability to do something about her situation, calling her a hero.

“I’ve been using my vulnerable part and my dancing to [thank] those that have been supporting me,” Alejandro said. “Not only through my dance, but supporting me in fighting in trial against him, giving me the confidence to say something to him and to just keep going.

One Response to “Dancer uses her craft as a healing mechanism”