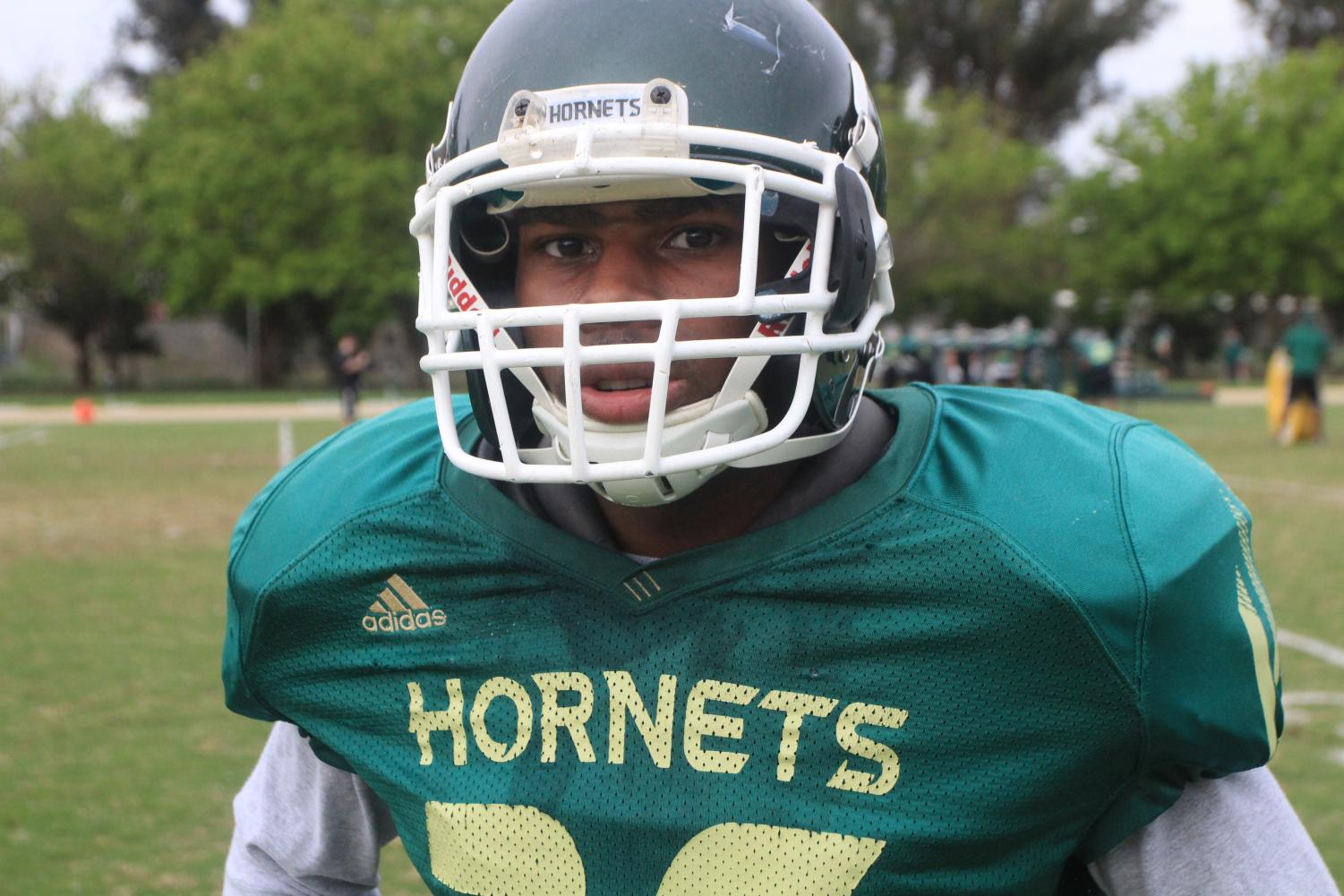 Sacramento State sophomore Daniel Evans earned the opportunity to compete with the football team during the spring practice season on March 6. Within the coming weeks, Evans will learn if he’s made it onto the football team as a walk-on cornerback. (Eric Jaramishian - The State Hornet)

Sacramento State sophomore Daniel Evans earned the opportunity to compete with the football team during the spring practice season on March 6. Within the coming weeks, Evans will learn if he’s made it onto the football team as a walk-on cornerback.

Despite size, sophomore strives to make football team as a walk-on

When Sacramento State sophomore Daniel Evans came to campus, he had two goals in mind — to be a good student and to be an even better football player.

Stunting his growth in the latter is Evans’ small frame, which is 5-foot-7 and 145 pounds.

However, these disadvantages didn’t stop Evans from participating in Sac State’s annual walk-on tryouts and earning the opportunity to practice with the football team during spring ball on March 6.

Evans, 19, is from Inglewood and it’s there where he recalls growing up in a rough neighborhood with rampant gang activity all around him.

“My parents always kept me on the right track,” Evans said. “They always made me, my brother and my sister realize that school is always first before any sport.”

Despite these teachings, Evans said he wasn’t the best student, with an estimated GPA of 2.8 in high school.

“I just had trouble really applying myself,” Evans said. “I feel like I am applying myself a whole lot better here (at Sac State), higher education and all that.”

On the field, Evans started playing football when he was just 4 years old. From there he went on to play youth football throughout his childhood. 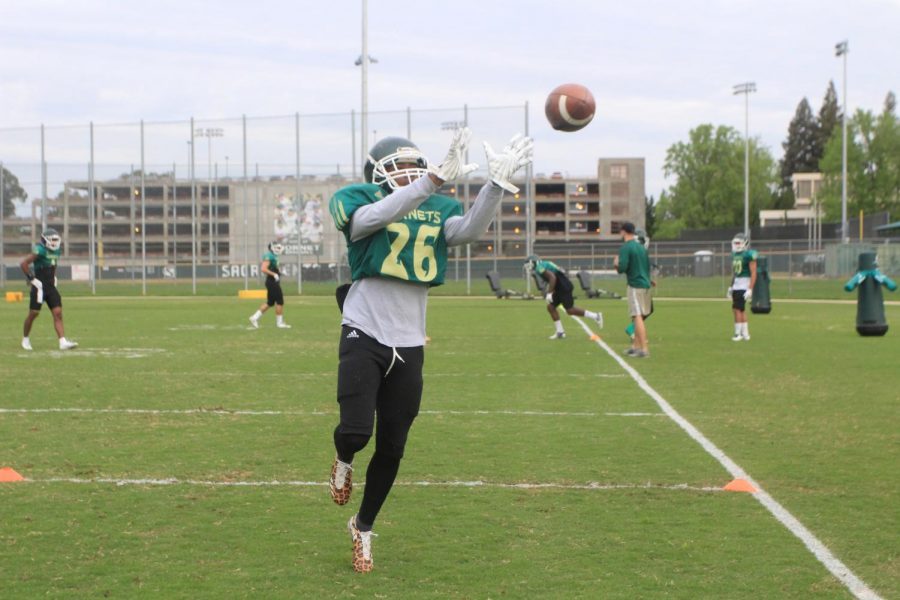 Eric Jaramishian – The State Hornet
Sacramento State sophomore Daniel Evans executes a catching drill while practicing with the football team on Tuesday, April 10, 2018. Evans earned the opportunity to train with the team while the coaching staff decides if he will be on the roster during the fall season as a walk-on.

Evans eventually attended Dorsey High School in Los Angeles — which required him to take an hour bus ride to campus from his house every day — where he started off as a running back in his freshman year.

By the time he made the varsity team as a junior, Evans made the switch to cornerback. However, he never started and didn’t even get to play many games during his senior year.

“My coach told the team that if I was a little bit bigger and a little bit faster, I would be a top recruit because he said nobody listens like me or works harder than me, and I never missed practice,” Evans said.

A couple of years later, Evans participated in his first walk-on tryout for the Sac State football team and he didn’t make the cut. But he responded to this disappointment by using the money he had earned during his summer job at the Zimmer Children Museum to buy equipment to improve his skills as an athlete.

“I got myself in better shape, and the effort was a lot better at this tryout (on March 6),” Evans said. “Just giving it my all as if it was my last chance at the tryouts.”

The effort clearly made a difference for Evans after the Sac State coaching staff offered him an opportunity to compete as a cornerback during spring practices from March 6 to Friday.

“He is a really good learner, and he has a really big heart for the game,” said Sac State coach Jody Sears. “I feel like he’s done a really nice job fitting in and buying into the teams standards and expectations.”

This month-long stretch, which features 14 practices and one spring game, will determine if he officially makes the team as a walk-on.

“Now I have to remember all of my plays, maximize my opportunities and better myself as an athlete,” Evans said.

More than anything, Evans said he wants to show the coaches that he can play with his bigger and faster teammates.

“As a walk-on, of course, you are going to be the underdog,” Evans said. “The guys that got recruited, they’re the guys with the talent, but I feel like I have talent too.” 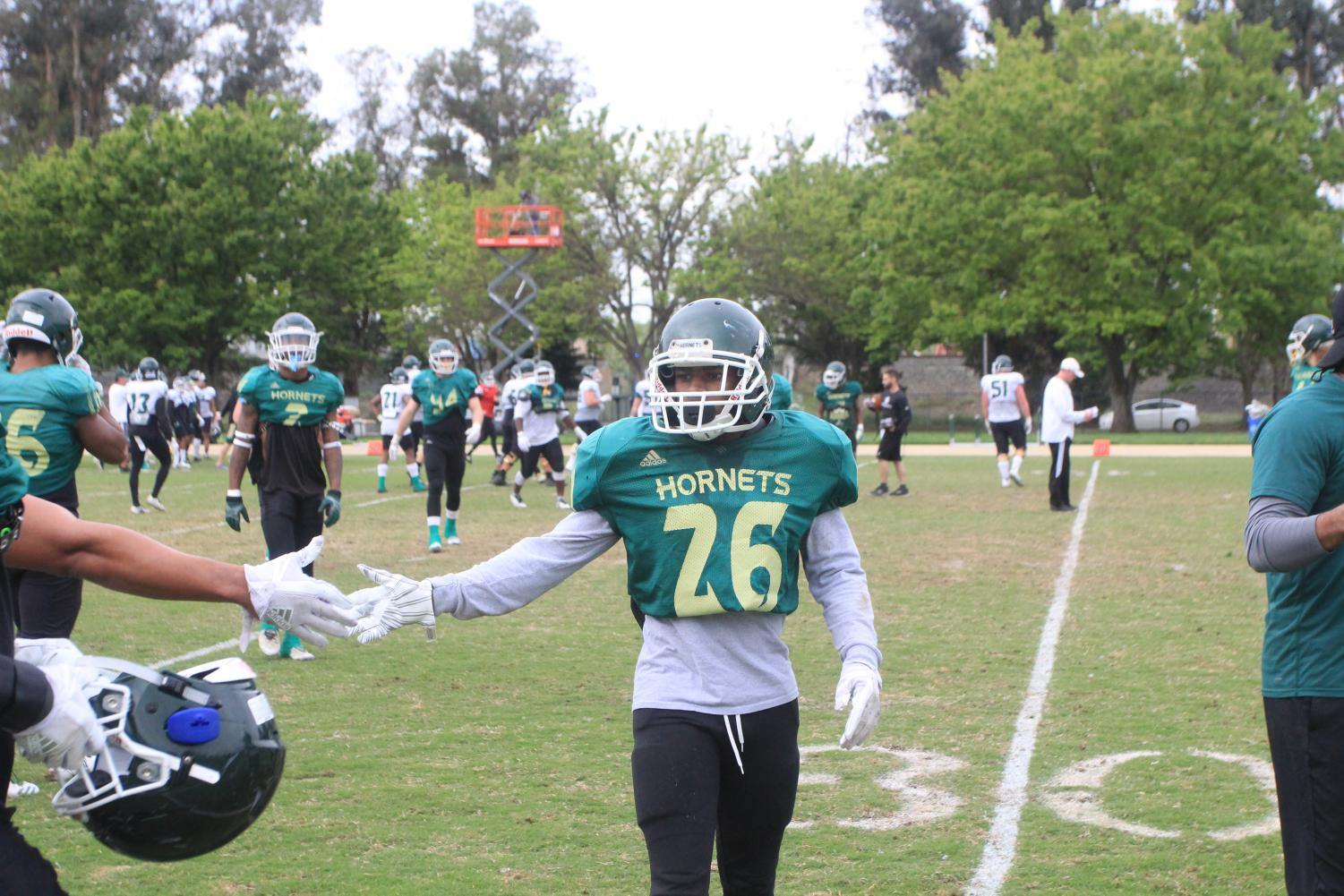 Eric Jaramishian – The State Hornet
Sacramento State sophomore Daniel Evans, middle, celebrates with a teammate after a successful drill at football practice on Tuesday, April 10, 2018. Evans earned the opportunity to train with the team while the coaching staff decides if he will be on the roster during the fall season as a walk-on.

Evans also said that he wants the chance to earn a football scholarship and appreciates the coaches for giving him the opportunity to practice and feel like a part of the team.

“This is probably the best coaching staff I have ran into so far, and I have been playing football for a long time,” Evans said. “They don’t let me feel like the odd man out and make me feel like I’m supposed to be here.”

Players on the team such as sophomore running back BJ Perkinson have not only welcomed Evans with open arms, but they believe in him too.

“I think he has a strong chance of making the team,” Perkinson said. “He is doing pretty good at practice, is learning a lot of new things that he didn’t know, and he is improving a lot.”

Sears, who earned a spot on the Washington State University football program as walk-on when he was in college, said Evans has shown good quickness and short-distance burst throughout practices.

Although a decision hasn’t been made yet, Sears has expressed that the team has a need at the cornerback position.

“We have a couple of more practices,” Sears said. “We will have a big personnel meeting next week and decide what our roster is going to look like come fall with the news guys and see how many spots we got, so (Evans making the team is still a possibility).”