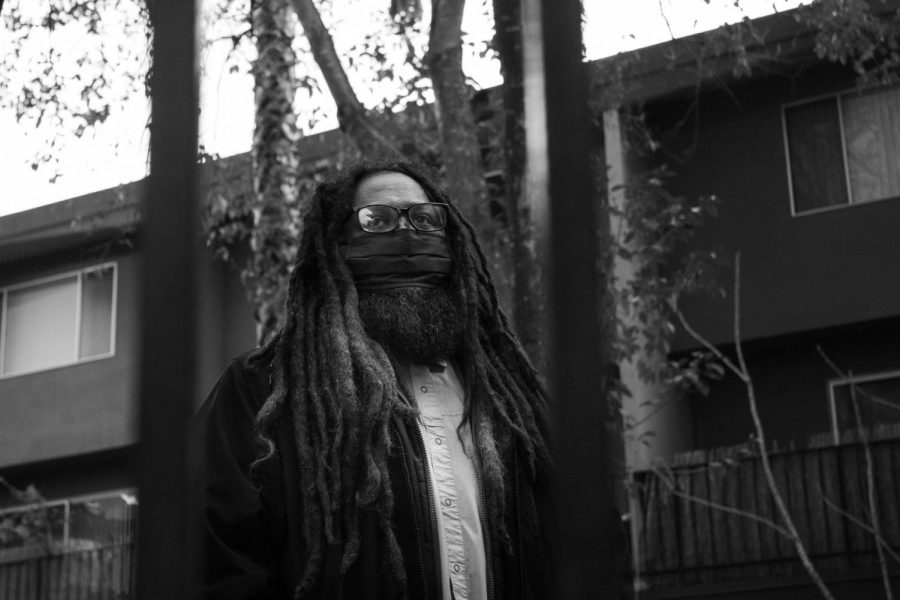 Joseph stands on the opposite side of a gate to the pool area that has been closed since the start of the COVID-19 pandemic on Wednesday, March 10, 2021 in Sacramento, California. Although he is experiencing the most freedom he has had in years, Joseph is still confined to Sacramento County through the ankle monitor on his right foot that only allows him to travel 50 miles from his home. Joseph said that ever since he was released, the population at Mesa Verde has decreased, thanks in part to an order signed by Northern California District Judge Chhabria that caps the detention center’s population at 26 people per dorm.

Ten months into his ICE detainment, Joseph said he and the other detainees began to hear news of COVID-19. Joseph recalled seeing a handwashing video as part of COVID-19 prevention guidelines.

“I’m watching the video, and it just hits me, we can’t do any of those things,” Joseph said, adding that about 100 detainees would share five bars of hand soap on a daily basis.

The ACLU wrote in its 2020 report of detention facilities that it “heard stories of immigrants’ lack of access to proper hygiene and witnessed unsanitary conditions in living units, many of which contained beds, dining, and restroom facilities for up to nearly 100 people all in one room.”

Joseph said he began to call for the release of those detained to preserve the health and safety of the detainees, particularly those with underlying medical conditions. Joseph rallied the support of those detained and wrote a letter urging ICE and Gov. Newsom to release those inside Mesa Verde.

“Our first project with Charles was helping to create a video that we were able to capture with him inside as he was supporting the organizing around COVID-19 [relief],” King said.

She added that Joseph went on to organize a hunger strike when the letter and a subsequent list of demands to the warden went unanswered.

Joseph’s efforts were not unrecognized, however, as he was released with an ankle monitor from Mesa Verde on the third day of the hunger strike April 13, 2020 along with four other detainees. Joseph said that ever since he was released, the population at Mesa Verde has decreased, thanks in part to an order signed by Northern California District Judge Chhabria that caps the detention center’s population at 26 people per dorm.

Now home with his family, Joseph said he still faces the possibility of deportation every day without Gov. Newsom’s pardon, adding that his ankle monitor has yet to be removed. Despite this, Joseph said he focuses on how far he has come and will continue to work for the rights of those incarcerated.

“There can be no exclusion to humane treatment,” Joseph said. “You can’t pick and choose who you treat humanely, that has to be something that’s inclusive and it should be the bare minimum.”