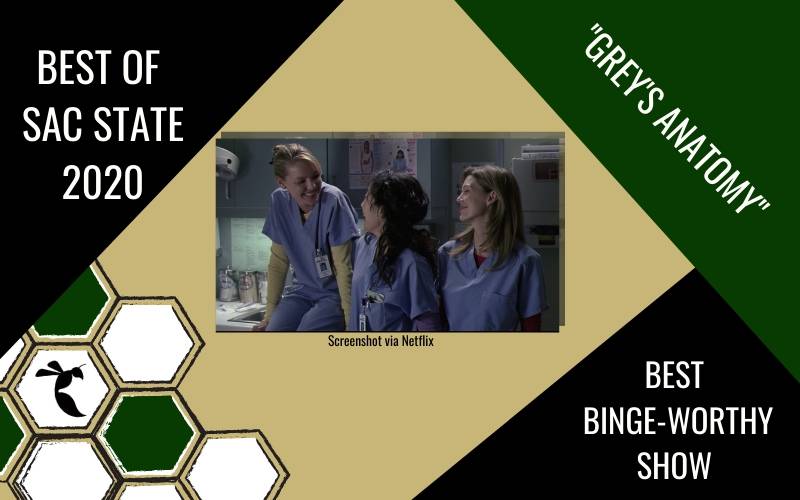 Sac State has taste. Who knew?

I have been waiting to write about this forever. I wanted it to be my last Jawn for The State Hornet but Sacramento State surprised me and actually had some taste.

Sac State students voted “Grey’s Anatomy” as the most binge-worthy TV show. And I couldn’t be prouder. Bravo.

“Grey’s Anatomy” is more than the longest running medical drama to me (but it sure is, can’t wait for season 17).

It’s more than a show about a young woman who spent her entire medical career –– internship, residency, fellowship and now the head of general surgery — at the same hospital.

It’s more than a show that created the longest running gay character on television.

All created and produced by a Black woman from Chicago.

Anyone who knows me knows my appreciation and love for this show. No matter where I am or who I’m with –– on Thursdays at 9 p.m., I need to be home so I can watch Grey’s. Sorry.

I started watching the show as a teenager, and I completely get how girls my age felt watching “Sex and the City” in the late ‘90s. It was taboo and I felt like I was watching something I wasn’t supposed to. From the graphic surgery scenes to the forbidden ghost sex, I was hooked.

The amazing women on this show are what really got me.

These women were gorgeous and were way smarter than their male bosses. But it was so much more than that.

Seeing women successfully navigate the power dynamics of fighting for a literal spot at the surgery table is thrilling.

Seeing women date and hook up with their male bosses and coworkers not to climb the surgical food chain, but because they either were madly in love with them or were embracing the fact that they are sexual beings that deserved to be satisfied — was fascinating to witness.

Over the years, this show taught me the correct way to be loved and accept love. It taught me that the most important part of what I want is me. I shouldn’t sacrifice my dreams and desires for anyone. And when I find love, I’m going to embrace it fully.

People spend too much time guarding themselves because they don’t want to get hurt again. Love openly and love fully because you never know when you’re going to die in a plane crash inches away from the man you wish you would’ve married.

And that’s on Lexie Grey.

Grey’s has 16 and counting seasons. Before you moan and groan that it just needs to end already (shut your mouth), hear me out.

It means the world to me, and it’s all because of the great women this show has created.

First, there’s Meredith. Ellen Pompeo may have some extremely bad takes in real life, but she has made Meredith, the titular character, flawless.

I don’t stan very many white women but I stan Meredith (and her sister, Lexie). She may be the daughter of legendary fictitious surgeon Ellis Grey, but she has made a name for herself. She has proven how important resilience is when you’re a woman trying to succeed in a male -dominated field.

Then there’s god-tier queen herself, Cristina Yang. Yang left Grey’s officially in season 11, but she has made a long-lasting effect on the mega series. I tend to go out of my way to find positive female influences. My own mother has taught me it takes a village to raise strong young women.

You can never have too many women showing you how amazing you can be if you challenge yourself. Yang empowered me in such a special way.

Who can forget how monumental it was when she told Meredith that even though she might love Derek (this is a Derek-didn’t-deserve-Meredith stan account, OK?) that he should never eclipse what she wants in life. “He is not the sun…you are.” *screams*

I know it’s just a TV show, but to me it’s a lifeline. Keep streaming, friends!