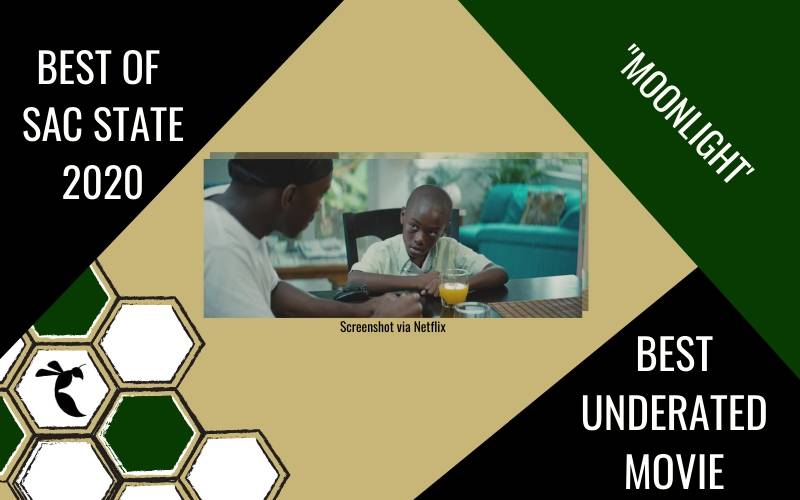 This surprised me. When was “Moonlight” considered underrated?

I feel like a movie that won Best Picture winner cannot be underrated. People are still talking about “Moonlight”, over three years after its release. Even if you may not have seen the film, you’ve probably more than likely heard of it. I love “Moonlight,” and would like to find any excuse to talk about it but I can’t call it underrated.

Now of course, I am not here to be the true judge of what films are actually underrated or not. No one can be. I just want to discuss some films that I feel fit the mold of what an underrated film is and those that I believe deserve to be seen by everyone.

“Josie and the Pussycats”

Would you believe me if I told you one of the most underrated satires ever is an adaptation featuring characters from the “Archie” comics?

“Josie and the Pussycats” does what a lot of adaptations should do, being fully aware of the fact that they are one. The movie was created, so that they could sell more comics and sell a soundtrack. So why not be fully aware that you’re selling a product by satirizing the media industry.

Poking fun at consumerism in the music industry, this film shows us a satirical world where bands are used to help control the minds of consumers. It’s not subtle but it never wants to be.

The best aspect of “Josie and the Pussycats” is that it pokes fun at rampat product placement.

Nearly every scene has some sort of product placement thrown in your face. There are giant Starbucks logos in restrooms and McDonald’s logos on shower doors.

“Josie and the Pussycats” is the anti-capitalist satire you never knew you needed.

“The Edge of Seventeen”

We all love a good coming-of-age film. It’s an easy genre that people can connect to – whether we relate to the characters, or wish we had spent our teenage years like them.

“Lady Bird” and “The Breakfast Club” are thrown around a lot when people discuss their favorites of the genre, but where’s the love for “The Edge of Seventeen?”

Led by Haillee Steinfeld, “The Edge of Seventeen” focuses on Nadine who struggles with many typical issues that would affect any hormonal teenager. Her brother is sleeping with her best friend, she still hasn’t gotten over the death of her father and the relationship with her mother is very rocky.

The film is darkly funny from a much-needed female perspective and benefits from strong writing. It’s sad to see that writer and director Kelly Fremon Craig hasn’t worked on anything since this movie came out.

Nadine is a well-rounded protagonist. She’s relatable. You may not want to admit you share some of her nihilistic and cynical views but deep down you kind of do.

Relatability is the driving force that can make a coming-of-age film work and “The Edge of Seventeen” works so well because Nadine is relatable, regardless of your age.

It’s hard to make a blockbuster look so exciting.

Every now and then we’ll get a film like “Mad Max: Fury Road” or “Spider-Man: Into the Spiderverse” that can change the way we perceive how a blockbuster movie is made. While I love the two movies above and think they are worthy of the discussions they have started, to me, no blockbuster has been as formally innovative as “Speed Racer.”

What the Wachowski Sisters do in “Speed Racer” is something that should be replicated by more blockbuster filmmakers.

“Speed Racer” follows a similar approach to the anime roots of the original television show by having characters fly by the screen as certain pieces of dialogue are discussed. A simple shot-reverse-shot could be used in those scenes but that’s not what the Wachowskis want.

There are moments where the characters are in the foreground but the background has a scene in a different location. It’s a unique way to present the story that you don’t see many other films do. The effect may look a little dated now but it’s the ambition that makes it work so well.

I don’t find excitement out of a bunch of recognizable characters fighting a bunch of random unnamed alien creatures when a film that looks like this exists. More people should be looking at the Wachowskis, not the Russo brothers for true blockbuster filmmaking.

“Speed Racer” is all about how the individual is more powerful than whatever corporate power may be trying to control them, which couldn’t feel more appropriate since this whole film feels like a product of the Wachowskis and not of a studio trying to cash in on a recognizable brand.

Underrated films are some of my favorite things to discover. When you watch a great film you’ve never heard of, it’s like you’ve found some long lost treasure.

And I hope you’ll discover some new favorites after seeing the movies on this list.