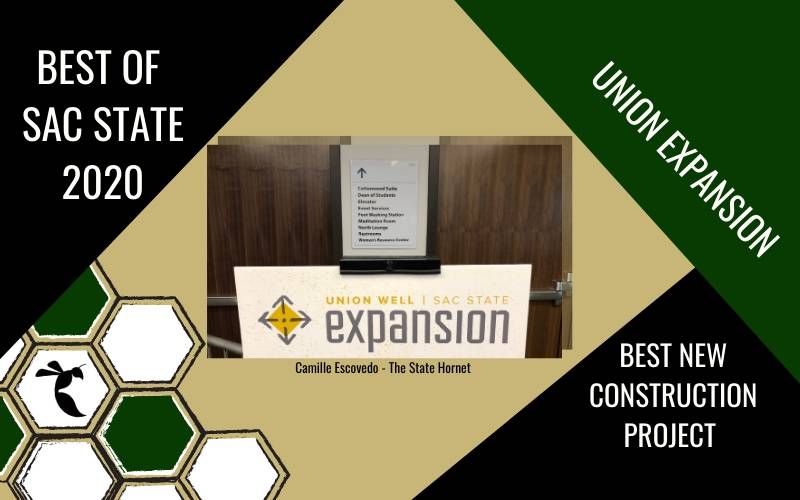 The votes are in and The University Union was voted “Best New Construction Project” in The State Hornet’s fourth annual Best of Sac State poll.

Though the building is temporarily closed due to the COVID-19 pandemic, students shared their favorite parts of the Union and the expansion, and talked about the things they miss most about it.

“I like the welcoming aspect of the University Union,” said Anthony Poindexter, a criminal justice major at Sac State. “School in general can be really stressful and can sometimes break students emotionally, but the dynamic at the University Union is one where students can feel at home and welcome.”

Poindexter said his favorite place to hang out and eat in the Union is Round Table Pizza. He said he feels Round Table is one of the best pizza chains and he likes the fact that they sell beer on campus.

“I was able to watch sports on TV and study if I wanted to,” Poindexter said. “Everybody enjoyed themselves but it never got out of hand to the point it was a distraction.”

Coleman Thomason, a business administration major, said he enjoys the eateries and the study environment at the Union.

“My favorite spot to study and hangout at is the second floor, right up the stairs,” Thomason said. “This area always seemed to have the most seating because there were so many spots.”

Thomason said that he was also a fan of the decor, ambiance and design of the Union and that he likes the Starbucks addition, which opened last year. He also said that the Union has a welcoming vibe.

Bill Olmsted, executive director of The University Union and The WELL at Sac State, said via email that the original Union building was built on campus in 1975 and has continued to serve students for 45 years.

Olmsted said during that time span, many students were involved in the expansion and renovation of the building.

“We began planning the project back in 2013 and a contractor/architect team was selected in 2015,” Olmsted said. “Demolition day took place in March 2017 and from that point the project took a little over two years, opening to the students on April 2, 2019.”

Olmsted said that the design and ambiance of the building was a collaboration between staff, students, architects and the professional designers that were hired on to help with the project.

“The project involved a multitude of participants, from all Union WELL Inc. staff, campus partners, and many, many students,” Olmsted said . “We engaged students at every point in the planning and design phases, making sure we were capturing what they wanted to see in THEIR Union.”

Chris Winters, a history major, said he likes that the Union has good restaurants, a lot of seating and good Wi-Fi. He said he misses the fast internet and being able to use the Terminal Lounge now that the Union is temporarily closed.

Winters said his favorite eatery in the Union is Good Eats, which he said is the least expensive option and provides great sandwiches. The one thing that he is hoping for is more cheap options for eateries at the Union.

Olmsted said that not knowing when students would return to campus has made it difficult to predict what ideas or changes could surface in the future development of the Union.

He said there are no new planned food service options or additional spaces in the building once the campus returns to normal operation, but that building staff are always looking for ways to serve the student body.

“We are always looking at how we can continue to best serve the needs of the students and the campus community,” Olmsted said.