Supporters cheer on for Mayor Pete Buttigieg during his Town Hall at the Cesar Chavez Plaza in Downtown Sacramento on Friday, Feb. 14. (Rahul Lal )

Supporters cheer on for Mayor Pete Buttigieg during his Town Hall at the Cesar Chavez Plaza in Downtown Sacramento on Friday, Feb. 14.

Before he arrived at the platform, Lt. Gov. Eleni Kounalakis started the event.

“(Buttigieg) is ready to be the President of the United States,” Kounalakis said. “He is going to be able to lead us into the future with his savviness and understanding of where this world is taking us with technology.”

Lt. Gov. Kounalakis said Buttigieg, “is the better end of our armed forces” and that “he understands,” regarding his experience in serving his country as a Navy intelligence officer.

“Pete Buttigieg is part of a generation that understands technology,” said @EleniForCA at the @PeteButtigieg town hall in Sacramento,CA. @TheStateHornet pic.twitter.com/Mqcr8qJXMR

On stage, the former mayor explained the goals of his campaign but also thanked those who have supported him since Indiana.

“If you are a supporter of this campaign, I thank you and I need you to spread the word today to anyone who will listen,” Buttigieg said. “This is our only chance to defeat Donald Trump.”

Ariel Bronstein, a Sacramento State history major said she attended the event to learn more about what Buttigieg’s campaign is all about.

“I wanted to learn more about his ideas and how he’s going to include students in his campaign,” Bronstein said. “And I want to see how diverse his people are.” 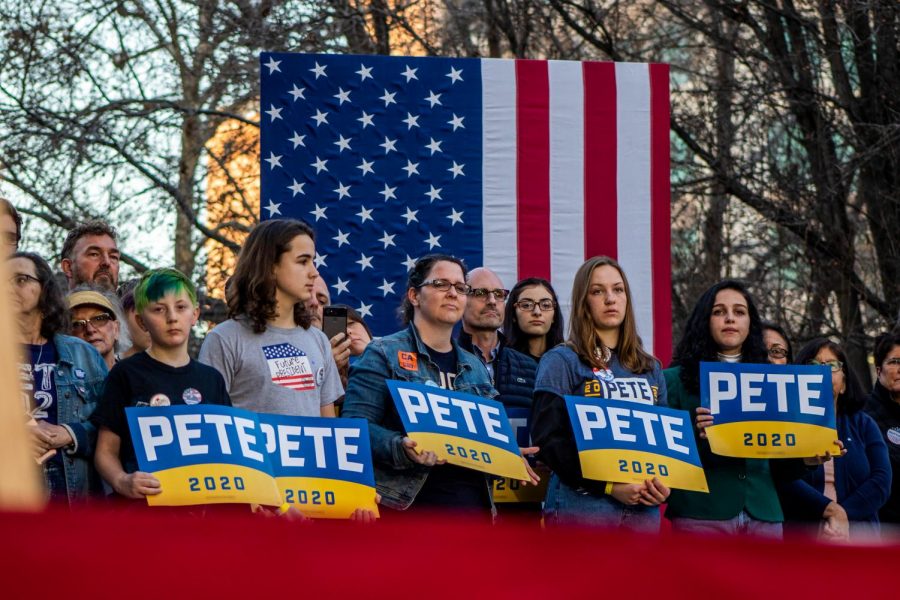 Buttigieg brought the Mayor of West Sacramento Christopher Cabaldon — who he described as a friend of his — on stage to field online questions and some from the crowd.

The first question came from Buttigieg’s husband Chasten Buttigieg, regarding their first encounter.

“I swiped right,” Buttigieg said, describing it as the most millennial thing he did in meeting his husband online.

“He will make the best First Gentleman of the United States,” Buttigieg said.

Regarding K-12 education, with his husband who is a teacher in mind, Buttigieg said he believes standardized tests should not be a requirement in shaping young minds.

Buttigieg addressed systemic racism in the United States and proposed the establishment of a Frederick Douglass Day to officially celebrate his birthday every February 14. This is a very significant day in Black history, celebrating Douglass’ escape from slavery in 1838. He became a leading abolitionist during his time.

When posed the question of, “What are you planning to get to win the African American vote in the Democratic primary?” Buttigieg said it’s about respecting and deserving it because the United States is not “monolithic.”

Buttigieg emphasized the importance of having Black entrepreneurs, and how investing in their businesses will advance the current economy. Buttigieg said it is important to stabilize the safety of “marginalized” communities.

He also said he plans to add 25% towards taxpayer dollars in businesses and contractors.

Buttigieg said Black women are three times as likely to die of complications from childbirth which could have been avoided if the U.S had more accessible healthcare.

“Yes, because of racial biases in a clinical environment but also, because of things that affect your health before you ever cross the threshold of a doctors office,” Buttigieg said. “Like the fact that Black families are more likely to be red-lined.”

Buttigieg said he would not allow for control in domestic politics to ensure the protection of the U.S from foreign ties.

“We will stand up to make sure that China does not undertake aggressive or anti-democratic action,” Buttigieg said. “This isn’t about the U.S. interfering in the affairs of other countries, this is about the U.S being a part of an international community seeking to promote stability, human rights, and democracy.”