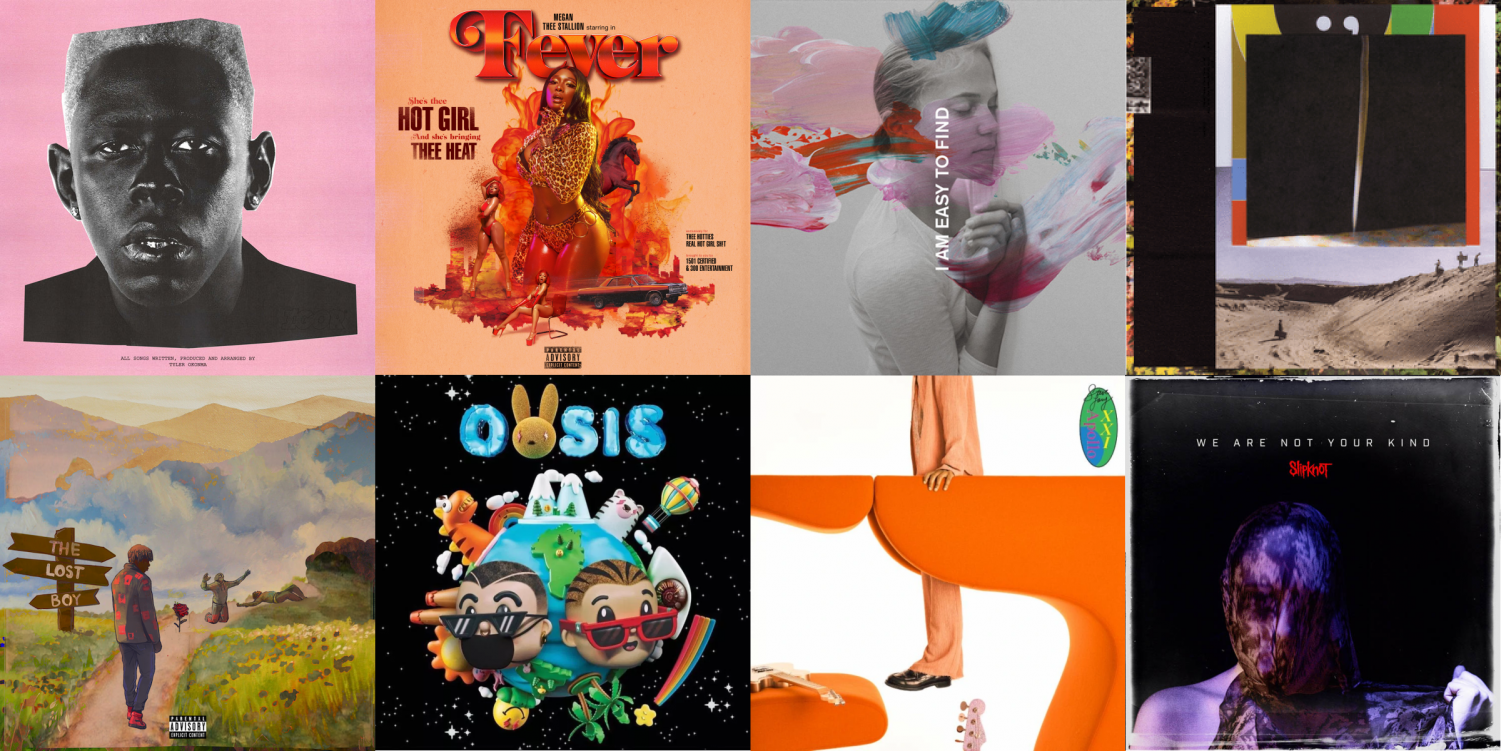 This summer was long.

And yet, as the first week of the fall semester at Sacramento State comes to a close, it feels like the hottest season of the year went by in the blink of an eye.

Whether you’re looking to mourn the passing of summer or you’re just looking to discover some new music, some of The State Hornet’s editors put together a list (and Spotify playlist, for your easy listening pleasure) of their favorite music projects of the summer.

Robbie  — “IGOR” by Tyler the Creator

The fifth studio album by Tyler, the Creator, “IGOR,” technically released last spring but is a true summer classic nonetheless.

Including a varied and star-studded roster of guest appearances and backing vocals such as Lil Uzi Vert, Solange, Kanye West and La Roux, the heavily thematic album tells the story of the title character’s love triangle involving their boyfriend still dating their ex behind Igor’s back.

The album features a very experimental and atmospheric electronic noise sound underneath its vocals, with R&B and funk-inspired, nostalgic-sounding riffs and solos on songs like “I THINK” and “A BOY IS A GUN*.” The story elements of the album are masterfully integrated, with Tyler shifting personas and vocal styles, going from tearful ballads to angry rants sometimes on the same track, and occasionally even stopping to loudly catch his breath, worn out from his own emotional intensity. Fans of narrative concept albums should be sure to give this one a listen.

Megan Thee Stallion’s much anticipated follow up to her previous mixtape “Tina Snow,” “Fever” delivers sex positivity and female empowerment. Megan flows effortlessly like an MC veteran over high powered Southern beats and classic Houston originated colloquiums. She took over the season when she coined the term “Hot Girl Summer.” The movement inspired women to live life carefree and confidently while being unapologetically themselves.

Megan is a 24-year-old college student who writes raps in between classes and tours the country during the summer. Megan landed a guest spot on Dj HollyHood’s radio show where she freestyles over Biggie Smalls’ “Big Poppa” instrumental. Megan was named a 2019 XXL Freshmen alongside promising upcoming rappers Tierra Whack and Rico Nasty.

While she outraps many of her male counterparts, Megan’s ability to freestyle lands her in a small percentile of current and past rappers. While already earning the respect of her seasoned predecessors like Nicki Minaj, Trina and Missy Elliott, Megan is set to earn her spot in someone’s top 50 greatest list.

In the spirit of a hot girl summer, take a shot of D’ussé and leave a boy on read.

YBN Cordae’s debut album “The Lost Boy” features artists such as Chance The Rapper, Anderson Paak, Pusha T and Meek Mill. Along with these features, rapper J Cole produced the track “RNP,” which is a rarity in the hip-hop community.

Cordae received a co-sign from Dr. Dre, one of rap’s most notable artists, and was named a 2019 XXL Freshmen. His debut album was anticipated by many rap fans like myself.

Throughout his album, Cordae’s storytelling ability is prominent and flows perfectly over the production of the album. As an emerging artist, Cordae is off to a great start with “Lost Boy” and if you have not listened to it yet, it is a must for any rap fan.

Though released right at the start of summer, Steve Lacy’s debut solo album proved to be the perfect breezy soundtrack for the hottest months of the year.

“Apollo XXI” is indie, R&B, rap, lo-fi pop, funk, or any combination of the above. But the 21-year-old’s first full-length solo studio release rises above arbitrary classification. It doesn’t suffer from over-ambition at any point — it’s a stylishly executed and dreamy blend of genres, a peek into Lacy’s interior self.

Guitar and bass dominate the album, with retro synths smoothing out the sometimes rougher edges (see “Playground” and “Basement Jack”) and delivering the perfect sound for sun-drenched, introspective, summer relaxation.

Lacy gained fame/recognition as a member of The Internet and has collaborated with the likes of Kendrick Lamar, Vampire Weekend, Solange and Mac Miller. What “Apollo XXI” shows is that Lacy can (and perhaps, should) shine all on his own.

Jannah — “I Am Easy to Find” by The National

The National returns with their eighth studio album of indie rock goodness, delivering a vibrant 16 track project that’s full of surprises for both first-time listeners and die-hard fans.

While not the most uplifting of albums to start off a summer break, “I Am Easy to Find” surprises with tracks perfect for all your summer activities. The upbeat tempo of “Rylan” and the long, winding highways of a road trip are a match made in heaven, while “Roman Holiday” features mellow chords and a soft sound making for the ideal background music of anyone lying around doing nothing, waiting for Sacramento’s scorching heat to subside. Other honorable mentions include the quick-tempered tracks “You Had Your Soul With You” and “Where Is Her Head” as well as the calmer, more distinguished vibes of “Hey Rosey” and “Quiet Light.”

If you’re looking for a deeper look into the album, check out the 24-minute short film of the same name that accompanies the album, directed by Mike Mills, starring Alicia Vikander and fully available on YouTube.

Summer 2019 had music that reflected the changing of the music scene. This is exactly what “OASIS,” the album collab of Bad Bunny & J Balvin, showed.

Local Sacramento radio station Hot 103.5 reintroduced itself as “Fuego 103.5” this summer with a surgance of Spanish music reflecting on the audience demand for the genre. Bad Bunny and J Balvin continue to prove that their music must be heard at every barbeque and party this summer.

“OASIS” cemented itself as the summer album for listeners as the artists continue to build their legacies as possible fits for the Mount Rushmore of Latin trap.

American indie-folk band Bon Iver continues to impress with its expressive music. Founding member Justin Vernon is the songwriter for each song on each album. The band’s fourth album “i,i” was released on Aug. 9 and is a sequel to their 2016 album 22, “A Million.” Like Bon Iver’s previous music, “i,i” is comprised of songs that have an in-depth meaning.

Bon Iver’s music has a unique sound which is vividly heard in the new album’s song “Jelmore.” Some of this music can be mistaken for instrumental by the way Vernon’s voice is heard. Vernon has a singular way of conveying his self-reflections and life experiences though several of his songs, specifically in “RABi.”

Several of Bon Iver’s songs have a smooth and calming sound. “Perth,” “Calgary” and “Wash” are songs on the 2011 “Bon Iver” album that can be listened to while studying or going to sleep. While the sound of the music is relaxing, the content contains lyrics that urge to be deciphered in order for listeners to relate on a deeper level.

Bon Iver will be in San Francisco on Sept. 12 for its autumn tour.

Jordan — “The Adults Are Talking” by The Strokes

Alright, to be honest, I don’t think I’ve listened to a full album that came out this summer. But, let me tell you when I found out The Strokes had performed a new song during a May 13 show in Los Angeles, I might have… cried.

The Strokes haven’t put anything out since “Future Present Past,” an EP that was released in 2016 and I’ve been waiting patiently for something new since then.

I love The Strokes.

And this song, though it has yet to be officially released, is so fun (even with poor audio quality). It feels like classic The Strokes, new but continuing the vibes of past albums. I’m not a music critic for a reason and I apologize for the use of the cliche word vibes and I’m stoked for whatever they release next.

Cory — “We Are Not Your Kind” by Slipknot

The sixth studio album of American heavy metal band Slipknot, “We Are Not Your Kind” is a welcome return of the band, following 2014’s .5 “The Gray Chapter.”

The album’s first single, “Unsainted,” is a standout hit on the band’s new album. The song opens with choir vocals and a synthesizer right from a horror-movie trailer. This is followed by frontman Corey Taylor opening with the lyrics, “I’ll never kill myself to save my soul,” backed by drums and guitar.

The song then kicks into full gear with repeated hammer strikes, heavier guitar riffs and Taylor taking on his guttural tone with the lyrics, “I’m finally holding on to letting go.” “Unsainted” exemplifies Slipknot’s ability to deliver heavy instrumental and vocal style while also holding onto clear and melodic lyrics that are lost with some heavy metal songs.

On top of the song’s heavy rhythm,  the music video for “Unsainted,” released in May, only adds to the experience with cultish imagery and the debut of the latest versions of Slipknot’s creepy, yet iconic, masks.

While the second album since the death of bassist Paul Gray and the departure of drummer Joey Jordison, the firing of percussionist Chris Fehn earlier this year led to questions about the band’s future. However, the heavy melodies of “We Are Not Your Kind” show that Slipknot still has what fans want.