‘An attack on us is an attack on everybody’: Facing antisemitism in Sacramento 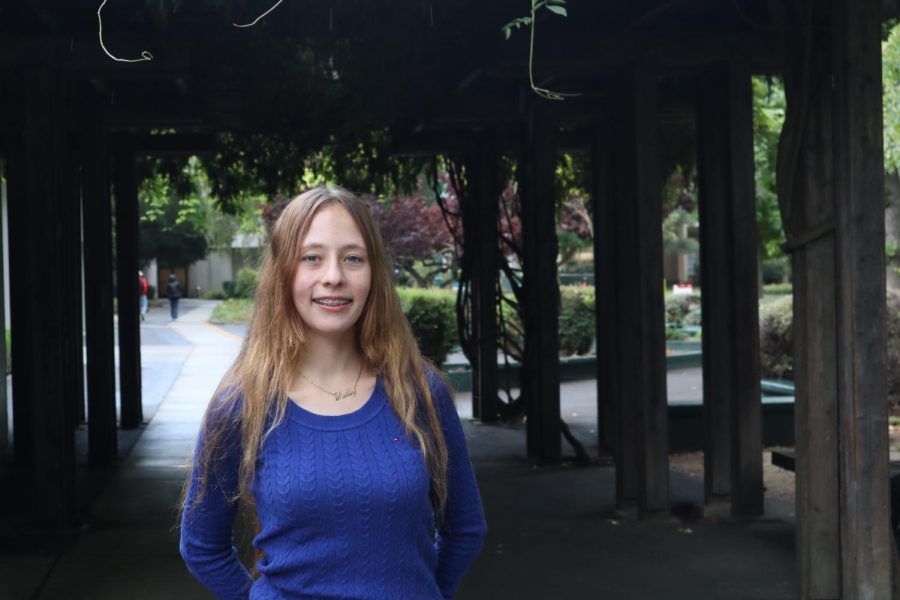 Second-year business major Shelly Zalezniak stands in front of the Riverfront Center on Monday, Sept. 19, 2022. Zalezniak said students outside of her club reached out to her after the swastikas were found, showing support for the Jewish community on campus.

Correction on Saturday, Sept. 24, 2022. – This story have been updated with the following corrections:

1) A  previous version of this article stated that the swastika found near Mendocino Hall on Sept. 2 was the second hate symbol that was found. We have since corrected the article to display it as the first.

2) The first swastika was found on the back of a pillar (on a wall) in a classroom inside of Mendocino Hall.

With multiple swastikas reported on Sacramento State’s campus and in the greater Sacramento area, the Jewish community at the university and in the city are speaking out.

In early September, Sac State President Robert Nelsen and Sacramento Mayor Darrell Steinberg addressed the swastikas found on Sept. 2 in Mendocino Hall and on J Street. No individuals have been held accountable for either swastika.

“University police are investigating these incidents,” Nelsen wrote in a campus-wide email. “Perpetrators of such crimes will always be held accountable.”

Second-year business major Shelly Zalezniak is the president and founder of the Israeli-Jewish Association at Sac State. When she heard about the swastikas on campus, Zalezniak said she felt uncomfortable and had a sense of fear.

UC Davis, American River College and Cherry Island Golf Course have seen similar hate crimes. At ARC, swastikas were found in the bathroom of the science building, while at Cherry Island, swastikas and anti-semitic slurs were carved into the golf course ground.

It is uncertain whether or not these incidents are related.

Bruce Pomer, the president of the Jewish Federation of the Sacramento region, said that hate crimes in general impact more than the Jewish community. This should raise concerns for other religions and races too, he said.

Pomer said the Jewish community in Sacramento is now more concerned with direct security and frequently gets involved with law enforcement at the city, local and federal level.

He added that, when hate speech on the internet or hate crimes increase, it causes him to be more cautious of the safety of his Jewish community.

“Whenever you have this kind of hate speech, there is a seed or a kernel that can grow into violence and direct dangerous activity,” he said. “For us, we’re looking over our shoulder.”

Back at Sac State, Zalezniak said students outside of her club reached out to her after the swastikas were found, showing support for the Jewish community on campus.

“It made me feel so much more comfortable and better knowing that there are people out there who do care and are aware of what is happening,”  Zalezniak said.

These incidents are not the first accounts of prejudice at Sac State. Racism and hate crimes have plagued Sac State for years, including (but not limited to): racial slurs directed at Black students during a UNIQUE talent show in 2020, instances of systematic racism within the theater and dance department, and the mass departure of Black faculty and administrators.

When asked about the university’s response to the swastikas, Sac State Director of News and Communications Brian Blomster said the university has no tolerance for hate crimes.

“We are firmly and unalterably against all forms of hate symbols, hate speech on our campus, in our region [and] in the nation,” Blomster said. “The president’s position is that we will consistently and proactively stand up against such things.”

According to a campus-wide email, Sac State will be conducting quarterly walk-throughs on campus to “observe the environment and to ensure that [campus] property is not defaced with hate symbols and messages.”

Sac State also provides an Acts of Bias Reporting Tool to report any symbols, images or language of hate.

Both Pomer and Zalezniak said how, despite facing these hate crimes, Jewish communities in Sacramento have been brought together.
“As a community we can grow together from this, to learn how we can prevent it,” Zalezniak said. “Not everything can be preventable, but as a community, we are better together and we’re stronger together. ”