Hornets look to put last year’s 34-16 loss in the past this week. 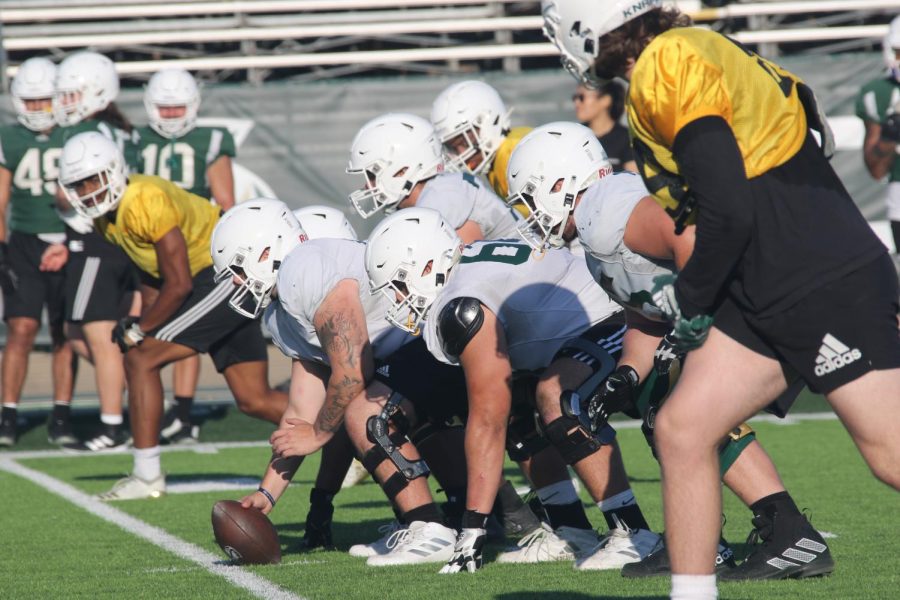 The Sacramento State Hornets offensive line prepares for the snap in practice Wednesday Sept. 14, 2022 at the Hornet practice field. The Hornets allowed just one sack in their 56-33 Week 1 victory over Utah Tech.

Sacramento State kicks off their three-game road trip in Cedar Falls, Iowa this week against the Northern Iowa Panthers. The Panthers traveled to Sacramento last season and beat the Hornets 34-16.

“It was really tough coming off the COVID year,” Sac State senior cornerback Marte Mapu said. “Kudos to them, but they just came out and played better than us. This year we just have to keep our feet under us early, and keep going from there.”

Sac State head coach Troy Taylor recalled the game and feelings in the locker room after the defeat.

“Everybody who was here remembered that they got after us,” Taylor said. “I think it’s about execution and being prepared. They’ll be ready and so we have to match that.”

At the time, Northern Iowa was ranked #15 in the country; however, this year has been a total reverse.

According to TheAnalyst.com, Northern Iowa was ranked #21 to start the season, dropped to #24 after a 48-17 loss to Air Force, then dropped out of the top 25 after their last week loss.

The Panthers dropped their last game against their first FCS opponent, North Dakota 27-29, moving the Panthers to 0-2. Northern Iowa gained most of their yards by the passing game, with their redshirt junior quarterback Theo Day.

THINGS TO WATCH FOR:

A 3rd quarter to forget best describes last year’s matchup for Sac State. The Hornets turned the ball over six times last year, giving up 21 points in the 3rd quarter. If the Hornets want any fighting chance in this game, that cannot happen again.

“I thought we had 14 turnovers,” Taylor joked. ”When I heard it was six I was surprised.”

It’s worth noting that in that game senior quarterback Asher O’Hara threw the ball 53 times, which was an outlier last year. After this game, the Hornets turned a corner leaning more into running the ball.

“[Sac State] isn’t gonna worry about [Northern Iowa] like we did last year,” O’Hara said. “We are gonna win this game if we just focus on ourselves and not on them.”

Sac State’s secondary will need to step up this game to give the Hornets a chance. The Hornets’ secondary forced three interceptions last week, but Utah Tech still tallied 506 passing yards on the day. If the Panthers continue last week’s trend, this game will be won and lost in the air.

“[Day]’s really good, has a strong arm and a fleet of receivers around him.” Taylor said. “We’re facing a team who can really throw it and they’ve been able to run it in the past.”

One of the most exciting matchups to watch will be Mapu against Panther’s senior receiver Deion McShane. McShane went over 100 receiving yards in both of Northern Iowa’s games so far this season. If the Hornets want to bottle up the passing game it starts with McShane.

In the last game, Sac State ran a lot of blitzes to try and exploit Utah Tech, but the man coverage of the Hornets did not hold up last week. The Panthers surely will look to exploit this.

“We’re focusing in, tightening up coverages, our technique,” Mapu said. “We wreaked a lot of havoc last week, but we also gave up a lot of big plays. We are focusing on ourselves and getting our fundamentals down.”

The Panthers defense will mainly be focused on containing the Hornet’s rushing attack centered around O’Hara and sophomore running back Cameron Skattebo. Expect the read and speed option to be a huge part of the offense.

In Northern Iowa’s first game, they took on the Air Force Falcons, a mainly option focused offense. The Falcons ran for 582 yards on the Panthers defense; expect the Hornets to try and exploit that weakness.

“I don’t think you can put too much into that game,” Taylor said. “Air Force is so unique with their triple option. I think what we saw against North Dakota is closer to what [Northern Iowa] is.”

The Panthers did give up 137 rushing yards to North Dakota last week, but that was on 40 rushing attempts. Their run defense is good, but the Hornets will still go at it.

These two teams should be polar opposites on offense. That doesn’t mean Sac State won’t throw, this game should feature more of senior quarterback Jake Dunniway. As North Dakota found success beating the Panther’s through the air.

Sac State really struggled on the road and this is the first Northern Iowa home game. The crowd should be roaring and Sac State might struggle coming off their bye.

KEYS TO THE GAME:

Sac State: Run, run, run as fast as you can. That will be the mantra for the Hornets this week. If the Hornets can effectively utilize the option with O’Hara and Skattebo they should win this game. Marte Mapu will be huge in this game shutting down Day and his receivers.

Northern Iowa: Look for the Panthers to try and take the top off the Hornet defense. The Hornets struggled on deep passes against Utah Tech, with the majority of the Trailblazers’ passing yards coming on deep shots. If the offensive line holds up and gives Day time to look downfield, the balance will be tilted into the Panthers’ favor.

Jack Freeman, Football Beat Writer: This game will be a close battle which both teams will want to win. Northern Iowa wants their first win and Sac State needs this to maintain their high ranking. There is just no way that the Hornets turn the ball over as much as they did last year. I see the Sac State secondary winning the day and the Hornets rushing attack will be too much for the Panthers.

Jordan Latimore, Sports Editor: Despite the Hornets opening the season with authority at home last week, I don’t know if they can duplicate the same dominance against a really disciplined Panther team. I do, however — like last week — expect a big performance from Cameron Skattebo to keep things in this matchup interesting.

Dylan McNeill, Sports Editor: Last year, the Panthers gave the Hornets their first loss of the year in their home opener. I see a similar outcome in 2022, after dropping their first two games UNI will be desperate to grab their first win of the season. The Panthers defense picked off senior quarterback Asher O’Hara three times. If Sac State wants to win they’ll have to take better care of the ball.