Opinion: What to expect from ‘Moon Knight’ finale

Marvel teases a third personality for the show 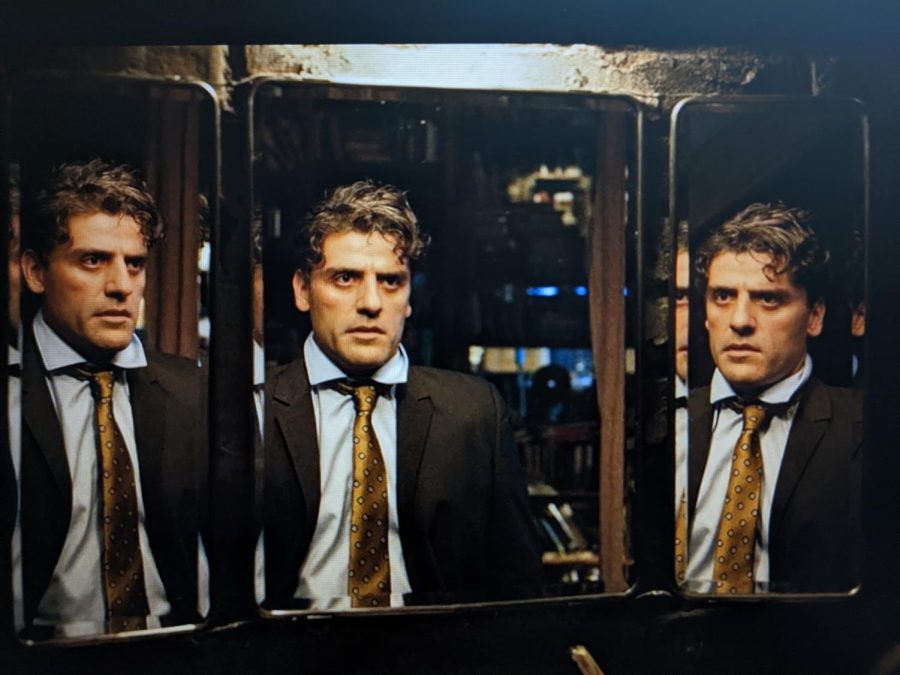 Steven Grant stares into his own reflection in a three part mirror which, in the series, allows conversations to happen between personalities. It’s possible that this shot of three reflections represents the three personalities: Marc Spector, Steven Grant and Jake Lockley. (Photo courtesy of Disney)

The way that Disney toys with its viewers, with baskets full of Easter eggs referencing both Marvel movies and comic books in every episode of a new show really gives the production company a window to gauge what the people want.

These ‘Easter eggs’ are mostly there to maintain continuity with the bigger Marvel cinematic universe with references to the comics they are based on to provide context.

The way they brought all of the live action Spider-Man actors together for “Spider-Man: No Way Home” was something that fans have been asking for for a very long time.

It’s an example of the way that Disney production decisions are a two way channel of producing content with all of these Easter eggs, see which ones fans latch onto the most, and provide proper feedback to the company to manufacture as if it was their plan all along.

Steven Grant, played by actor Oscar Isaac Hernandez Estrada, discovers the hidden cell phone of Marc Spector, later revealed to be one of his own alternate personalities.

Steven turns on the phone and sees dozens of missed calls from a “Layla”, a character revealed later on to be Marc’s wife played by Egyptian and Palestinian actor May Calamawy, but that isn’t the only name that appears on the phone. Steven also scrolled past one other name: Duchamp.

Marc Spector is a mercenary in the show as well as the original comic books. In the comics , Marc has a friend named Jean-Paul Duchamp who also works as a mercenary.

Duchamp, nicknamed ‘Frenchie’ is one of Moon Knight’s only external allies in his comic book series. The implication of Duchamp existing in the Disney Plus series is an example of that comic book context that is so popular in the MCU.
Jake Lockley
The final episode of “Moon Knight” premieres on May 4, which gives viewers a single episode for all of the plotlines to weave themselves back into a singular conclusion.

In the Marvel comic book, Marc is the main personality and is committed to serving Khonshu to become Moon Knight.

In the comics, Steven Grant is a millionaire who serves as a source of income for Marc’s endeavors as Moon Knight by paying for trips and archeological expeditions or sometimes to serve the Avengers when their goals align.

But there is one more original personality from the comic universe that the Disney Plus show has yet to introduce – Jake Lockley, a New York cab driver who investigates crime at the street level.

The personality of Jake Lockley is what gives Moon Knight the detective skills he needs to discover the root of the evil he fights, and the show seems to imply his existence at several points.

The first time the existence of a third personality is implied is when Steven speaks with the tour guide for the museum, Dylan. He discovers that he has supposedly invited her on a dinner date, though he has no recollection of doing so.

Marc could be the personality responsible for this mixup, but his arc throughout the series is to protect Layla, do Khonshu’s bidding and keep his and Steven’s lives separate. Meddling in Steven’s life by setting him up for a dinner date conflicts with those motives.

Jake, if he does exist, has yet unrevealed motives. Maybe he sees Steven’s struggles and thinks a dinner date would be good for him; protecting Steven the way that Steven protects Marc.

The next piece of evidence is much more concrete. In one scene, Marc is attacking followers of the antagonist, Arthur Harrow, in order to get information from him about the location of the dig site that marks the supposed grave of the Egyptian god Ammit.

After the two fight for control of the body, Marc wakes up to control the body as he holds a knife buried in the gut of one of the men he was pursuing next to a cliff. Marc knows he didn’t bring them to this cliff, and deduces that it must have been Steven who had stabbed this man.

“What the hell’s wrong with you Steven?” Marc says.

“Me?” Steven responds. “You’re the one going on a killing spree.”

“I didn’t do any of this,” Marc says, insinuating that neither Steven nor Marc killed the man using the knife, which means someone else had to have had control.

The final piece of evidence is in episode four. In this episode, Marc has been shot and discovers himself in what appears to be a psychiatric hospital, where he later finds Steven trapped in a sarcophagus.

This entire area is revealed later to be their mind’s way of processing the afterlife and contains Marc’s alternate personality Steven along with the memories of both Steven and Marc. This unopened sarcophagus is probably not a memory at all, but instead may have Jake Lockley trapped inside.

I waited throughout episode five for them to go back and discover Jake Lockley. Marc and Steven were trapped in the afterlife while they waited for their scales to balance to be permitted into the field of reeds, but they just wouldn’t because the boat guide said that their hearts “weren’t full.”

It was my initial understanding that these hearts would be full if they found Jake and added his heart to the scale. When Marc and Steven bonded at the end of the episode and the scales balanced, my own heart sank for Jake Lockley.

Is Disney really going to insinuate Jake’s existence with the killing in episode three and the sarcophagus in episode four and not give him to us in the end? It would be very “WandaVision” of them to do that all over again.

We only have a few days to wait and find out. Until then, we can only hope that fans love our favorite New York cabbie enough for Disney to write him in officially.