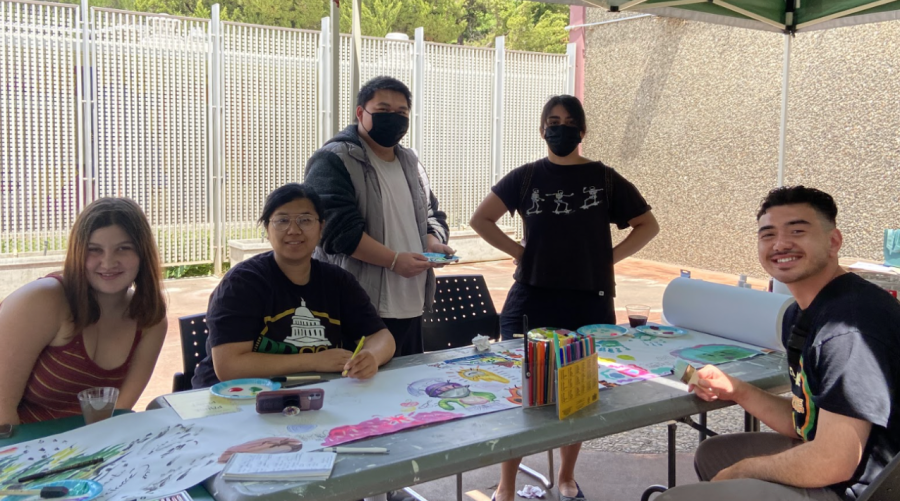 Students take a break in between classes to paint on a long roll of paper in the Kadema Hall Courtyard on Wednesday, April 27, 2022. Professors would stop by and draw as well or just look at the drawings the students had made.

The Sacramento State Arts & Letters Ambassadors held their first Pause & Paint event Wednesday. The event invited students to pause from their busy schedule and paint together in the Kadema Hall Courtyard.

Ambassadors representing the College of Arts & Letters have planned many events throughout the semester. They try to help students adapt to life at the university as more and more students start to return to campus, according to senior communications major and Arts and Letters Ambassador Mesha Young.

The event attracted art enthusiasts, as well as those who just wanted to take a break and show off their creative side.

Public relations senior Salynne Colobong said she decided to come because her friend is an A&L Ambassador, and walked over to Pause & Paint to pass some time before her next class started.

“I’m not an artist right now, but it’s not as stressful as it could be,” Colobong said while drawing Herky the Hornet wearing a graduation cap.

A Thao, junior studio arts and digital media major, said he came to Pause & Paint because he heard about it through a professor and decided to go with a friend from class.

Thao had decided to attend the event because he had finished his project early for one of his classes so he decided to skip it for the day. Thao’s professor had briefly stopped by during the event to look at the drawings.

“I usually hear about events like this through emails,” said Thao. “I knew about this [event] but wasn’t sure it was today.”

Thao joined his friend Giselle Villela, a junior studio art major, at the event. She said she received an email about the event and decided that they could attend since they had both finished their projects early.

Others discovered the event by chance and used it as an opportunity to spend more time on campus.

Jude Doyle, a senior public relations major, said he came because he felt he wanted to do something besides just coming to class.

“I commute here from Tracy,” Doyle said. “When I come out here, I have to make do with the time I have here.”

Kayla Safdari, a first year child development major, said she didn’t receive an email about the event but instead saw the signs leading towards the courtyard where the painting was happening.