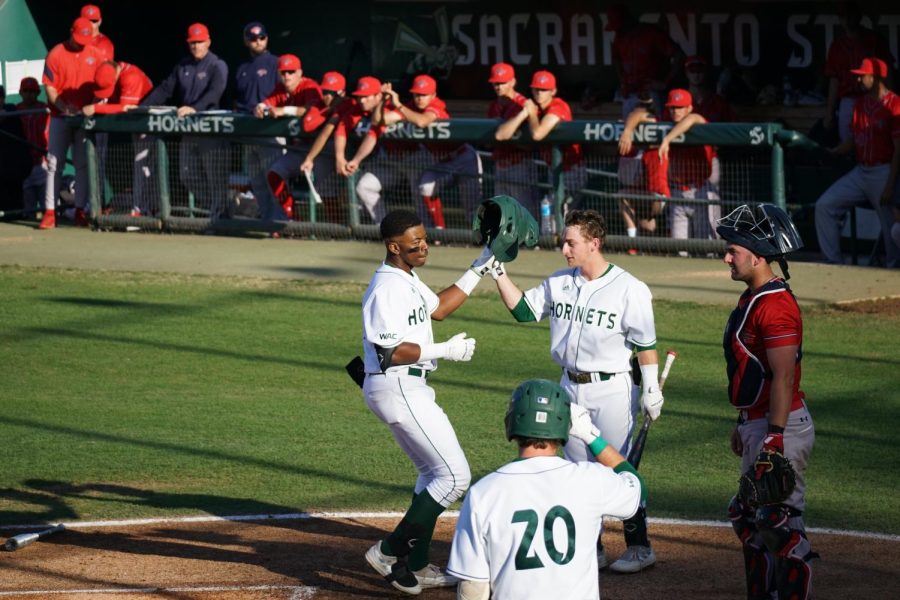 Sac State baseball won their first conference series of the year when the Hornets took two of three from Utah Valley University this weekend in Orem, Utah.

The Hornets improved to 5-7 in Western Athletic Conference play after the series win. Utah Valley now sits in last place in the WAC at 3-9 with their overall score of 9-19. This weekend’s series victory was the first for Sac State since their sweep of Long Beach State in February.
Friday: Sac State pulls out 7-5 win, Eli Saul continues to impress
Sac State picked up a series-opening win behind the right arm of Eli Saul just as they have in every other WAC series so far this season. Saul’s record moved to 3-0 in 2022 with a 2.79 earned run average as the Hornets moved to 7-0.

Senior infielder Nick Iwasa led off the series with a home run to get the Hornets the early lead. Sac State added three more runs in the third inning and two more in the fourth to open up a 6-2 lead.

Nick Iwasa homered to lead-off the game and drove in a pair to continue the Hornets unbeaten run in series openers this year at 7-0. pic.twitter.com/Nj3m5ANA8A

Things got a little interesting in the eighth for the Wolverines thanks to a home run by sophomore infielder Kyle Coburn to make it a 7-5 Hornet lead.

Sac State manager Reggie Christiansen turned to senior reliever Jack Zalasky to get the last four outs of the game for Sac State. Zalasky tallied two strikeouts as he closed the game to pick up his second save of the year.

Sac State has now won all seven of their series openers thus far in 2022.
Saturday: Hornets can’t hold early lead, lose 10-4
The Hornets found themselves up 2-0 after two innings against Utah Valley after a run-scoring sacrifice fly by sophomore Cesar Valero and a home run by sophomore Jorge Bojorqez.

From there the Wolverines scored 10 unanswered runs to spoil Sac State’s Saturday.  Hornet freshman Jeffrey Heard launched a two-run home run in garbage time for his fourth round-tripper of the year but the Hornets ultimately fell 10-4.

Hornets starting pitcher freshman Noah Lucchesi has shown signs of struggle as of late after a strong start to the year. Saturday’s loss brings his record to 0-4, while sporting a 5.76 earned run average as Sac State has now lost in five straight of Lucchesi’s appearances.

“As a team, we’re struggling, we came together, battled, found a way to take a step in the right direction, we’re looking to keep that going,” Bojorquez said. “I’m just going to do my best to help my team win.”

Cesar Valero went 3-4 on Saturday as his hitting streak moved to 13 games for the Hornets’ slugger. Heard and Bojorquez both added two hits for Sac State in the losing effort.
Sunday: Hornets clinch series with 5-3 win
The Hornets went the entire month of March without winning on a Saturday or Sunday, going 0-8 over the month. After yesterday’s loss, it looked like more of the same but a win on Sunday clinched Sac State their first WAC series win of 2022.

Freshman Colin Hunter excelled on the mound, going 6.2 innings and allowing just one run while striking out seven. Hunter is now 2-2 with a 2.93 earned run average on the year.

Martin Vincelli-Simard with the 2-run home run to keep the Hornets in the lead. Sacramento State earns the series win over Utah Valley. pic.twitter.com/Ag5i8yZbPu

“We really needed that, it was a tough game, got close there at the end,” Hunter said. “We battled through it, the hitting was good, pitching was good. We had a real good team win, and a good series win.”

The Wolverines made it interesting through to the end by grabbing a couple of runs in the later innings but just like on Friday, Zalasky closed the door and helped the Hornets move to 5-7 in WAC and 13-14 overall.

Cesar Valero’s hitting streak came to an end after 13 games as Valero was hitless in Sunday’s win.

“I feel good about how we played this weekend, for the most part, we need to continue to get healthy, I think that’s the biggest concern right now,” Christiansen said.

In the midst of a seven-game-road-stand, the Hornets are set to take on the University of Nevada on Tuesday before another WAC series on the road against New Mexico State.