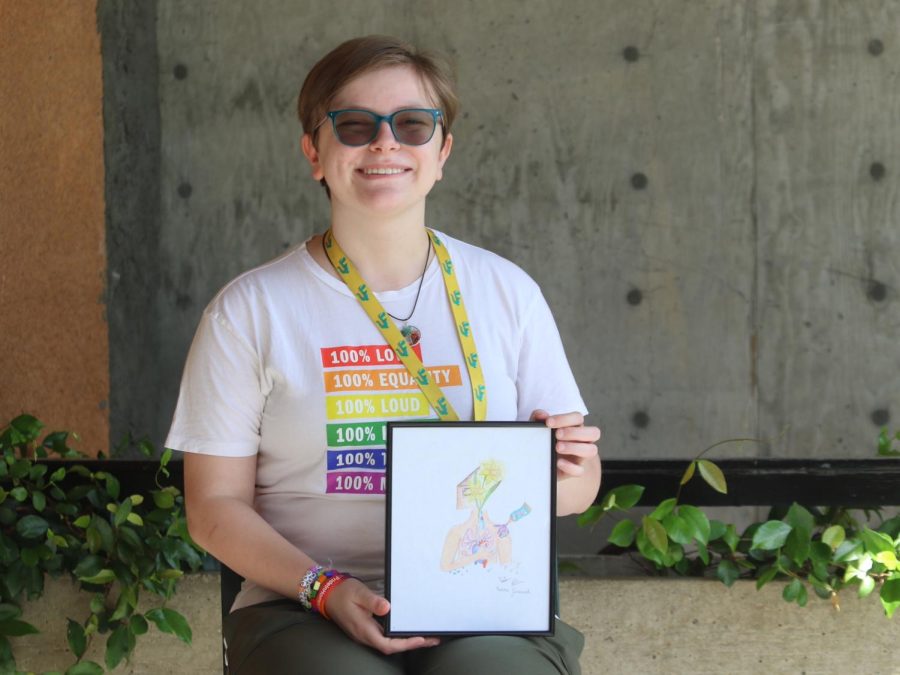 Kiara Janecek, 19, holds their piece “Untitled” depicting the effects and aftermath of sexual assault Wednesday, April 20, 2022. Janecek talks about their experience with sexual assault and artistic contribution in Sacramento State’s University Union art exhibit, “Our Voices Will Be Heard.”

The University Union Gallery’s newest exhibit, “Our Voices Will Be Heard,” features works from student artists and sexual assault survivors in order to empower victims and give a voice to sexual violence awareness on Sac State’s campus.

The gallery is a collaboration between the University Union, Women Escaping A Violent Environment (WEAVE) and Student Health and Counseling Services. The collective statement by the artists in the exhibit says the collaboration serves as a cathartic and safe space for survivors of sexual violence and allies to come together and tell their stories during the month of April for Sexual Assault Awareness Month.

Second-year mathematics major Kiara Janecek, whose work is featured in the exhibit, said  the gallery was a way to express trauma and difficult experiences through a non-verbal medium.

“Talking about sexual assault can be really hard for a lot of people, and it’s hard for me because it’s such a personal thing,” Janecek said. “It’s very much not talked about enough, so if people can speak through art, they don’t have to use words. Art is just as valuable because you’re still getting that message across.”

Janecek used vibrant colored pencils to create their piece “Untitled,” which they said conveys a body that had been vandalized, using a house to symbolize it. They used these elements to show that through re-building, the house and person can be restored, even though it may not be the same, according to Janecek.

“I thought, if I can show others that they’re not alone and that it’s okay to talk about it, then I had to do this,” Janecek said. “I signed my piece, and I want others to be able to come to me and know that there’s a person out there that’s not afraid to say that they’ve experienced this.”

“Untitled,” displayed among other survivor’s works in this exhibit, is intended to spread awareness and build community on the subject of sexual assault on Sac State’s campus, according to Janecek.

Laura Swartzen, Sac State’s Confidential Campus Advocate, offers support to survivors of sexual violence. Her role is to provide a review of rights and options for student survivors of sexual assault, sexual harassment, dating violence, and stalking. Swartzen said it was important to use the gallery to highlight this topic and the comfort and safety that can be found within those who may relate to these works.

“Hopefully this exhibit shows students who are survivors themselves that we are taking steps here at Sac State to support survivors, to know that they are heard and that they have a voice on this campus,” Swartzen said. “Sexual violence impacts us all and it is not discriminatory in any means. We are here and ready to support you. We believe you.”

Second-year journalism major Madelaine Church expressed admiration for the evocative works and the artists themselves.

“I’m honestly moved by these art pieces,” Church said. “Each one holds a valuable meaning and they capture my eye. Sexual harassment isn’t a light topic to address, but I feel that these paintings conveyed this issue in a captivating way.”

“As a viewer, these pieces definitely make me feel empowered as a woman,” Gonzales said. “Being able to witness individuals that went through such trauma and hard times implement their pain into art is such a beautiful thing.”

Gonzales expressed her admiration for not only the pieces showcased but for the student artists as well.

“It’s incredible to also see other girls my age to not allow something as hurtful to get in the way of their artistic expression and further their journey as survivors,” Gonzales continued. “It takes a lot of strength, and I admire it immensely.”