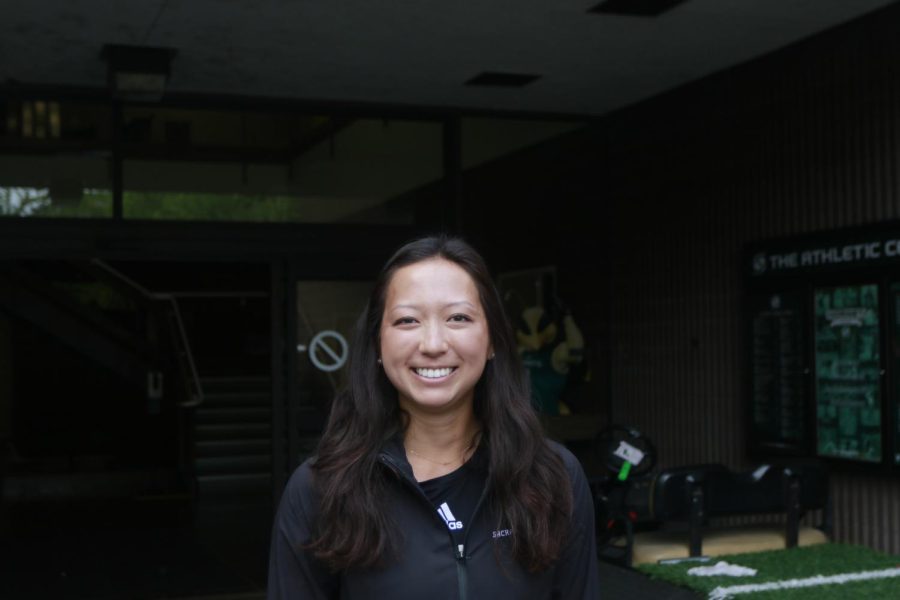 Tess Blair stands outside the Athletic Center on March 15, 2022. Blair was named Big Sky player of the year and freshman of the year in her first season at Sac State.

South Jordan, Utah native Tess Blair has been studying finance at Sacramento State since 2019. Outside of the classroom, she has been named first-team All-Big Sky in golf for two consecutive years.

Blair said she remembered her father spending so much time on the golf course that her mother told him to have her and her older sister tag along with him.

As a result, Blair and her older sister, Sirene ended up playing professionally after graduating from San Diego State in 2017.

Blair played in junior golf associations while growing up in Utah, and seeing how far her sister was able to go made her think she also had a chance to go far in golf as well, according to her.

With how important golf is to Blair and her family, she said it was very difficult for her when COVID-19 hit.

Ultimately, though, Blair said she feels that she lucked out because golf is an individual sport, so she was able to continue to play on her own and there weren’t very many restrictions during practice.

Blair said that her decision to come to Sacramento was a major change for her.

“I came from such a small town, and [Sacramento] is quite large,” Blair said. “It’s been great and I think it took a while for me to adjust to everything here, but I am very thankful and I feel very blessed and privileged to be here.”

One of the main reasons Blair chose Sac State? The weather.

“Utah is a beautiful state, but we have a lot of snow,” Blair said. “It’s really hard to not be able to be on real grass, and I can practice on the fake turf, but it’s just not the same. That was a big factor in coming here [to Sacramento] because of the weather.”

Blair said her coaches were one of the biggest reasons she came to Sacramento. She believes her coach cares  about the girls he recruits  as people, and not just as athletes, according to her, which is different from what she was used to back home.

“I was really thankful that she was interested [in coming to Sac State],” said David Sutherland,  head coach for women’s golf.

Sutherland said  he put in a lot of effort to recruit Blair. According to him, he was immediately impressed with Blair’s maturity, relationship with her family and coaches as well as her talent as an athlete.

“From the first time I really ever saw her play, I always believed in her as a golfer,” Sutherland said.

Assistant coach for women’s golf Cindy Mah-Lyford said she didn’t meet Blair until she came to Sac State. Today, Mah-Lyford remains just as impressed with Blair’s skills as she did when they first met, if not more.

“She’s very systematic and practices all parts of her game equally,”  Mah-Lyford said. “She’s at a level where she doesn’t really have any weaknesses,”

According to Mah-Lyford,  Blair’s golf intelligence and the many hours she puts into practicing make her almost invincible in the game.

As for Blair’s strengths as a golfer, Mah-Lyford said some of Blair’s biggest ones are the humility and selflessness she’s seen in her exhibit. One particular moment where she said she saw this was during their 2021 conference championship.

“We were at the final hole, [we] were in the lead, and she looked up at me and said ‘what kind of shot do I need here for the team?’,”  Mah-Lyford said.

Beyond the green, Blair shares a special friendship with Sneha Sharan, according to Mah-Lyford.

Sharan, a first-year psychology major from India, met Blair when she was recruited to play for Sac State from Bangalore. While she was still in India, she said Blair helped her with things such as creating her Sac State account and telling her the list of supplies she should bring.

“She was probably the only one on the team that really went out of her way to make me feel comfortable and get me settled into Sac State,” Sharan said.

Sharan said she really admires Blair and referred to her short game and her ball-striking as “incredible.” Outside of golf, the two often go out for sushi and have gone on many trips with other girls from the team.

“Golf is pretty much an individual sport, but she’s always there to make it a team atmosphere,” Sharan said.

“I’m not exactly sure what the future holds, but I didn’t know what I was doing for college, and I ended up here,” said Blair. “And it’s going great, so hopefully, everything will work out.”