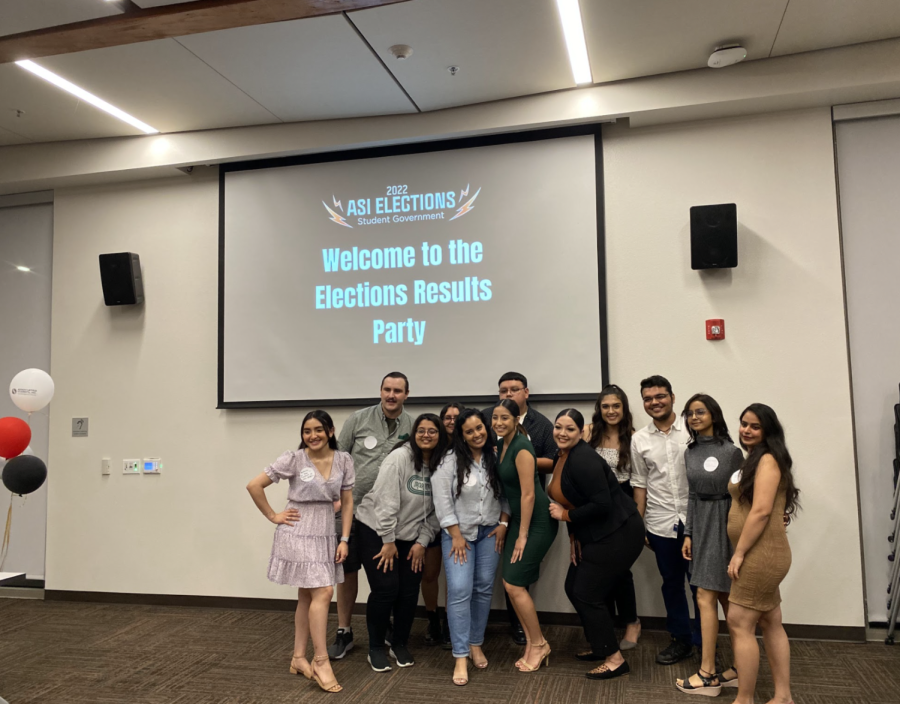 Newly elected ASI Government candidates pose for a group picture following the announcement of the voting results on Thursday April 7, 2022. The candidates will be serving their term from 2022-2023.

Students gathered Thursday inside the Elderberry and Beetle Room at Residence Hall at Sacramento State as loud music blared through the doors during a warm spring evening.

Members of Associated Students Inc. waited for the student government election results after the campus-wide polling that took place Wednesday and Thursday.

Salma Pacheco and Laura De la Garza Garcia won the presidential ticket after running unopposed. According to the results from ASI, only 9.6% of eligible voters participated in the election.

“I’m just glad that I got to make everyone proud today,” Pacheco said. “I believe there are some rules and regulations that don’t serve us Sac State students anymore. I also feel like we need to advocate for the diverse students on our campus.”

Nataly Andrade was elected Vice President of Academic Affairs. Her goals in her new position, according to her campaign statement, are to emphasize the importance of student mental health and to create guidebooks with resources for freshmen and transfer students.

“I really want to be someone that the students can trust,” Andrade said. “I am truly doing this because I want us to succeed.”

Despite the lack of attention paid to the election by much of the school’s population, some students still showed up for moral support.

Fashion major Nolan Ashworth accompanied his friend Jadie Beltran, who was elected as Director of Natural Sciences and Mathematics to provide support.

“I saw mostly posters around campus and it just seems like a pretty inclusive community,” Ashworth said.

Additionally, the winners of “Cash for Clubs” were announced. “Cash for Clubs” is a fundraiser held by ASI that gives students the ability to vote for their favorite clubs, which receive $5 for each vote.

First place in the fundraiser was the Marching Band, in second was the Esports Club and Mujeres Ayudando La Raza and the Softball Club tied for third.

Editors Note: ASI vice president Laura De la Garza Garcia is a rotational staffer for The State Hornet and was not involved in the reporting or writing of this story