‘You are not alone’: Out of the Darkness campus walk makes a triumphant return to Sacramento State

After a 2 year hiatus, the suicide prevention walk brings people together again 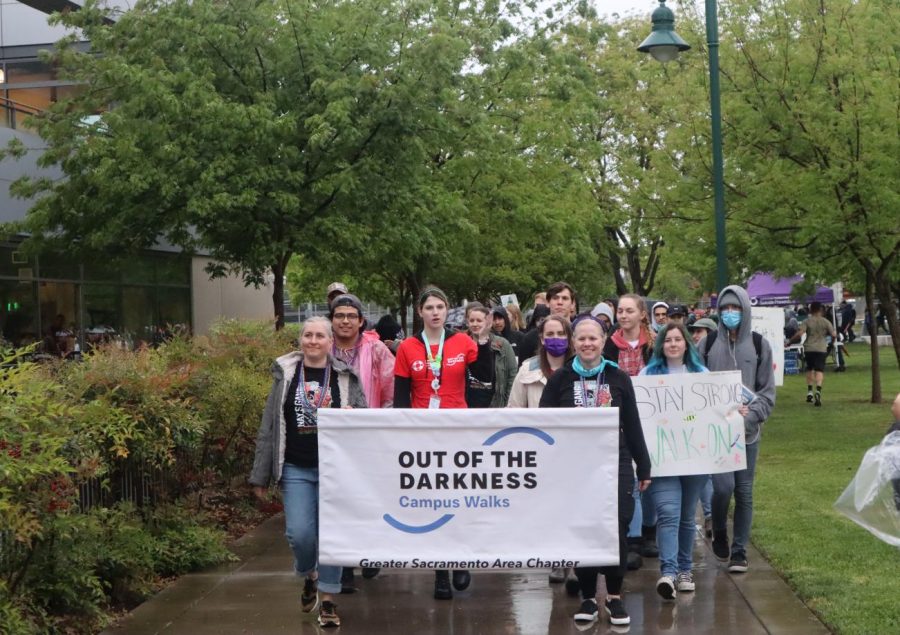 Participants end the “Out of the Darkness” campus walk at The WELL on Thursday, April 14, 2022. A banner was held by participants who led and identified the group.

Hundreds of participants and students gathered around at The WELL as the rain pattered down on a cold, gloomy Thursday afternoon.

For the first time since the pandemic started, the Sacramento State community came together to show support for suicide prevention and mental health awareness.

The “Out of the Darkness” campus walk for suicide prevention and mental health awareness.

The ceremony opened with speakers from AFSP, students, alumnae, administration members of Sacramento State and Sacramento Mayor Darrell Steinberg. They shared their thoughts and personal experiences connecting them to suicide prevention.

As a part of the event, AFSP promoted and organized a fundraiser from which proceeds would go toward suicide prevention research.

The walk promoted the fundraiser and the goal was to reach $30,000 in donations; a goal well within range for the foundation, as they have earned $25,697 as of April 15.

Alex Spencer Byrd, a member of the Sacramento Chapter of AFSP, commented on the turnout.

“For a post-pandemic rainy event, this is honestly one of the biggest events I’ve ever seen,” Byrd said.

Byrd said it’s important to support the people you care about and that one conversation can save a life.

“Everyone has something that they’re going through and mental health is such an important and ongoing issue and concern for folks,” Byrd said. “The main thing that we want people to know is that they are not alone in this.”

Sacramento State President Robert Nelsen stressed the importance of togetherness and helping others within the community.

“When I say that we’re a family, I mean it. Families support each other and we have a responsibility to be there for one another,” Nelsen said. “When you take Sac State into your heart, you have a chance to help someone else, and that’s the best thing a Hornet can do.”

Andres Ojeda, a junior at Sac State, reflected on his first experience at the “Out of the Darkness” campus walk.

“Coming from a Hispanic culture and being a man, it’s kind of hard to express feelings to others so you kind of hold back everything you’re going through,” Ojeda said. “It’s good to know no one’s alone and everyone’s going through things.”