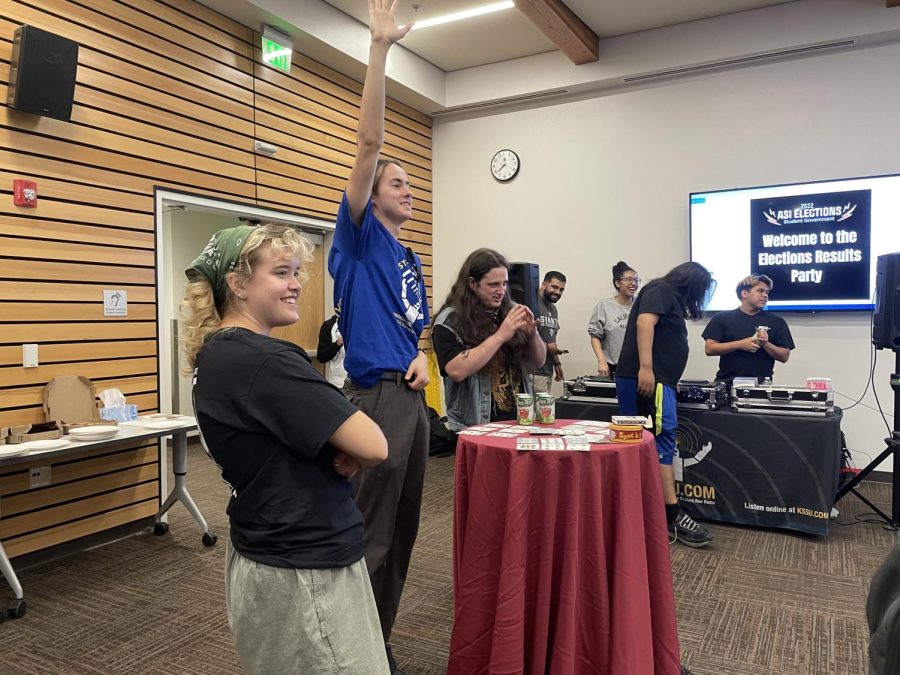 Students were invited for food and games on the ASI election night hosted KSSU DJs and card games on April 7. Hosting events like this needs to be more common for ASI if they want to accomplish their student outreach goals.

Associated Students Inc. is supposed to be the voice of the student body but the campus is silent. Nobody knows what ASI is. That is, students have no idea who they are until it’s time to elect its members.

ASI has tried to make student outreach a priority semester after semester with no measure of success.

ASI president Samantha Elizalde spoke on student outreach all throughout last fall, organizing tabling events for ASI to talk to students but there is nothing to show for it.

This year’s ASI administration spent a majority of their time changing the language in their policies to be gender inclusive and increasing the number of followers they have on social media amid a struggle to fill committee chairs.

I was the ASI beat news reporter last fall and I saw firsthand that the organization makes an effort to be available to students.

Every Wednesday from 2-4 p.m. their meetings are open for students and staff to attend and speak their mind. They meet every Wednesday in the Green and Gold room on the third floor of the University Union.

They offer online recordings of only the official board meetings for students who are unable to attend.

Their meetings are rigorous in time management and accountability for each director. As a unit, they work diligently to accomplish what’s asked of them.

The problem with ASI is that they are an organization of advocacy and don’t have enough control over the campus to make changes that students can see, making them a fish out of water when it comes to elections with scholarships sometimes totaling over $10,000 on the line for them to be able to do the work.

What does ASI need to do?

Coffee socials, meet and greets and campaigns for student outreach instead of just election campaigning will help ASI stand out at Sac State.

ASI must become part of Sac State campus culture and not just watch from the safety of their board room. Sac State has an amazingly diverse community and ASI understands that with that diversity comes the need for an equally diverse approach to engaging with the student body.

Sac State has coffee drinkers, sure, but students love pizza too; feed the students and tell them about the ASI food pantry, give out gift cards and share connections with the CARES office, who is responsible for rent relief and other financial opportunities that help keep student finances in the black. Host game days and trivia events so that ASI isn’t just checking in on the culture of Sac State, but becoming a part of it.

The transition from discovering the culture on campus and becoming part of it is the ticket to ASI being successful in student outreach.
ASI Accountability
Every fall semester, ASI creates strategic priorities and goals that they want to accomplish and produces a review at the end of the year in order to hold themselves accountable.

ASI directors campaign on getting students what they want, but it’s a hollow promise when the divide between them and the student body is so expansive that it becomes hard to trust that directors are in tune with student concerns.

The frustration about their student outreach stems from the fact that the only time ASI shows students who they are and what they do, it’s during election season. The tabling events that they do throughout the semester are not enough.

In years past, ASI has done coffee socials for students to meet candidates and develop those bonds.

But even then, ASI directors knew that ASI wasn’t reaching a large enough chunk of the student body.

ASI candidate for vice president of university affairs in the 2011 election Liz Redford campaigned on student outreach over ten years ago.

Redford told The State Hornet that year that “a lot of students do not know what ASI is.”

This struggle to reach students on a personal level has been a problem for ASI for more than a decade and no elected official or candidate has been able to do anything about it.

Even with the increased presence and outreach capabilities of Twitter and Instagram, ASI can’t rise above a menial presence on campus

Students who utilize programs managed by ASI like the Children’s Center and Peak Adventures are directly affected by the management styles of the ASI board, but do these priorities and ASI programs justify the $10,000 scholarships that ASI directors receive?

The rest of their influence is in advocacy; in asking the Sac State administration to change their priorities to reflect the concerns of students.

When the ASI board voted in favor of changing the name of Columbus Day on Oct. 11 to Idigenous Peoples’ Day, they only agreed to advocate for the name change five days before the holiday.

ASI succeeded in asking Sac State to change the name of the holiday but the bar was so low that the tension and short time frame was a distinct example of the unnecessary conflict that these directors are responsible for.
Committee Positions
For the four months of reporting I did on ASI, I always hoped that a student would come in and take advantage of their public meetings.

ASI desperately wants to help the student body, but their student outreach is so unsuccessful, no one ever shows up.

Directors are given the floor to speak openly to the rest of the ASI board at their meetings. Despite this openness, ASI spends the majority of these meetings begging other members to help them fill vacant positions that they are a part of.

Meeting after meeting, the broken record spun. Without proper student outreach, they didn’t stand a chance filling those positions; a process that is a huge distraction from the work and budget that they have to interact with students.

A voter turnout of less than 10% in ASI elections which decides which students get $10,000 scholarships is not good enough.

ASI directors can petition to use ASI funds for events but a $10,00 scholarship gives them the independent ability to organize their own ASI events without dipping into ASI funds.

Whatever gets ASI engaged with students is what I hope to see from these newly elected ASI directors.