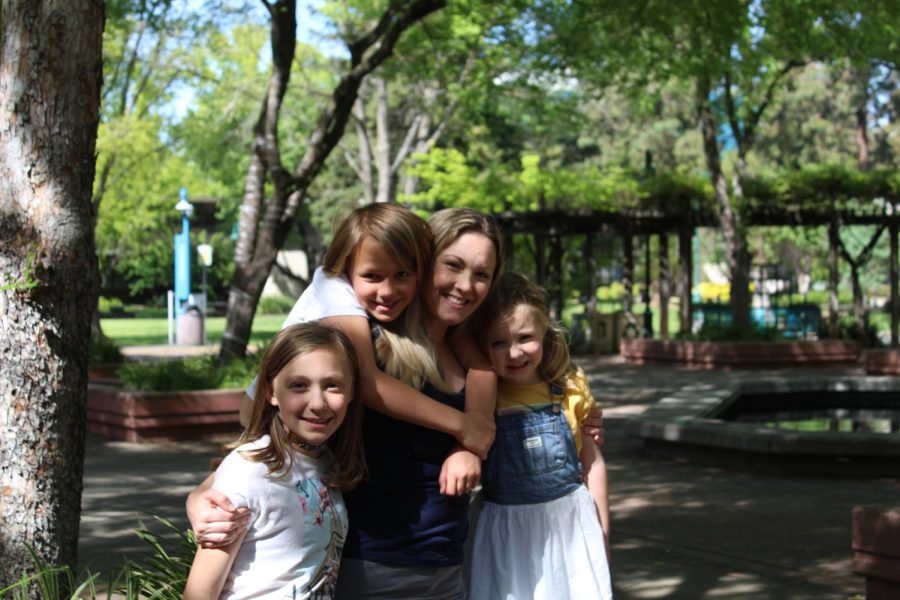 (L-R) Charlotte, Elliotte, Ashley, and Juliette Frost pose together in the quad near the library on March 31, 2022. Frost said she hopes her graduation will also be a celebration for her daughters and not just for herself.

While every student’s experience is different throughout their educational career, the student mothers of Sacramento State have made some unique sacrifices involving both their education and families.

Victoria Howard has been a student for six years and a working mother of one for the entirety of her college career. She said that becoming a mother is what drove her to further her education and become a college student six years ago.

“I had already started taking some classes but I wasn’t really sure where that was going to go while I was at American River College,” Howard said. “I ended up getting pregnant with my husband and we decided that we really needed to buckle down and have our stuff figured out. We have been going to school pretty much [my son’s] whole life.”

Howard is currently a part of the Special Education credential program. She says that once she receives all her necessary credentials, her goal is to be in a general education setting with special education experience and hopes to be in the range from kindergarten to second grade.

“I just feel like it’s very important to go into a general education setting knowing that you’re going to have students in your classroom that are going to have special needs,” Howard said.

Throughout her education, she has had to make sacrifices she never thought she would be facing. These sacrifices have involved both her college career and time with her family, according to Howard.

Since Howard and her husband are both full-time working students and parents, it has become difficult for both of them to continue in the program at the same pace, according to her, so she will be taking a leave of absence for the following school year.

However, she said that the biggest sacrifice she has made as a student mother is being unable to be mentally present for her son at home due to her online coursework.

“That’s the biggest one because I can’t get that time back. It was one thing when he was smaller,” Howard said. “He was surrounded by people who loved him so it was easier to make that sacrifice, but now he’s at an age where he’s understanding. You can tell that he doesn’t see us like he used to.”

Sac State provides resources for student parents in order for them to have as much assistance as they might need during their college career. Some of these resources include the ASI Children’s Center, The Women’s Resource Center, and Hornet Family Study Care.

Howard said she has never needed or used the resources provided by Sac State but she does advise other students to know what they are getting into before becoming parents. Students should be aware of their resources, the requirements of their educational programs, and the difficulties they are going to face as parents, according to Howard.

“My husband and I started the credential program not thinking that one of us would have to step back, but now we’re at a point where the credential program has become really hard, so we had to make a family decision for one of us to slow down,” Howard said. “That’s something we had to learn the hard way. So definitely know what you’re getting into. That’s the best advice I can give.”

Ashley Frost is in her final year of the nursing program and is a full-time mother. Frost said that she balances being a student and mother to her three daughters, ages 10, eight, and five by putting all of her school work away at 5 p.m. to be a present mother.

“My mornings start a lot earlier than my peers because I have to get kids up and fed and dressed and ready for school,” Frost said. “My evenings, generally I get home at around five, I pick up my daughter from the children’s center here on campus and head home and I put on my mom hat and I have dinner.”

Frost’s youngest daughter stays at the Sac StateASI Children’s Center on campus while she attends school throughout the day at Folsom Hall.

“The children’s center has been absolutely wonderful,” Frost said. “Through the nursing program there’s an added challenge to being a parent in this rigorous program and so I have been working with another student to develop an organization.”

Frost is working with the California Nursing Students’ Association which is specifically geared towards parents.

According to Frost, she envisions creating a “village” for fellow nursing students to create networking and a sense of community between parents in the program since many of them face a unique struggle with limited time.

“Being a mother is why I am here, I’ve always wanted to be a nurse and I have three daughters, so I feel an immense amount of responsibility in being a role model to them,” Frost said. “Maybe it’s because I have little girls and I really want them to see and have a strong female person to look up to, and I would love to be that person.”

Frost said she understands that this journey has also been difficult for her daughters.

“In the end, my hope is that when I am graduating they will remember that moment for the rest of their lives to see the end product of all that hard work that went into it,” Frost said. “It’ll be their celebration as much as it’s mine.”

Lexi Kielly, a Sac State alumna, is in her second semester of the special education teaching credential program with a master’s attachment. She is also a single mother to her three-year-old daughter.

“I usually wake up pretty early in the morning, get myself ready then get my daughter up and ready,”  Kielly said. “I live in Vacaville so I have to commute to Sacramento every day and my daughter’s daycare is also in Sacramento.”

Kielly is at her student teaching job from 8 a.m. to about 3:30 p.m. and has classes three nights a week.

“Sac State has helped me out, they do have a program where they received a grant that helps pay for childcare so I have been a part of that for about a year, they are paying for  50%  of my childcare which has been super helpful,” Kielly said.

Resources like the Parents & Families Program have monthly check-ins. Kielly said that everyone in the program is very supportive and helpful and she finds the food benefit program CalFresh to be a resource as well.

Kielly said that her days are usually long and challenging but hopes that in the end, it will be worth it.

“Being a mother is everything for me, I’ve always dreamed of being a mother and the fact that I am now is an amazing feeling and it’s important for me to show my daughter how important having an education is,” Kielly said.