‘Breaking out of the Box’ to be held on April 19 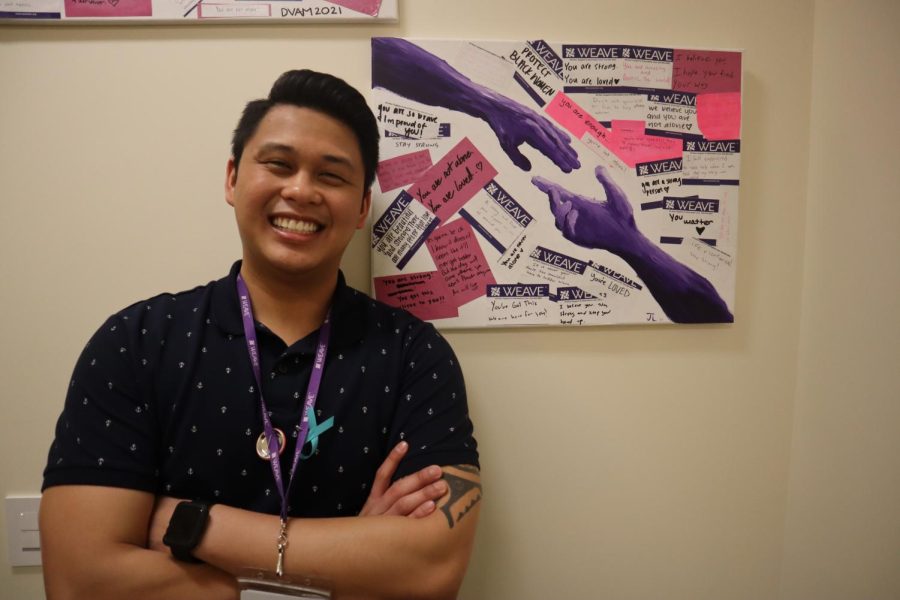 Youth advocate Leander Loh stands outside of the WEAVE office on Thursday April 13, 2022. Loh will be the keynote speaker of the “Breaking out of the Box” seminar that will be held at the University Union on Tuesday, April 19.

Sexual assault awareness month might be confined to 30 days, but for advocates like Laura Swartzen and Leander Loh, raising awareness of sexual violence is a never-ending effort.

Swartzen and Loh both work as confidential advocates through WEAVE– Swartzen at Sacramento State and Loh at Sac City Unified District schools.

“Breaking out of the Box” is just one of the events being held at Sac State in April.

Coordinated by Swartzen, the event aims to provide a safe environment promoting change and will be led by a seminar presented by Loh.

“It’s overall kind of just discussing what unhealthy masculinity can look like and how it contributes to violence in our communities and hopefully creating that new narrative around that healthier aspect [of masculinity],” Loh said.

Loh said that as someone who grew up cisgender and male-identifying, there were a lot of things he grew up with that he assumed were normal because they are the “societal gender norms that we live in.”

He said there are a lot of aspects of gender socialization (i.e. men don’t show emotion, men must be dominant or in control) that he finds, at least within himself, deeply rooted.

Men turn to aggression or violence if somebody threatens their manliness because it’s the only way they were allowed to show those emotions growing up, Loh said.

“With this presentation, I highlight those aspects of that unhealthy masculinity that we may not even realize,”  Loh said. “It can go from something not as severe like mansplaining and then it goes to something that’s severe like sexual assault.”

He said there are some healthy aspects of masculinity, also.

“I was hoping to kind of talk more of, like, ‘alright, how can we change our narrative? How can we kind of reflect and promote more community safety through the more healthy aspects of masculinity?’” Loh said.

While Loh does use gender normative language in the presentation, he said he thinks everyone can benefit from attending.

Swartzen said that the conversation is meant to be inclusive even though the description is aimed at allyship and the male-identifying community when it comes to ending sexual violence.

She said that for female-identifying or nonbinary persons, this can also be a validating conversation where they can see that maybe some of the treatment that’s displayed to them is violent and abusive, and they can hold people accountable for that behavior.

“It’s not necessarily targeting one group, it’s highlighting that historically, statistically, it is male-identifying folks who are the majority of abusers, but everyone has a part in ending violence,” Swartzen said. “What Leander really wants to open up is: it stems from gender normatives.”

For attendees who choose to ask questions or share during the presentation, Swartzen said that she and Loh promote sort of a “Vegas rule”: what happens in their room is going to stay there with everyone and they hope that people will protect this “vulnerable yet vital” conversation.

“Obviously we don’t have any control over what happens out of the room, but we will emphasize there are resources if something comes up and that retaliation is against school policy,” Swartzen said.

“Breaking out of the Box” will be held in Cottonwood Suite III on the second floor of the University Union on Tuesday, April 19 at 2:30.