Three months in: How the return to campus has impacted students 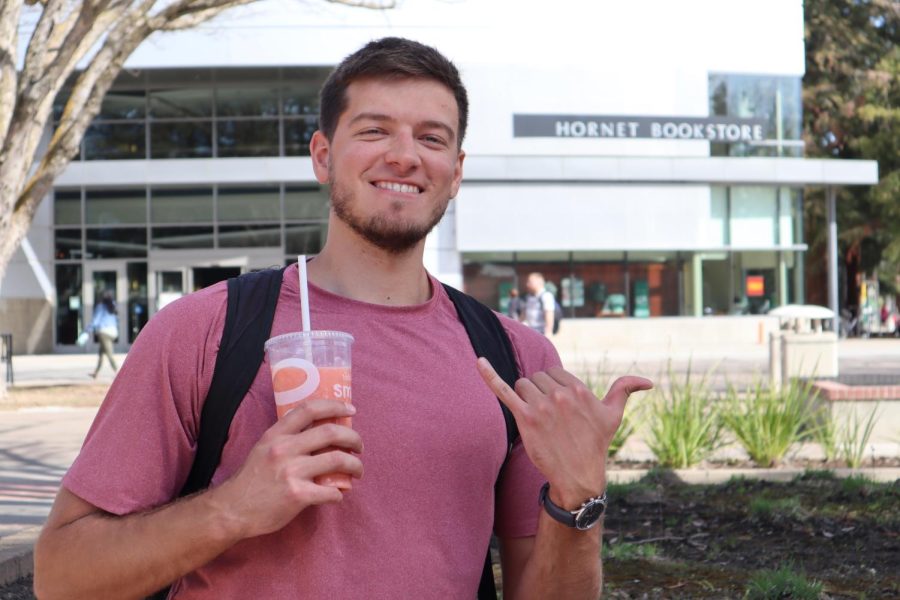 David Yaikov, a senior business major, poses in front of the Hornet Bookstore excited to be back on campus, on Tuesday, March 1, 2022. Yaikov says he is happy that more students are on campus at Sac State this semester. (Photo by Tyra Green)

Although the Starbucks line is longer than before and some have said it’s a bit harder to find parking, students are back and the campus is almost entirely back to normal. The Union is full of people again and so are many of the classrooms at Sacramento State.

David Yaikov, a senior business major, said he often walks around the University Union with a smile on his face. He remembers being on campus during last semester when it was mostly empty.

“I’ve never been happier in my life, and to be finally back on campus has never been better for me,” Yaikov said.

Most classes went back to in-person learning two weeks after the start of the spring 2022 semester. For many students, this meant being back on the Sac State campus for the first time since spring 2020 or even at all.

“I personally prefer to have everyone back here on campus because it seems that the campus is more lively and more productive compared to last semester where it just felt like a ghost town,” Yaikov said.

Last semester, there were only a handful of classes on campus, meaning there was very little activity going on. For some students, being on a quieter campus was something they said they had grown used to.

Chris Conte, a second year criminal justice major, was on campus during fall 2021. He reflected on how he felt having students back this semester.

“I was a little annoyed because everything is changing and I was kind of attune to the whole quiet life,” Conte said. “Now that everyone is here, it’s a little bit more rushed and busy, but I’m also glad we can go back to more of a normal state. I finally feel like I’m getting a college experience.”

Since most students were attending classes online via Zoom last semester, some said that made it hard for them to make connections with their peers.

“I feel like I’m having a lot more socialization and interactions so I’m in a better mood and I feel more motivated,” Kayla Strever, a junior majoring in psychology said. “When we were online, it was harder to know that people are going through the same struggles that you are.”

Some students said it was nice and didn’t feel overwhelming to see people return, but for others,  it may not have been the ‘normal’ they were used to. Spring 2022 is the first semester at  Sac State for some students like junior psychology major Cecilia Huerta, a transfer student.

“It was a bit nerve-wracking just because I haven’t been in a classroom setting where there are others around me,” Huerta said. “I was just so used to being in my room on Zoom so it was definitely a weird change for me.”

Huerta and Strever said they are glad to be back since there is finally a sense of normalcy on campus again. Buildings and services have fully returned to normal operation again, which has helped some students feel like they’ve come back to the way things used to be.

“It’s nice to be back in an environment that is school-oriented,” Faith Saechao, a senior majoring in psychology said. “You get to see everything and take advantage of the resources.”