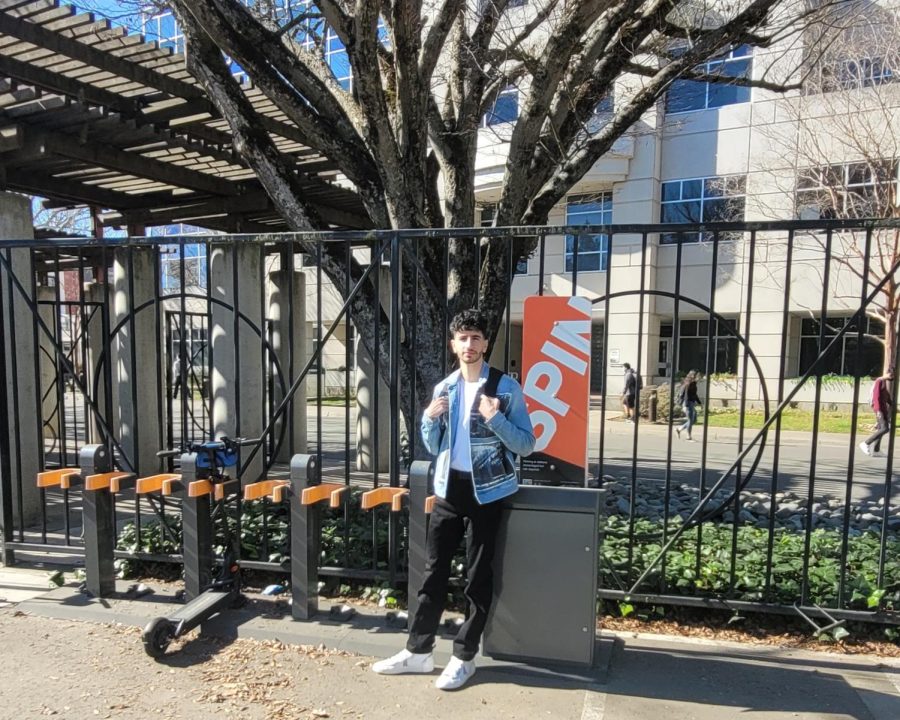 Sac State Junior Zaid Darwish never got a chance to use any of the Spin scooters that were on campus in previous semesters due to an expired license. For now, the closest he’ll get on campus is the unused charging station he’s shown by here at the racks near Guy West bridge on Feb. 27. (Photo by Casey Rafter)

The Spin app only took a few seconds to download to business major Zaid Darwish’s phone on the day he planned to rent one of the motorized scooters on campus.

As he made his way through the signup process, his driver’s license information continued to be rejected. Several failed attempts later, he realized that his license had expired.

“Just like that,” he said as he received his renewed license, he couldn’t find a single Spin scooter on campus.

It wasn’t until recently that Darwish learned that Spin’s parent company, Ford Mobility announced that they’d be removing scooters and charging stations not only from Sacramento State but any communities where their competition diminished profitability, leaving some students disappointed in the absence of a more convenient way around campus.

Lamenting his bad luck, according to Darwish, he recently found a discarded Spin scooter while cleaning along the banks of the American River by Sac State. Discovering what he called a “relic in a pile of river trash” felt surreal, he said.

“Lo and behold, there’s this shiny orange spin scooter,” Darwish said. “I’ve always heard online that the reason you can’t find them is because they’re in the river…but it was just weird to see it there.”

Some students did not welcome the existence of any scooters on campus when they began making appearances at Sac State ahead of the pandemic. Sac State alumnus Edward Newgate said he remembered the day he first saw a scooter on campus; he’d recently purchased a longboard, so he never had a chance to use them.

“From what I’ve heard from friends, the [scooters] weren’t convenient,” Newgate said. “They were only as convenient as the app you needed to download and use to activate them, and the app sucked from my recollection.”

According to Sac State’s associate vice president of risk management Gary Rosenblum, Spin gave the university a heads up about their exodus from campus only a week in advance of their end to operations.

“They stopped operating during the pandemic when we were in our depopulated mode,” he said. “When we started bringing people back, they were operating, and then they made a business decision completely to stop operating independently of us or anything we were aware of.”

Six months after being named the new CEO of Spin, Ben Bear made an announcement on the company’s website that they planned to exit nearly all markets globally. The post emphasized that “free-for-all markets” made the company’s profitability uncertain and that, in markets where scooter vendors are regulated and limited, Spin has seen twice the profit from their existing distribution.

Rosenblum said Spin recommended a company to consider as a replacement, but the university is still weighing its options.

City of Sacramento regulation prevents the operation of GPS-enabled devices like Spin scooters due to the geofence in place around the campus. Rosenblum said that without contracted approval from the university, the rentals shut down at the border of that geofence.

“That’s why you see scooters piling up around the entrances and exits to the university,” Rosenblum said. “The agreement with the scooter company allows them to unlock their geofencing on campus.”

Contracts between Sac State and any scooter companies do not allow for any financial benefit to the university, according to Rosenblum.

“The only money involved is between the scooter company and their riders,” Rosenblum said. “We’re just giving them the ability to unlock the geofencing at certain parts of campus. Anyone who operates in Sacramento has the opportunity to operate on campus.”

According to Rosenblum, the university welcomes the use of scooters on campus, as long as riders use them responsibly and with caution.

“We like the idea of scooters and think they’re valuable in our mix of transportation for our students and employees,” Rosenblum said. “Especially to reduce the amount of parking spaces or traffic and good for the environment. We just don’t want people scooting through pedestrian zones throughout the middle of campus.”