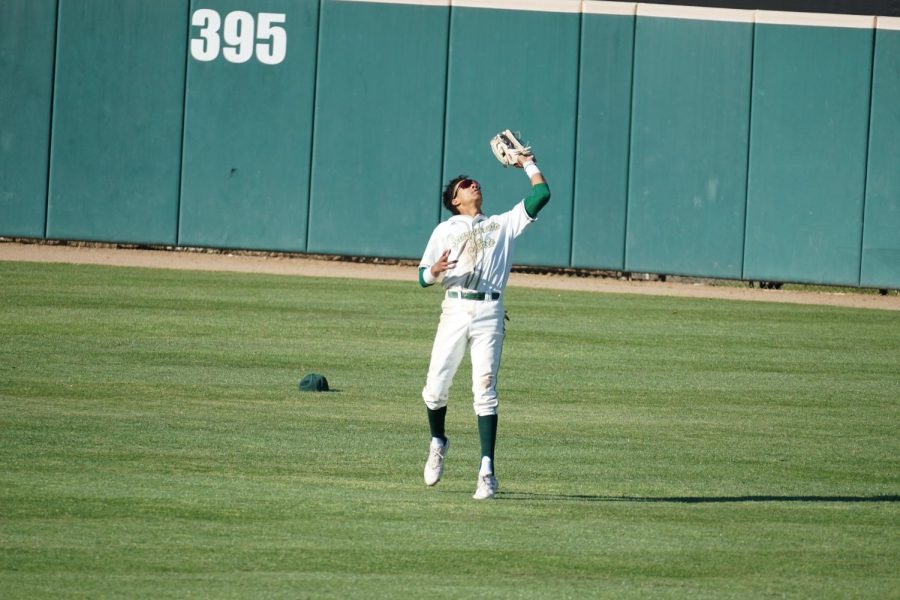 Sophomore outfielder Josh Rolling loses his cap as he catches a fly ball Friday, March 4, 2022 in a 21-4 Sacramento State win over Houston Baptist University at John Smith Field. The Hornets lost four of five games this week, after starting the year off 7-0.

In their final series before Western Athletic Conference play, Sacramento State struggled against Houston Baptist University, dropping three-of-four as the Hornets’ record moved to 8-4 after starting the week 7-0.

After their hot start, and earning a rank as high as #20 in the nation, the Hornets followed up a stupendous start to the season with a 1-4 record. Sac State’s first series loss comes with conference play right around the corner, starting next week.

After a blowout win on Friday, Sac State couldn’t quite keep up with the Huskies, losing the final three games of the series by a combined seven runs. Though the Hornets outscored Houston Baptist on the weekend by 25-15,  Houston Baptist left Sac State with a series win over a ranked opponent.

“We pitched well enough to win all four games, so that’s a positive,” manager Reggie Christiansen said.“Offensively we’ve hit a stretch where we’re not really firing on all cylinders right now.”
Friday: Hornets enjoy a comfortable 21-4 win to open series
After Tuesday’s loss to Cal Berkeley, Sac State responded with a resounding 21-4 win in the series opener against Houston Baptist. The game was planned to go a full nine innings but was called short due to the 10-run mercy rule after the seventh.

The 21 runs were a season-high for the Hornets, their previous high was 11 runs, which they had on opening day in a win versus Northern Illinois.

Only five other Hornet batters have had three home runs in a game in school history while no Hornet had ever had double-digit RBIs in a single game up to this point.

“We kind of rolled out with no energy on Tuesday, we had to change something up, that wasn’t going to play the whole season,” Valero said. “Today we came out swinging the bat, and it went well.”

Sac State sophomore pitcher Eli Saul got the start, throwing at least three innings before turning things over to the bullpen who pitched four shutout innings to close the game.

Freshman Noah Lucchesi was on the mound for Sac State in game one of Saturday’s double-header. In Lucchesi’s first two starts of the season, he held opponents scoreless over nine innings. On Saturday, Lucchesi gave up his first runs of the season. He allowed two runs over five innings while picking up the loss, causing his earned run average to grow to1.29 over his first three college starts.

Senior infielder Nick Iwasa had half of the team’s hits himself, going 3-4 with an RBI single which drove in junior outfielder Trevor Doyle for the Hornets’ lone run.

“I think it’s just about sticking to the approach we have, we’re given pretty good plans before every game,” Iwasa said. “Sometimes you just got to stick to them and be a little more patient at the plate.”
Saturday Game Two: Hornets lose 3-2, swept in Saturday’s double-header
The Hornets lost the first game of Saturday’s doubleheader with just six hits. In game two, however, that number was split in half as Sac State got only three hits in another Hornet loss.

All five of the game’s runs were scored in the fourth inning and it began when Houston Baptist’s junior catcher Parker Edwards launched a three-run home run to put the Huskies up 3-0.

In the bottom of the inning, Sac State found themselves with the bases loaded with just one out. The Hornets didn’t put the ball in play the rest of the inning but still managed two runs.

Sophomore catcher Carson Blatnick was hit by a pitch which drove in sophomore shortstop Jorge Bojorquez, the next batter sophomore infielder Nick Iwasa was walked to drive in senior Steven Moretto to bring the score to a 3-2 Huskies lead. The walk and hit by pitch were sandwiched between two strikeouts of Hornet hitters.

“I think this humbled us a little bit, especially offensively, I think it’ll be good for us to get back to our approach,” sophomore infielder Gunner Gouldsmith said.
Sunday: Sac State loses 4-1, drops three straight to lose series
After a 7-0 start and multiple national rankings, Sac State was picking up buzz around college baseball. Since then, the Hornets have gone 1-4, scoring just six total runs over the four losses.

On Sunday, the Hornets struggled to get things going offensively, totaling six hits to go along with six walks, in the series’ only nine-inning game.

Doyle and Moretto combined for five of Sac State’s six hits and Moretto contributed two doubles, the Hornets’ only extra-base hits of the day.

“We didn’t handle the fastball very well today, which is a pretty good indicator of guys thinking too much, too many weak pop-ups, too many strikeouts,” Christiansen said.

On the mound, the Hornets turned to sophomore Noah Takacs who bounced back after a rough performance on Tuesday in the loss to UC Berkeley on Sunday. Takacs threw three and a third inning of shutout ball in his first start of 2022.

The Hornets earned a 1-0 lead in the fourth inning when Blatnick was walked with the bases loaded to score sophomore outfielder Josh Rolling. The last three runs the Hornets scored in the series were all off walks and a hit by pitch.

Freshman Tyler Stewart came in as relief to Takacs and recorded the final two outs of the fourth, things didn’t go quite as well in the fifth for Stewart, Houston Baptist scored three as they immediately took the lead from Sac State. The Huskies added another run in the sixth to extend the lead to 4-1.

The Hornets brought the tying run to the plate in the ninth, after the first two Hornets were retired, Sac State was down to their final out; Iwasa drew a walk and Doyle singled, bringing Valero to the plate as the tying run.

Houston Baptist opted to bring in junior reliever Austin Morris to attempt to close things out. Morris needed just three pitches to strike out Valero to end the game.

“When things aren’t going your way it can be hard to turn it around, you want to be the guy to get the other guys going so you press a little bit harder. When you’re down it’s hard to not make it about you, and make it about the team,” Iwasa said. “The biggest thing is to not let this rollover.”

For the first time this season,  the Hornets will look to rebound after a disappointing week of baseball heading into conference play.

Sac State is back in action Tuesday at John Smith Field in Sacramento as they host Saint Mary’s at 4:00 p.m. for their last game before conference play.