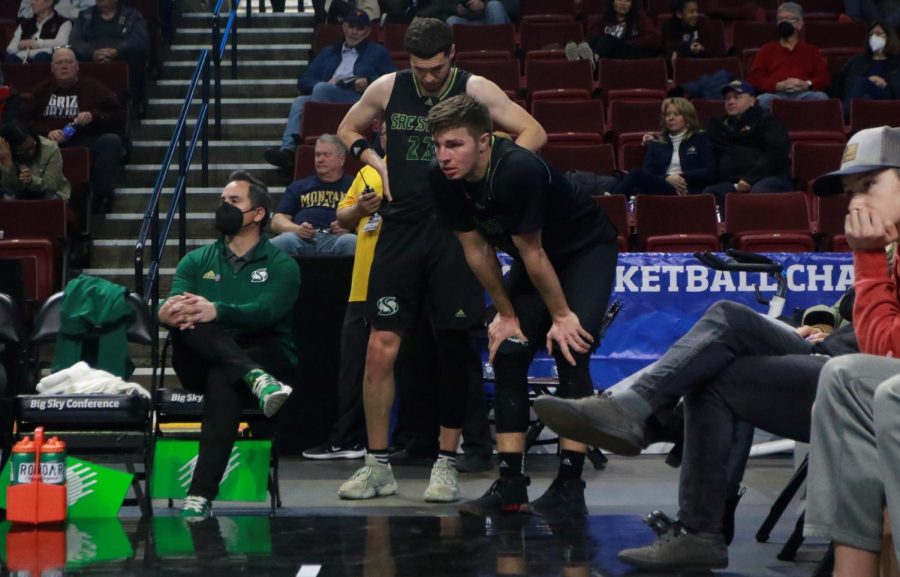 Senior forward Bryce Fowler and senior guard William FitzPatrick sit on the sideline after checking out for the final time in their second-round loss to Montana State on Thursday, March 10, 2022. The Hornets lost to the Bobcats 83-61 in the Big Sky tournament.

It seemed like they were just finding their stride, but for the Sacramento State men’s basketball team, it all ended in Boise, Idaho with an 83-61 loss to the Montana State Bobcats in Idaho Central Arena on Thursday.

The Hornets (11-18, 6-14 Big Sky) started things off in dominant fashion against the No.1 seeded Bobcats (25-7, 16-4 Big Sky), stunning the heavy-leaning Montana State crowd within the opening minutes.

Just like interim head coach Brandon Laird said after Sac State’s first-round win against Idaho, the team played through senior forward Bryce Fowler and had to live with the results.

There wasn’t a soul in Idaho Central Arena who could stop Fowler one-on-one and everyone knew it.

He went to work. Fowler opened the matchup torching the Bobcats on every level, but mostly with his mid-range jumper. The offensive prowess of the fifth-year senior was a catalyst for an explosive stretch for Sac State out the gate.

At one point, the Hornet lead was at 14-6 with under 15 minutes remaining in the first half. Everything was going their way.

It looked like Sac State, up eight points against the best team in the conference, had a real chance at an upset in Boise.

Montana State finally came back to life. Near the 13-minute mark, the Bobcats went on a 6-0 run to cut the lead to two at 14-12. From that point on it was all Montana State with the Bobcats stringing together multiple stops against the Hornets.

Despite Sac State getting out to an early lead behind Fowler’s 14 first-half points, Montana State found their stride and erupted with six straight made field goals.

The second half was more of the same, with the Hornets’ season slowly but surely dwindling to its end.

Sac State was beaten every which way by a great team, and there was nothing they could have done.

The Bobcats dominated inside as they shot the three-ball well and got out in transition – the Hornets were left stunned.

Despite the Hornets being blown out by a team that is likely an automatic bid to the NCAA tournament, there is a lot to look positive on for a squad that went through so much.

“Sac State basketball is a program that every basketball player dreams of,” William FitzPatrick said.

As for fifth-year seniors Fowler and guard FitzPatrick, the Hornets came to an end but they left with no regrets.

“Definitely no regret there,” Fowler said about his decision to return to school for one more season. “I love this school, love this team.

After a long season that saw many ups and downs, this program has many questions:

Will Brandon Laird return? Who will be the new core of the team? Who’s going to transfer?

These are questions soon to be answered. As for now, the current regime has a lot of reflecting on what they were able to accomplish in their time.

“I’m so proud of who they are and how they finished the season,” Laird said. “They had great careers and they really had a tremendous  impact on our program.”