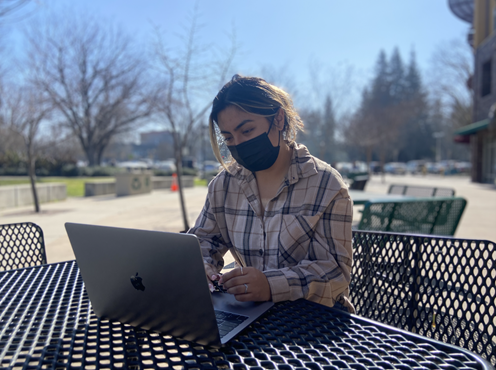 Second-year psychology major Margaret Rocha sits outside the American River Courtyard Market on Thursday, Feb. 10. Rocha said she has concerns over where to get tested for COVID-19 as a new resident in Sacramento.

Maria Grove, a first-year biology major, tried ordering a test for her dorm, but discovered that someone else had already ordered one to her address.“I’d like to have an at-home testing kit just to be available for me,” Grove said.

Four free at-home COVID test kits became available through the United States Postal Service on Jan. 18; however, Sac State students living at Hornet Commons and the dorms have reported a lack of access to the tests.

According to students living in on-campus housing, the reason for the struggle is the USPS policy that limits each address or household to just one order.

Some Sac State students living in the Hornet Commons or other shared student living communities have found that their one permitted order had already been used by co-tenants when attempting to order tests through the USPS website.

Zach Corbitt, a first-year kinesiology major living on campus, said he thought it is unfair that he is unable to receive the free tests while living at the dorms.

“This is our home just like how every other family has their house,” Corbitt said. “I do think that there should be a way for them to give us tests.”

If a student is unable to receive testing kits from USPS, it would require them to seek out testing elsewhere or simply go without.

Students and staff who are exempt from being vaccinated are the only ones able to receive free testing on campus, according to the Sac State website. Those who become exposed can purchase a kit from the WELL if they have it in stock, which can be seen on the pharmacy webpage.

“I have not needed to get tested since being at Sac State, but I did look into where I would have to go,” Celene Talavera, a fifth-year journalism major, said. “… I have been told I would have to look outside of Sac State for testing.”

Talavera refers to the ongoing shortage of at-home testing kits that pharmacies throughout the county have experienced, which could make it difficult for these students to get access to one.

“While the school has made access to testing kits easier because they have them, the problem I ran into was attaining them because they were out of stock,” said Talavera. “They [WELL employees] also did not know when they would have any kits available.”

Margaret Rocha, a second-year psychology major, said she didn’t know how to go about finding testing sites off-campus, since she is new to Sacramento.

“I want something to be able to tell me ‘Oh look, you can go over here and get tested’,” Rocha said.  “Or ‘call this number if you have any questions or anything.”

According to COVIDtests.org, the free at-home testing kits from USPS are provided as part of a government-initiated plan to allow more access to COVID-19 tests to Americans when they need them.

Sac State has provided a map for students to search out free COVID-19 testing available through Sacramento County, if a student isn’t required by the school to get tested on campus, according to the section on their website.