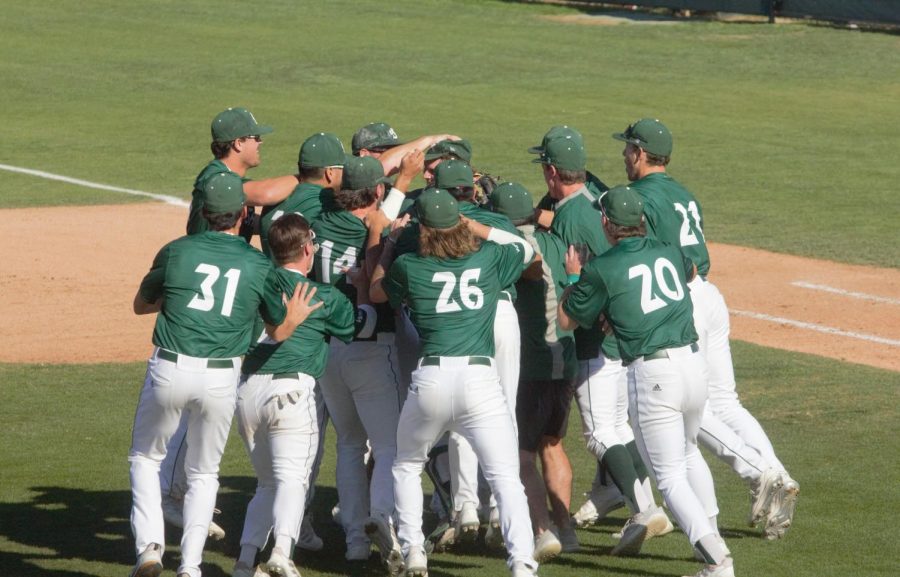 Even after Saturday’s game freshman pitcher Colin Hunter was still at a loss for words on what to make of his first-ever college appearance.

Hunter  threw  the second Division I no-hitter in the program’s history against Northern Illinois University Saturday  in an 8-0 victory at John Smith Field.

The game marked Sac State’s first no-hitter since 2017 when Hornet Justin Dillon threw a no-hitter against Northern Kentucky. Dillon’s no-hitter went a full nine innings, while Hunter’s was just seven innings, making it the first game of a double-header for the Hornets on Saturday.

The Hornets are now 2-0 through two games in the 2022 season, having outscored Northern Illinois 19-7 in the series thus far.

“That was truly incredible, he’s been throwing so well throughout the fall,” sophomore catcher Carson Blatnick said. “He’s put in so much work, we were happy to see it pay off for him today.” The bottom of the seventh began with a sliding play by senior third baseman Steven Moretto, who made a sliding play to his right to keep Northern Illinois out of the hit column.

With a runner on second and one out, Hunter struck out his ninth and final batter of the game, putting himself one out away from the Sac State record books.

“It was electric, after the first inning I knew Colin (Hunter) was in a groove,”  Blatnick said. “It was a bunch of fun catching him, it all just kind of clicked.”

The Hornets celebrated Hunter’s historic start to his collegiate career by moshing in the infield after sophomore shortstop Jorge Bojorquez’s putout sealed the no-hitter.

“For his first college start, that was pretty special,” manager Reggie Christiansen said..

Hornets’ baseball joined Division I in 1990. While this is only their second no-hitter since they merged, Sac State has enjoyed 10 straight winning seasons under Christiansen.

“He throws a lot of strikes, commands the baseball with three pitches, and works fast. We expected him to go out there and compete like he did,” Christiansen said. “But that was pretty special.”