Hornets kickoff their season with a 5-3 record 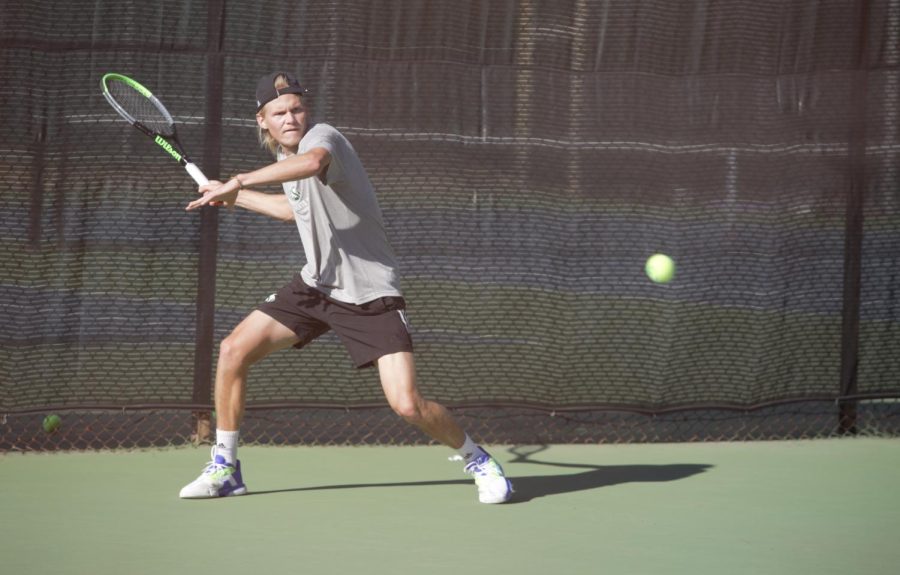 Sac State sophomore Rudolfs Aksenoks returns a serve to teammate Mate Voros on the other side of the court, Wednesday, Feb. 9, 2022, Asenoks is 4-0 this season in singles matches.

The Sacramento State men’s tennis team looks to shake off their two-game losing streak on Sunday as they hit the road to take on Saint Mary’s.

Saint Mary’s comes into this match on a four-game losing streak. The Hornets look to make it five.

Since their 5-1 hot streak,  the Hornets were unsuccessful in two very close matches vs UC Davis and USF. On paper, they are 50/50, according to assistant coach Mikus Losbergs.

“Win or lose, tomorrow is a new day,” Losbergs said. “We will just work harder than we worked yesterday.”

Even with these two losses and now standing at 5-3, it is still a very fast start for the Hornets.

The last time the men’s tennis team kicked off their season with a 5-3 record was in 2017.

“The way we practiced, the way we worked, every day got them super ready for this season,” Losbergs said.

It’s the first time the Hornets won three matches on the road since being promoted to Division I in 1999.

“Last semester in the fall the work had been done, we did lots of conditioning, lots of tennis, throughout that 3-4 months,” sophomore Mark Keki said. “So I think that everybody is in great shape both physically and mentally and I think [that is] one of the reasons we could do an early start this season.”

Although this year’s team is fairly new, the Hornets have been able to create chemistry and push each other to win games.

“The diversity we have now is with having guys from different schools transfer, having another guy from Hungary, having a guy from a different division transferred to our school,” sophomore Rudolfs Aksenoks said. “You know, it’s so diverse that I feel like we all bring something different to the team, and overall it just gives more to the team.”

Aksenoks is 5-0 this season and has not lost a singles match. Followed by his teammate Hayden Rand who is 3-0, as they both stay undefeated in singles.

Doubles has been one of the Hornets’ strongest points overall. They have yet to lose a doubles point being 8-0 in this season.

Keki and his doubles partner, sophomore Mate Voros are 7-0 in doubles this season.

Part of the reason why the Hornets have been able to have success in their first few matches of the season is because a few of their transfers already have collegiate experience.

“The two Concordia guys and Ori and Patrick bring 2 years of experience and that helps a lot,” head coach Kevin Kurtz said.

The Hornets have kept the opposing team to 0 in four of five matches won this season.

According to Losbergs, the experience that the new transfers bring combined with the experience of the older players demonstrates how resilient the team can be.

Despite their struggles in the past two games, the Hornets are looking to turn the momentum back in the right direction this weekend and it starts with consistency.

“The margins are so small that every point counts, every shot counts, and every practice counts,” Losbergs said. “You gotta just bring it every day.”