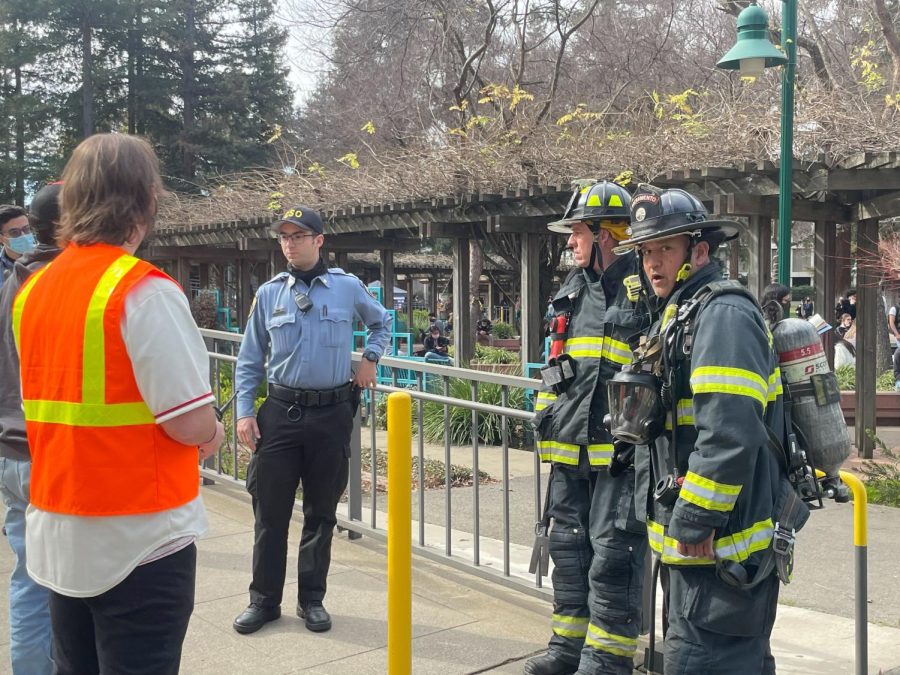 Sacramento Fire Department stands outside the Sac State Library with Community Service officers and staff members after the library was suddenly evacuated Wednesday, Feb. 9. The fire department arrived on the scene quickly and gave the all clear after just a few minutes for students and staff to return to the building.

Fire alarms went off in the Sac State Library this afternoon, followed by the Sacramento Fire Department arriving to assess the situation.

Students and faculty were reportedly evacuated from the library as the fire alarm blared, and library staff dressed in bright orange safety vests escorted them out toward the quad.

The fire department gave the all-clear before long, and the situation was resolved quickly, leading some to believe it was simply a false alarm.

BREAKING: The Sac State Library has been evacuated. Sacramento Fire Department is on scene now. pic.twitter.com/CRsDcgmpXx

Rachael Davis, the Department head of the Sac State Library, said that the fire alarms are very sensitive, and even the slightest amount of smoke can set them off.

“Their sensors are sensitive and any type of smoke could sound the alarm, even if someone was vaping,” Davis said. “The important thing is that they got the all-clear from the fire department.”

The lack of information about the situation, combined with the fact that it was resolved so quickly, led to some speculation about the cause for the alarm.

Nate Barbre, an economics major, was tabling for the Student Economics Association when the alarms went off and the students began pouring out of the building.

“When I used to work in the dorms it was not uncommon for students to be smoking in the bathrooms or in places they shouldn’t be, which could have caused the fire alarms to go off,” Barbre said.

The men’s bathroom on the third floor of the library was reportedly propped open, but it cannot be confirmed at this time whether or not that was the source of the smoke that caused the fire alarm to go off.

At the current time, we cannot confirm the cause of the alarm, and we will update the story with more information as the situation develops.