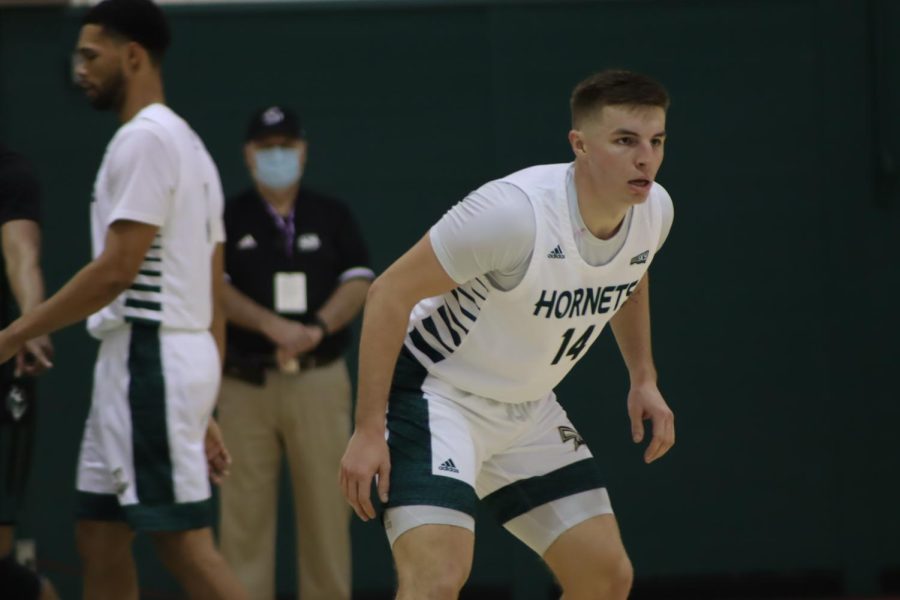 Senior guard William FitzPatrick guards the perimeter against Portland State Saturday, Jan. 15, 2022 at The Nest. The Hornets got a second straight loss against Eastern Washington Thursday in a 75-62 loss to the Eagles.

In response, the team prioritized being positive despite the struggles.

“We know that a blueprint exists,” head coach Brandon Laird said. “The challenge for us is just being able to find a level of consistency in terms of doing that.”

That blueprint was nonexistent for the Hornets (5-8, 1-5 Big Sky) as the Eagles (10-7, 4-2 Big Sky) dominated on almost every front from tip-off to the final buzzer.

To open the game, the Eagles caught the Hornets off guard with their half-court playmaking.

Sac State was able to match the Eagles’ offense with their own shot-making at first, but Eastern Washington’s ability to cut off-ball and make passes in tight windows wore out the Sac State defense and put them in an early deficit.

Slowly but surely, the Hornets’ offense began stumbling as they fell behind 18-7 within the first six minutes of action.

“It’s a long season, there are going to be some ups and downs, and right now our offense isn’t putting out the results we would like,” senior forward Bryce Fowler said. “We are going to stick to what we do and the results will come.”

Sac State made 19 shots in the evening, with only 36% of shots on all of their field goals for the entire game.

Despite trailing early, Sac State did find a rhythm to make some runs in the latter part of the first half. The Hornets were able to get back their traditional style of play after getting control on the glass which is rooted in playing in transition.

Junior center Jonathan Komagum, who had missed the previous two games due to COVID-19 protocols, finished the game with 8 rebounds and served as the engine for the Hornets as they made a run to close the first half, trailing 38-29 going into the break.

“It felt good being able to play again after being out for a whole week, it gave me a chance to watch, film [and] reflect on how I can help the team more,” Komagum said. “My only focus going into the game yesterday was to do what I could to help us win.”

Though the Hornets did the dirty work on the boards and put on a full effort display in a physical matchup that saw a lot of fouls, their offensive issues proved to be their downfall as Eastern Washington won, landing Sac State near the bottom of the Big Sky standings.

“This is probably the most challenging stretch of our schedule,” Laird said. “We’re staying optimistic and we’re just keeping the focus on the big picture in terms of trying to get a little bit better each day.”

The Hornets’ next game is Saturday against the University of Idaho in Moscow with tip-off set for 2 p.m.