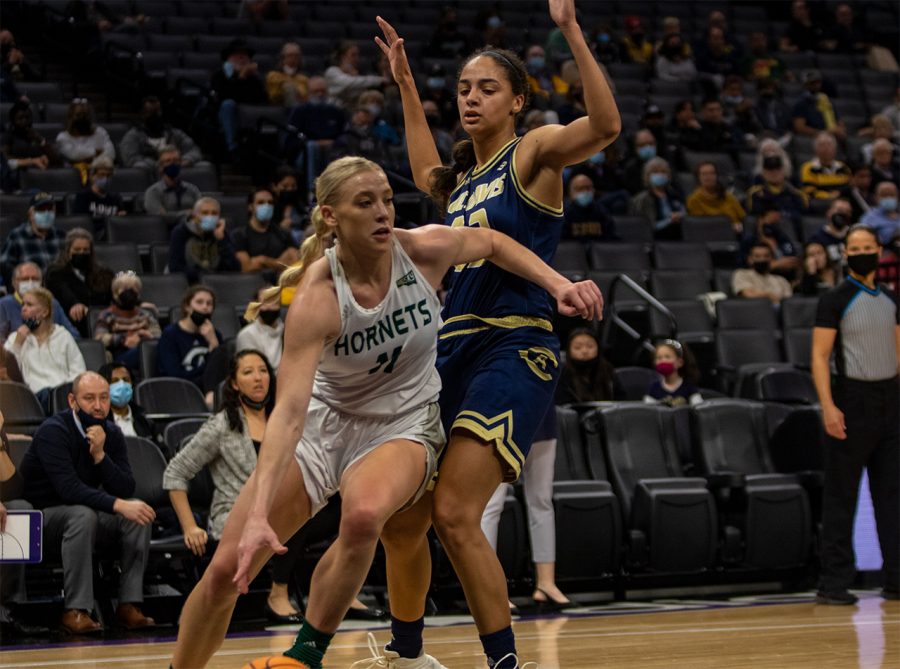 Sacramento State women’s basketball senior guard Summer Menke drives to the basket in a 75-46 loss to UC Davis on Nov. 23, 2021. The Hornets brought their record to 4-6 with a 60-50 road win over CSU Bakersfield on Wednesday.

Sacramento State women’s basketball (4-6), broke its three-game losing streak with a 60-50 win against CSU Bakersfield (1-6) in Bakersfield at the Icardo Center on Wednesday.

The Hornet defense has struggled of late, but they were able to turn around this game, running players off the three-point line and shutting down anything that came down the lane, especially in the third quarter.

“We have been working hard for a long time on our defense, and their hard work was rewarded tonight,” said head coach Mark Campbell.

Although the Hornets were able to clamp down on defense, they also struggled on offense in the first half without the Big Sky’s leading scorer graduate guard Lianna Tillman.

Despite Sac State looking sloppy early with five first-quarter turnovers, the Roadrunners were unable to capitalize off the Hornets’ mistakes.

Besides the turnovers, both teams were almost identical as they both shot 40% and scored 10 points each in the opening quarter.

Although the Hornets were able to clean up the turnovers in the second quarter, they continued to struggle on offense. Fortunately, the Roadrunners struggled as well offensively.

The difference would come from the three-point line as Bakersfield was able to go three of four and Sac State was unable to cash in from three.

The Hornets came out in the second half ready to dominate led by both sophomore center Isnelle Natabou and senior guard Summer Menke.

Sac State suffocated the Roadrunners on the defensive end, forcing them to go 1-13 shooting while the Hornets were on fire going 8-13 from the field.

Menke had a look in her eye that she would not let her team lose the game, and it showed in her play as she would be super aggressive in the paint resulting in her getting to the free-throw line and grabbing rebounds.

“Every game I’m doing my best to perform in the way I know and to be confident in my every move,” Natabou said.

Not only did the Hornets outscore the Roadrunners, they also dominated them on the boards, winning the rebounding battle 13 to 4.  The Hornets’ offensive surge allowed them to go into the fourth quarter up 44-34.

Menke would continue to be aggressive in the fourth at one point hitting the ground pretty hard looking like she might have to sit.

“It was a jump ball, and my shoulder got caught in the middle,” Menke said. “It’s pretty sore, but I will be OK.”

Although Menke and Natabou would dominate the statistics sheet, the way the Hornets played defense and stepped up with Tillman out was a team effort.

Even when Bakersfield started to full-court press senior guard Jazzy Carasco who stepped in to play point guard and caused a few turnovers, it would not be enough as the Hornets would go on to win 60-50.

“A lot of people stepped up today with Lianna out,” Menke said. “We were shaky at first, but then we calmed down and got through the press by sharing the ball.”

Tillman’s status is day-to-day, but she is scheduled to play in the Hornets next game against UC Santa Barbara on Saturday, Dec. 18 at 4 p.m.