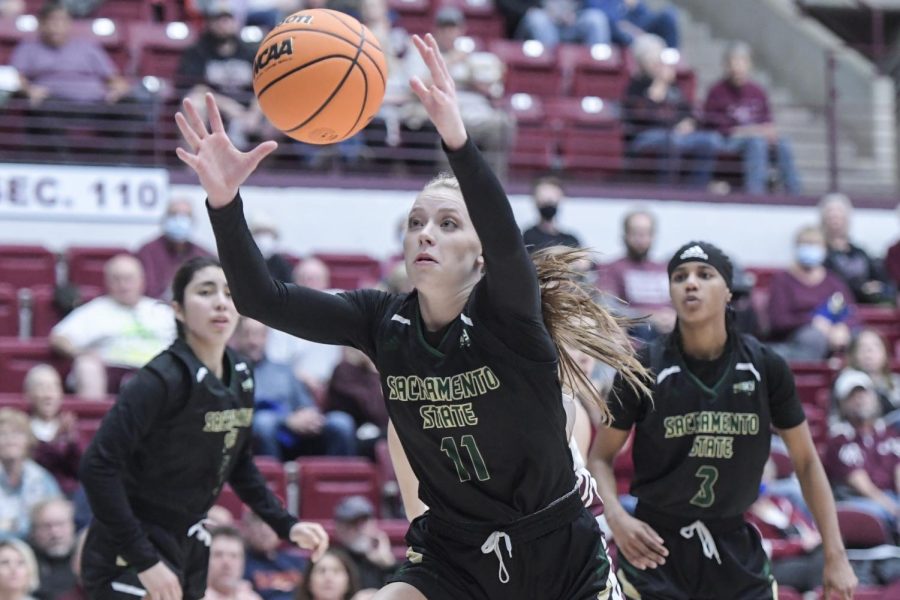 Senior guard Summer Menke going after a loose ball on Thursday, Dec. 2, 2021. Sacramento State lost to the University of Montana 75-59 in their first conference matchup on the road.

Despite jumping out to a fast 9-0 lead, Sacramento State women’s basketball lost its first in-conference matchup on the road against the University of Montana 75-59 on Thursday at Washington-Grizzly Stadium in Missoula, Montana.

The Hornets (3-5) looked impressive early on, but their defensive woes caught up to them again and would let Montana (6-1) get hot and stay hot.

After erupting to an early run on offense, the only other points in the first quarter would come from a three by senior guard Summer Menke with over six minutes. Toward the end of the half, Montana picked up its defensive pressure and went on a run themselves to make it 12-11 at the end of the quarter.

In a second quarter battle, sophomore center Isnelle Natabou dominated the paint scoring 10 points and grabbing three rebounds. She would finish the game with 15 points and 13 rebounds adding her fourth double-double to the season.

“Me and my team were facing a very solid team tonight, but we were aware of their weaknesses inside,” Natabou said. “We tried to hit every single one of them.”

Though Natabou gave the Hornets a spark in the paint, it would not be enough as Montana began to push offensively and take control of the game. After a smooth jumper from redshirt junior forward Carmen Gfeller, the Grizzlies took a lead that wasn’t relinquished for the rest of the game.

It would be a tight game going into the locker room with Montana up 36-30.

The Hornets would come out of halftime ice cold only making three of their 12 shots while Montana clicked on every level. The Grizzlies shot 67% from the field and 50% from the three giving them their best quarter of the game and the advantage they needed in order to have a dominant second half.

“As a leader I need to help by trying to inspire the team to step up and make defensive stops,” Menke said. “We are still working on creating a solid defensive scheme, and when they come out hitting shots we need to be able to adjust and take that away from them.”

The Hornets would play much better on both sides of the ball in the fourth quarter forcing Montana to shoot 33% while Menke and graduate guard Lianna Tillman would start to look like their usual selves on offense combining for 14 points.

The Hornets also got help from freshman guard Katie Peneuete who scored six of her nine points in the fourth, but the rest of the team would stay quiet. At that point the Hornets were in too big of a hole to dig themselves out of.

The Hornets’ next game will be in Montana again against Montana State University on Saturday at 6 p.m.