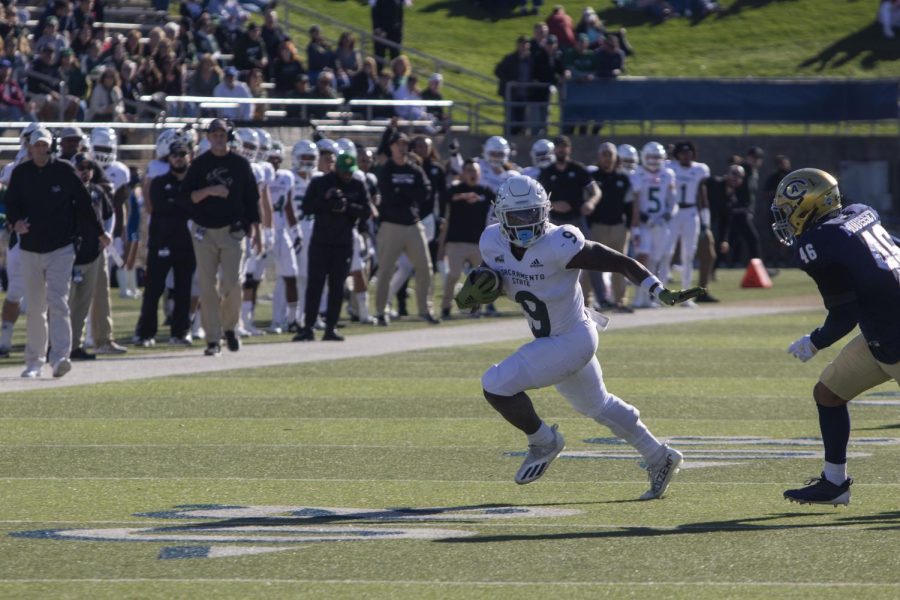 Sophomore running back Marcus Fulcher (9) finds the edge versus UC Davis’ sophomore linebacker Calvin Mouisset (46) for a first down on November 20th 2021at UC Davis Health Stadium.The Hornets will face-off against the Jackrabbits for their most important game of the season on Saturday at Hornet Stadium.

Around this time in 2019, Sacramento State football was elated after winning a share of the Big Sky Conference for the first time in program history, but their season came to an end sooner than they would’ve liked after a first round loss in the Football Championship Subdivision playoff against Austin Peay State University.

This year mirrors their historic 2019 run as they face off against South Dakota State University at home for the second round of playoffs after being crowned Big Sky champions two weeks ago from a 27-7 win against UC Davis.

The difference this year according to senior defensive lineman Josiah Erickson is the team’s mindset.

“[In] 2019 it was the first time we ever won anything, so once we got the [Big Sky] ring we felt good, we felt like we actually did something,” Erickson said. “When the first round of playoffs came around, everyone’s mindset was like we already won.”

After winning their second consecutive Big Sky title the Hornets  are looking at the bigger picture with a National Championship on the line and in the words of Erickson “[the] jobs not finished.”

The Hornets and Jackrabbits are shaping out to be a fairly even matchup for one another. Both teams are coming off of blowout victories against UC Davis and both share a loss against the University Of Northern Iowa.

In their last game against the Aggies, the Jackrabbits rushed for 433-yards and freshman running back Isaiah Davis accounted for 217 of those yards along with a touchdown.

This game has the potential to be won in the trenches, as South Dakota State rides off of the momentum of their last rushing performance and Sac State comes in as the #2 ranked rushing defense in the Big Sky.

Even as the No. 4 seed, the Hornets feel like the underdogs coming into Saturday’s game.

“I just feel like in general not a lot of people are giving us an opportunity,” Thompson said.

Still, the Hornets are preparing for this game like it’s any other week according to senior running back B.J. Perkinson.

“I am not going to lie, it feels just like another game,” Perkinson said. “We’ve been coming in with the same mentality and all we’re trying to do is get farther and farther.”

The Hornets will face-off against the Jackrabbits for their most important game of the season at 6:00 p.m. on Saturday at Hornet Stadium. Read below for everything you need to know about this weekend’s matchup.

Things To Watch For
Who wants it more?
On Saturday both the Hornets and South Dakota State will be playing for more than just playoff survival, both teams were disappointed the last time they were in the playoffs and are now playing for an opportunity to redeem themselves and make a run to the championship.

The last time the Hornets were in the playoffs  they were coming off of one of their best seasons in school history before getting booted in the first round on their home turf. South Dakota State made it all the way to the final game last season before losing to the eventual champion Sam Houston University.

It’s a matchup that will consist of physicality, grit, and pure determination. Both schools have a chip on their shoulder considering the outcomes of their last playoff performances.
Evil Twins:
Sac State has changed the perception of the quarterback position by installing a dual system that works to both junior quarterbacks Jake Dunniway and Asher O’Hara’s strengths.

The duo call themselves the “evil twins” and since head coach Troy Taylor unveiled his unprecedented play style, the Hornets have been rolling.

O’Hara and Dunniway haven’t been the sole reason for the success of the Hornet offense, the offensive line, running backs and wide receivers have worked as a unit to produce the best results but the ones leading the team on the field and commanding the offense is the dual quarterback pair.

The Aggies ran a similar two quarterback system with freshman quarterback Miles Hastings and redshirt freshman Trent Tompkins, but the Jackrabbits had no trouble slowing them down last weekend and forced six turnovers during their game.

Dunniway and O’Hara both can be potential X-factors in a game that will be won by the team who makes the least mistakes.
Keys To Victory
Sac State:
The Hornets will have the chance to redeem themselves this season after losing in the first round of the championship two years ago.

The key for this battle will be controlling the pace of the game. South Dakota State is a run heavy offense that will try to establish dominance with their physicality and for the defense the key will be doing what they have done all year against opposing offenses, which is simply stopping the run.

One of the positives for the Hornets coming off of the bye week was that they were able to take an extra week to watch film on the Jackrabbits and players who suffered nicks and injuries throughout the season were able to take a week to heal up.
South Dakota State:
The Jackrabbits are an experienced program that isn’t new to the playoffs after being there 10 years in a row.

Last week against the Aggies, South Dakota established a running game and never looked back. As a team they rushed for over 400-yards and on the defensive side they like to force turnovers and keep their offense off the field.

The key to winning for the Jackrabbits will be a fast start and controlling the time of possession.

The Hornets don’t turnover the ball often and the Jackrabbits will have to change that.
Predictions
Football beat writer Brandon Bailey:
I think this will be a back and forth game that’s highlighted by both teams’ physical play. Both teams know what’s on the line and have something to prove after losing the last time that they were in the playoffs. The Jackrabbits prefer to run the ball, averaging 215 rushing yards per game, so the key for the Hornets will be minimizing the Jackrabbits yards per carry, to keep them in long yardage situations and force South Dakota to beat them through the air. It will be a close matchup that will be dictated by whichever team dominates the trenches and wins the turnover battle. Sac State wins 38-35.
Sports Editor John Cabales:
The Hornets will need to score fast and early to force the Jackrabbits into an uphill battle. They’re a run dominant team so if the Hornets can get up on the board fast then it will force the Jackrabbits to throw the ball and that will be the Hornets chance to force turnovers. It is going to come down to red zone conversions and controlling the clock. Both teams are  evenly matched so whoever can do those things better will win. Sac State wins 30-27.
Podcast Editor Mack Ervin III:
South Dakota State looks to be a handful to deal with in the running game, and they’re no slouch in the passing game either. This is definitely going to be the hardest game of the year for the Hornets, but the bye week should prove to be more helpful than harmful to the hosts. With a chance to get everyone rested and healthy for this game, the Hornets should be able to match the Jackrabbits on the ground. It could very well be a case of whoever has the ball last will win. Sac State wins 45-42.
Editor in Chief Jordan Parker:
South Dakota State went out last week and punched UC Davis in the mouth to the tune of 434 yards on the ground. I think we’re going to see a consistent offensive attack led by Cameron Skattebo on the ground paired with the double-headed monster at quarterback doing work through the air and ground. There’s no doubt that this Hornets team is talented enough to beat South Dakota but the question is going to be whether the defense is going to step up in the key moments of the game. It’s important to remember that in Sac State’s only two losses this year, they allowed nearly 500 rushing yards in back-to-back games. In order to win, they’ll need to contain the rushing attack. I say it comes down to the final possession. Sac State wins 31-27