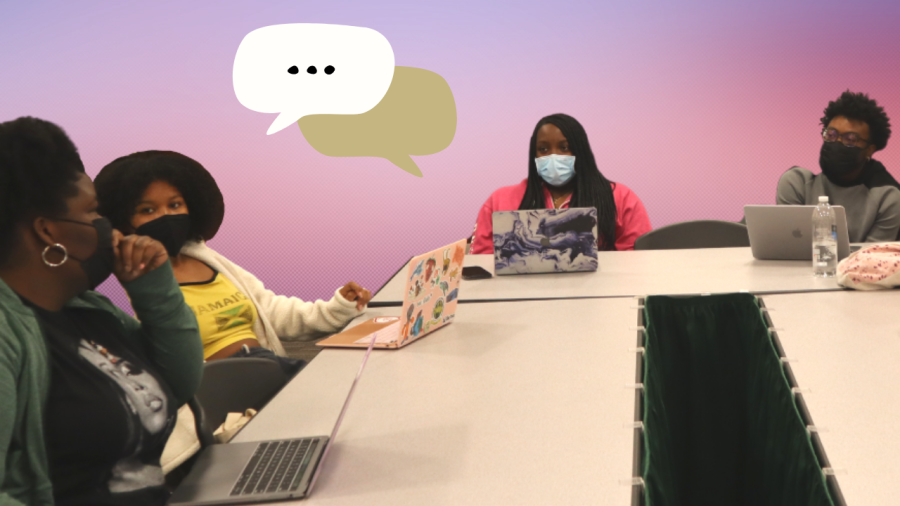 Black Student Union Board members Kameya Turner, Leila Cormier, Chiemena Agbakwuru and Ken Wilson during a board meeting on Oct. 11. BSU will be hosting this year’s Afrikan Black Coalition conference where BSU clubs from all over California will visit. Photo by Keyshawn Davis. Photo illustration by Ayaana Williams.

Sacramento State’s Black Student Union is set to host the 19th-annual Afrikan Black Coalition Conference on Jan. 14-17, 2022, or Martin Luther King Jr. weekend. This student-led conference will be held in the Union and is open to students and those outside of Sac State — including family members of students, community members and alumni.

The conference will include workshops, keynote speakers and other activities. Smith said the whole weekend is focused on educating people with all different workshops. For Sac State students who want to attend, they must also register through BSU.

ABC’s student liaison Samantha Smith said the theme of the ABC Conference is a gathering place for Black people to be themselves and have an open space for joy and happiness and not because someone died or something sad.

“To Be Black and Free” is the theme of this year’s ABC Conference. Smith said Black students can be unapologetically themselves at the event and do not have to worry about the outside world.

Sac State BSU President Kameya Turner said the theme to her means learning how to live your best life.

“Just looking at the name ‘To Be Black and Free,’” Kameya Turner said. “[Means] to enjoy the skin that you’re in and the culture you inherited from being Black and defining it in your own time so that it benefits you.”

The ABC Conference serves over 800 Black students across California, according to their website.

BSU Vice President, Kamiya Turner, twin sister of Kameya Turner said BSU is putting together the conference alongside a committee of Sac State Black students that works with BSU and ABC.

“We’ve all been…putting the conference together to make sure that the weekend is filled with these knowledge opportunities, community gatherings and community service,” Kamiya Turner said. “That’s what the African Black Coalition conference was made for.”

The event’s agenda has yet to be finalized, but in previous years Kameya Turner said workshops have included activities like self-defense, key to health and gender roundtables to discuss issues affecting Black women and men.

Kamiya Turner said that ABC is one of the best opportunities for any Black student.

“They’re also helping us build better connections on campus,” Kamiya Turner said. “They’re [ABC] not just here to give us a conference and move on. They’re also here to enhance our Black student life on campus in our BSU.”