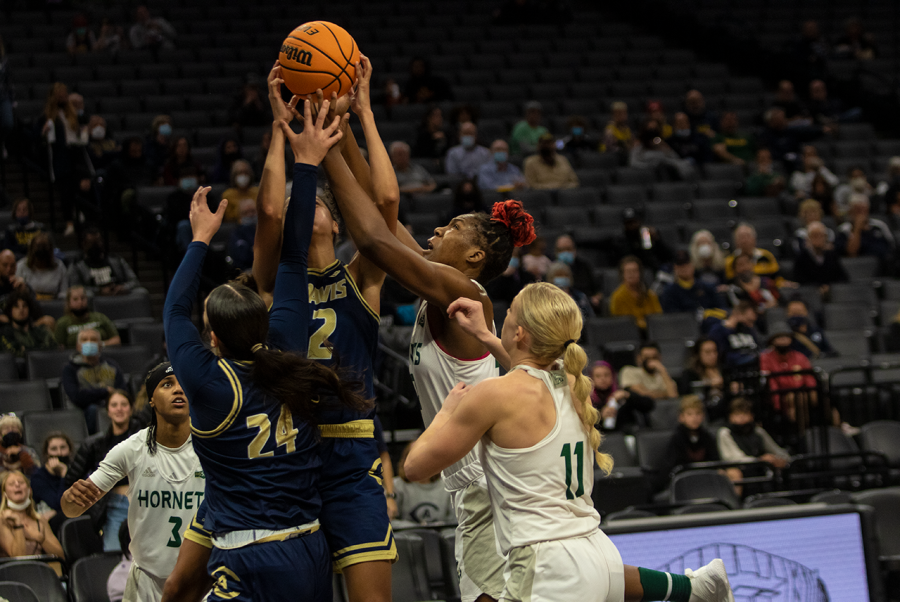 Sophomore center Isnelle Natabou gets swarmed by defenders while grabbing a rebound during both Sacramento State’s and UC Davis’ women’s teams’ first ever Causeway Classic at the Golden 1 Center on Nov. 23, 2021. Sac State women's basketball loss to UC Davis 75-46.

Sacramento State women’s basketball played against UC Davis in the annual Causeway Classic, but this year was different as it was the first time the women’s teams would get to play at the Golden 1 Center.

Sac State would go on to suffer a blowout 75-46 loss by the game’s end.

“It was a great opportunity,” said senior guard Summer Menke. “The boys have always played here against UC Davis, and as a senior I always wanted to do it…I’m happy they’re having the girls do it now.”

Even with graduate guard Lianna Tillman scoring the most points in the game with 18 and Menke with the second most with 16, the Hornets could not get it together.

Hornet sophomore guard Jessica Rios would answer with a three, but the Aggies came right back with a three from freshman guard Sydney Burns.

Davis would continue to pour it on until the media timeout with four minutes and 59 seconds left in the first quarter with the Aggies up 13-3.

Both teams would continue to struggle, only scoring one more basket each and end the quarter with the Aggies up 16-5.

The Hornets would play better in the second quarter scoring 14 points starting with a three from Tillman, but their defensive woes would continue.

Stobbart could not be stopped, shooting four of six from the field and scoring nine points. The Aggies as a team would score 19 points in the quarter alone.

The big three of Tillman, Menke and sophomore center Isnelle Natabou struggled in the first half shooting four of 20 as a unit and Natabou being held to no points.

“Izzy just couldn’t quite get in a rhythm, she couldn’t get any good post up opportunities,” said head coach Mark Campbell. “Credit them for that, they made her work…[she] didn’t get any layups or any offensive putbacks.”

The Hornets would go into the half down 35-19

The Hornets stayed cold coming out of halftime, and the Aggies continued to get hotter from the field.

Davis made four of five from the three-point line and seven of 13 from the field overall in the third quarter including a buzzer-beater from senior forward Cierra Hall making the score 58-26 going into the final quarter.

​Tillman  caught fire in the fourth quarter scoring five of seven shots and scoring 11 points but the game was already out of reach at that point.

“They’re a great defensive team,” Tillman said. “They’re well coached, and it took me a minute to adjust, but I hoped to do in the first half what I did in the second.”

The size of the Aggies bothered the Hornets all game, and even when they were able to penetrate, they were swarmed and had no easy path to the basket.

The Hornets will play again at the UC Irvine Invitational against Illinois State University on Nov. 27 and against UC Irvine on  Nov. 28. Tipoff for both games is scheduled for 2:30 p.m.