Hornets head into the final home game of season 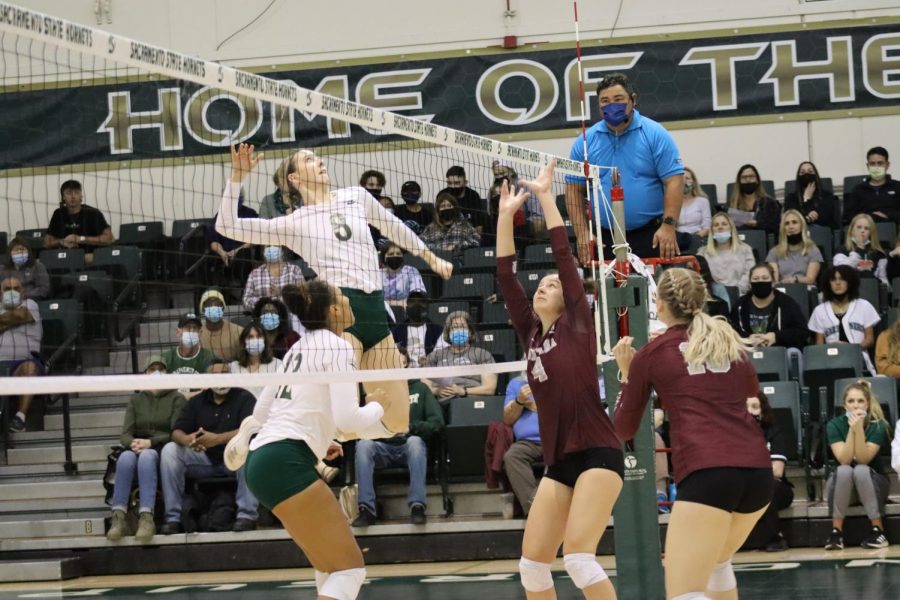 Sophomore outside hitter Bridgette Smith (8) gets ready to send the ball to the Montana Grizzlies defense at the Hornets Nest on Nov. 11, 2021. Smith had 13 kills and seven digs in the match against the Grizzlies.

Sacramento State volleyball hosted the University of Montana in a match at the Hornets Nest on Veterans Day. The band and fans boomed as the Hornets swept the visiting team heading into their last home game of the season.

“I absolutely love playing when the band is here,” said head coach Ruben Volta. “We love playing in the Nest. I think we did everything pretty well.”

Sac State had been on a tear until losing their last match, and they looked to redeem themselves. The Hornet team was on a six-match win streak in which they only dropped one set in the month of October.

The Hornets began the game against the Grizzlies playing with confidence as they consistently got the ball to their outside hitters. They led the majority of the first set while Montana tried to organize their defense.

Sac State came out with a strong offense and was able to take the set 25-18.

The team had 16 kills in the set with six of them coming from sophomore outside hitter Bridgette Smith.

“Our team already has a bunch of momentum, but the extra support [from the crowd] helps a lot,” Smith said. “We didn’t let them get on runs, we would come right back and push.”

The Hornets continued in the second with a hot offense. Sac State dominated at the net as they had 14 kills in the set, four more kills than Montana State. Macey Hayden, senior outside hitter for the Hornets, had three kills and two digs in the set.

The visiting Grizzlies seemed unable to react to the Hornets’ quicker jump as they gave up eight points from errors, which helped Sac State secure the second set 25-15.

The third was the closest set of the match with the Grizzlies staying within striking distance in an attempt to avoid being swept by the Hornets.

There were two lead changes and five ties in the set. The Hornets still continued to control the pace and finished the set 25-19.

Despite the loss, the Grizzlies challenged Sac State’s defense with hard swings at the ball.

Sac State’s senior middle blocker Cianna Andrews had a big night with 10 kills, six blocks, and a .818 hitting percentage in the match. Smith also filled the stat sheet as she finished with 13 kills and seven digs for the Hornets.

“We were really focused on our side of the net and ourselves,” Andrews said. “I just wanted to make sure when I got the ball I was doing it for my team.”

The Hornets will return to the Nest to play their last match at home for the season against Montana State University on Saturday at 1 p.m.