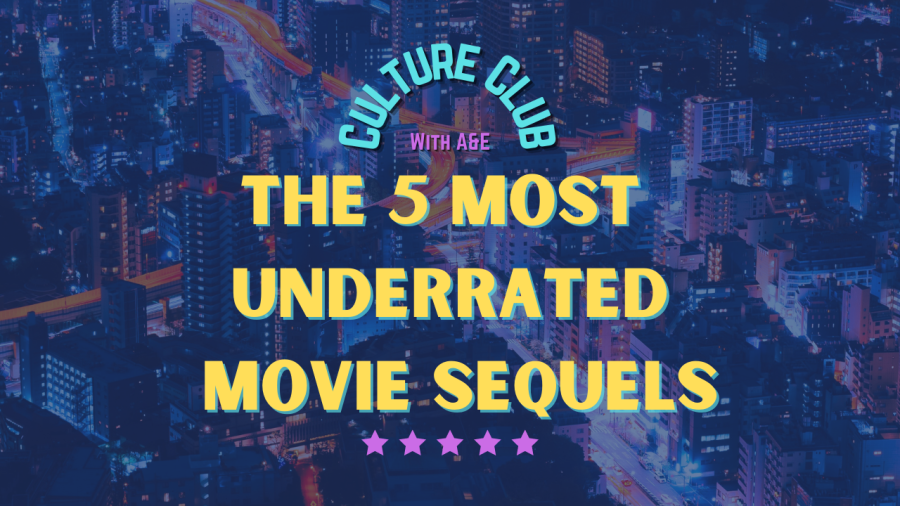 Graphic created in Canva by Zachary Cimaglio and Mercy Sosa

We all know the general consensus about movie sequels: they’re never as good as the first one or they’re just Hollywood cash grabs. However, that doesn’t mean they can’t still be fun, or in some cases, genuinely great follow-ups to the original film.

This week the arts & entertainment section at The State Hornet talks about its favorite movie sequels, running through the merits each one has as a successor to the first, and in some cases an argument for it actually being the better film!
Marin Perego: “Grease 2”


Everyone who knows me knows that I believe “Grease 2” is better than the original, and it’s impossible to change my mind. I’m almost too passionate about this.

“Grease 2” takes the original’s plot and flips it on its head, this time having Michelle Pfeiffer’s character chase the bookish British transfer student (who happens to be the cousin of Sandy from “Grease,” but that gets swept under the rug). The only recurring character is Frenchy, who disappears mid-movie. Beyond that, the plot has nothing much else to do with the original, which works to its benefit. It’s like “Grease,” but in a more enthusiastic parallel universe.

This movie is campy and perfect. Was there a need for a sequel about carefree high schoolers who create rival cliques to race against out of boredom? No. But it sure does have some catchy songs, and the costume design is impeccable. Not to mention, the sequel’s choreography is leaps and bounds better than its predecessor with its more intricate musical numbers. “Greased Lightnin” doesn’t even hold a candle to the sequel’s full-ensemble finale, “Rock-a-Hula Luau.”

“Grease 2” doesn’t really make sense, and it doesn’t have to. That kind of whimsy is what makes a great musical.

And if you’re about to tell me that you disagree, but you didn’t even know this sequel existed until reading this article, come back when you’ve seen it. I can guarantee you’ll be a little more receptive.
Zach Cimaglio: Ghostbusters II


Ivan Reitman’s “Ghostbusters” (1984) set a benchmark for ’80s comedies in many ways. Featuring A-list talents like Bill Murray and Harold Ramis, it had a spooky but campy storyline that appealed to audiences of all ages.

The movie shows the Ghostbusters being largely estranged from each other and somewhat washed up after being accused of fraud and publicly indicted in court.

The film was met with mixed reception and is mostly divisive among fans today for being nothing more than a studio cash grab.

While the first film is still superior in many ways, the sequel boasts the same comedic talent, and their chemistry is not lost after a five-year hiatus since most of their banter is still genuinely funny.

The script was penned once again by Dan Aykroyd and Ramis, and Reitman returned to direct.

Though the plot is a lot more convoluted, it is still a fun watch thanks to the quick wits of each of the stars, not to mention that seeing Lady Liberty trample through Manhattan is incredibly amusing.

“Ghostbusters II” was considered a box office failure by Columbia, but it is often unfairly looked down upon by fans today, despite having a ton of unique elements that make it stand out such as minor gothic horror elements and more detailed special effects than the first film.
Alec Ramey: Grown Ups 2


The first movie from 2010, “Grown Ups,” features an all-star cast that includes comedy legends Adam Sandler, Chris Rock, David Spade, Kevin James and Rob Schneider. The film was directed by Dennis Dugan and so was the 2013 sequel “Grown Ups 2.”

Adam Sandler’s character, Lenny Feder, travels in the first movie for the funeral of his childhood basketball coach and reunites with his old friends. Rob Schneider’s character is the only member of the group absent from the second movie.

In addition to the all-star cast from the first movie, NBA legend Shaquille O’Neal and WWE legend “Stone Cold” Steve Austin join in on the fun.

Shaq doesn’t take on too big of a role, though he does have quite a bit of screen time playing a police officer.

Austin on the other hand takes on the role of Tommy Cavanaugh, Lenny’s childhood bully.  Later on in the film, Tommy helps Lenny teach his own son a lesson about how to deal with a bully much like Tommy was.

The sequel capitalizes on the success of the first film without forcing the same charm and altering the cast too much.

It isn’t uncommon for sequels to reference the first movie The sequel even pays homage to a scene where the characters urinate in a swimming pool which led the water to change from an aqua blue to a deep dark blue by doing it again in the sequel. It could have been overdone, but because this is one of the most iconic scenes from the first movie, it’s worthy.

It provides its own charm with scenes where the main characters dealt with frat boys at a swimming hole they went to as children and Lenny taking over the school bus driving duties.

When a sequel can provide charm without relying on the audience having seen the first movie, that’s more than enough to put it at its own merit.
Michael Eskridge: The Incredibles 2


One of Pixar’s greatest creations, “The Incredibles” was first released in 2004 with its sequel released in 2018 both directed by Brad Bird. “The Incredibles” is about a family with super powers integrating into a normal society. The father, Mr. Incredible, and mother, Elastigirl, are both former famous superheroes that were forced into retirement due to law changes.

What makes “The Incredibles” a great movie is that it captures how it would truly be for a family with super powers trying to live mundane, everyday lives. The powers of each character are reflective of what each of their traditional roles would be when thinking about a family. Mr. Incredible has super strength which is symbolic to being the strength of the family.

Bird finally made the long-awaited sequel in 2018. I really like how he was able to bring back the original voice cast and characters including Samuel L. Jackson who voices Mr. Incredible’s best friend Frozone.

“The Incredibles 2” plot continues from the ending of the first movie and focuses on Elastigirl and a telecommunications expert named Winston Deavor who wants to bring back super heroes. Deavorbelieves Elastigirl has the likeability, flexibility and will to revive a healthy relationship between civilians and heroes.

The sequel does a good job maintaining the family connection as we see Mr. Incredible has his challenges with fatherhood and learning more about his children, specifically his youngest,  Jack-Jack.

We get to see Violet and Dash develop their sibling bond further, and they work together for the greater good. It is truly a sight to see.

Watch the sequel to feel nostalgia and watch the same characters bring you back to the simpler times in life. The days where “The Incredibles” toys were included in McDonald’s happy meals.


Kevin Smith’s “Clerks 2” came out in 2006 and is the sixth film produced in the “View Askewniverse” continuity set by the first “Clerks” released in 1994.

In contrast to the original movie’s style as a low-budget black and white indie movie with fast-paced dialogue, the sequel had a higher budget and production value with more attention to detail in the cinematography and dialogue as well as a full theatrical release.

The story starts with returning “Clerks” stars Brian O’Halloran and Jeff Anderson portraying Dante Hicks and Randal Graves respectively going to work in the morning only to find the place on fire due to Randal leaving the coffee pot on the night before.

The duo winds up being employed at a fast food restaurant where the movie skips a year in advance and Dante is set to get married and move from New Jersey to Florida.

The movie also features the return of the popular character-duo Jay and Silent Bob, portrayed by Jason Mewes and Kevin Smith respectively.

What made this movie great for me was the mix of past and contemporary (for its time) pop culture references, such as the argument between “Lord of the Rings” and “Star Wars” fans, while not being afraid of pushing the envelope with some shock humor.

While the movie is considered a critical and commercial success, it never matched the acclaim that the original reached with the first film inducted into the National Film Registry for preservation by the U.S. Library of Congress.

Though not as decorated as its predecessor and though the humor is dated, this movie is still a worthy watch with plenty of laughs to be had.