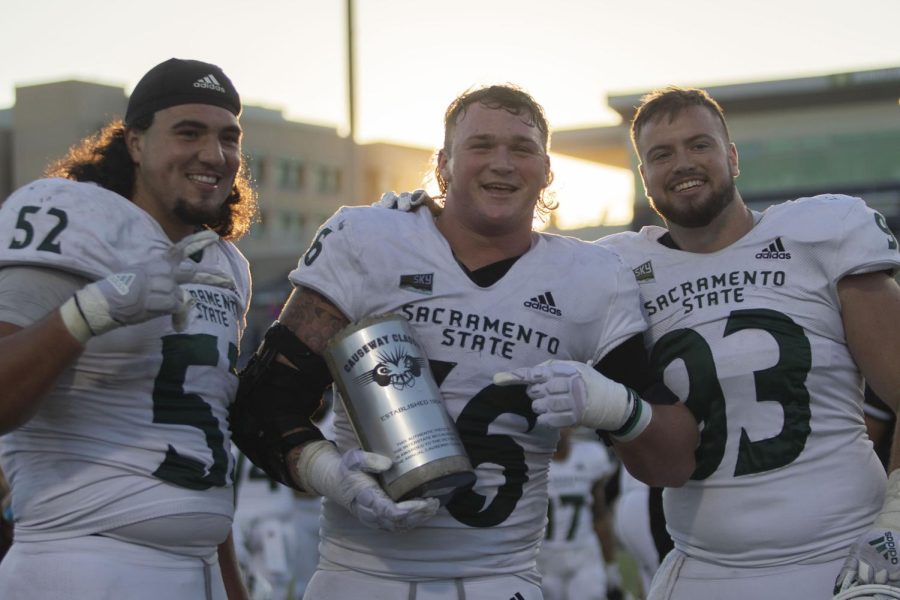 The 67th Causeway Classic was held at UC Davis Health Stadium, but it would not be long before Sacramento State snatched the life from the Aggie crowd with a dominating 27-7 victory that crowned them as outright Big Sky champions.

“Our intent was to come out here, get the ball first and go down and score and try to shut the crowd up, and we did that,” said junior quarterback Jake Dunniway.

It was another championship outing for Sac State on both sides of the ball. The Hornets slowed down the No. 2 UC Davis rushing offense, and it all started with the momentum from a hot start by Sac State’s offense.

Sac State has not trailed in the first quarter since their week three loss to Cal, and it was not any different this time against the Aggies.

“We came out, and took the ball, and scored first. Usually when we do that we‘re in pretty good shape,” said head coach Troy Taylor.

The Hornets started the game with a 16-yard strike from Dunniway to sophomore wide receiver Parker Clayton. From there the Hornets marched down to the Aggies 13-yard line, and senior wide receiver Isaiah Gable punched it into the end zone on an 11-yard jet sweep.

It was personal for Dunniway who originally started his college career as an Aggie before transferring to junior college. Dunniway said he knew at least 75 percent of the players and played with eight of the starters on defense at one point.

“It was good to see familiar faces, but it made me realize the competition we were going to go up against,” Dunniway said. “I know those guys were good players and they’re coached really well so [it’s a] testament to our guys for putting up a fight.”

Earlier this week at a Tuesday practice, Taylor said that in order to have a successful game against a team like Davis, “you’ve got to be sound and you’ve got to execute.”

Sac State did exactly that as they rolled off of the momentum of its first drive on offense and left it to its defense to shut out the Aggies early.

“Our defense was just incredible the entire afternoon…giving us tons of opportunities and we were able to kind of utilize some time in the second half and shorten the game a little bit,” Taylor said. “[I’m] just really proud of our guys.”

The Hornets stuffed the Aggies running game in the first half, only allowing 26 rushing yards on the ground. They continued to be the bandits of the Big Sky with another interception by senior linebacker Marcus Hawkins, giving him his third interception of the season and the Hornets their 14th interception as a team.

Freshman running back Cameron Skattebo continued his dominance on the ground and capitalized on the interception by rumbling into the end zone for his fifth straight game with at least one rushing touchdown.

It was a one-sided game going into halftime, and the Hornets had no trouble moving the ball and neutralizing the Aggie offense early on.

The Aggies tried to swing the momentum in the third quarter as they drove the length of the field to Sac State’s 27-yard line. But they failed to convert a 44-yard field goal.

It was a game controlled by the play of Sac State’s secondary, who were a nightmare for freshman Aggie redshirt freshman quarterback Miles Hastings. Hastings threw two interceptions and his backup, junior wide receiver Carson Crawford, followed behind him giving the Hornets their third interception that afternoon.

Sac State was too much for the Aggies and its ability to stop the run kept Davis from getting in a rhythm on offense. The Aggies did not score their first touchdown of the game until the last two minutes of the matchup, and by then it was too late.

The Hornets were crowned as Big Sky champions, and for the second consecutive matchup against UC Davis, Sac State earned bragging rights with another Causeway Classic victory.

Sac State now awaits decisions on their seeding for playoffs and whether or not their efforts will earn them a bye for the first round.

Hawkins said the key to their success moving forward in the postseason will come down to them not letting up against the competition.

“[We’re] keeping our foot on the gas and mainly just sticking to it,” Hawkins said. “Don’t  get too happy we won the Big Sky and know that all that doesn’t matter now. We’re in a new season and the big goal is to win the Natty (National championship).”