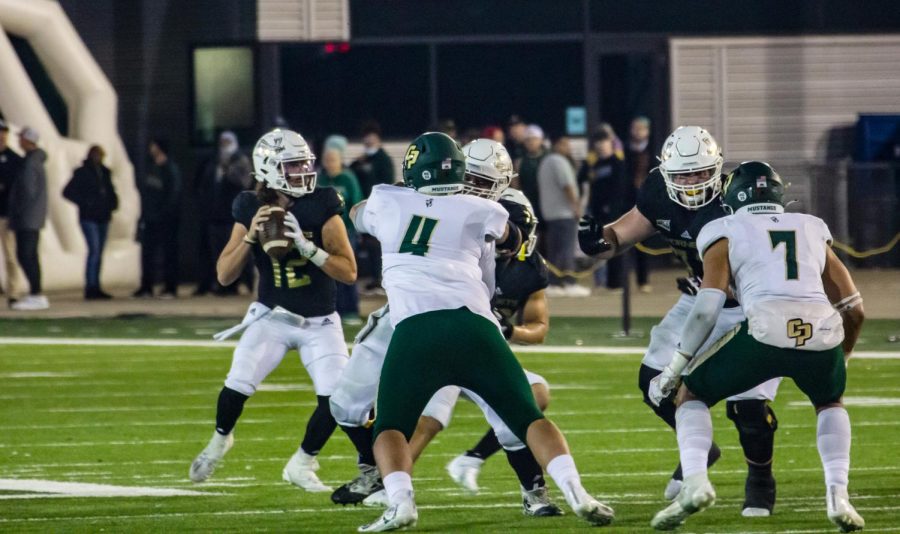 Following another dominant victory at home, Sacramento State’s football team will prepare for their last home game of the 2021 regular season Saturday against Portland State who is coming in hot on a three-game winning streak.

Although the Hornets are riding high on a six-game winning streak of their own, defensive coordinator Andy Thompson said that this will be a challenging game as they face a team that throws the ball well.

“It’s going to be a real challenge Saturday night to play great pass defense because they’re playing about as well as anybody in the conference,” Thompson said. “The quarterback has thrown for over 8000 yards in his career. They’ve got the leading receiver in the conference and we just have to do a great job with our spacing, counting on the guy next to you, and when we play man coverage it’s gotta be tight coverage.”

Since the start of conference play the Hornets have been playing tight coverage against their opponents. The Hornets are the No. 3 passing defense in the Big Sky and according to Thompson, it comes down to them finding their identity as a defense and continuing to improve week-by-week.

With the way this season is shaping out this game can go either way. Portland State will be fighting for a shot at a potential playoff bid, on the other hand.  Sac State has a chance to bring home another Big Sky title if they can win their last two games.

Read The State Hornet’s guide below for everything you need to know before Saturday night.
Things to watch for
Containing the quarterback
Both Sac State and Portland State have players at the quarterback position that can hurt opponents with their running ability and with their passing game. Jake Dunniway typically leads the passing game and Asher O’Hara does the work on the ground. Portland State’s leading quarterback Davis Alexander is a dual threat as he is the third leading passer in the Big Sky and has scored six rushing touchdowns this season.

The team that wins this game will need to keep the opposing quarterback from making plays outside of the pocket. According to sophomore defensive lineman Tyler Hardeman, it all comes down to having a good pass rush.

“I think the best way to contain him is to have a good pass rush, staying in our rushing lanes and don’t let him get out of the pocket,” Hardeman said.
Winning their matchups
There will be a lot of important individual matchups to watch for on Saturday with two teams who like to play one-on-one man coverage against the pass. The wide receiver and cornerback position will be the X-factor for both teams this game and whichever team can win their matchups consistently will come out on top. Sac State has spread the ball  to all of their wide receivers this season but when it comes down to needing a big catch or a first down, junior Pierre Williams has been their guy.

Portland State’s junior wide receiver Beau Kelly is the fifth leading wide receiver in yards and along with that he has four touchdowns on the season.

Both wide receivers will play a key role in their team’s success, but Williams is confident that Sac State will win their matchups.

“They’re primarily a man coverage team so it’s just good for us on the outside because we feel like we can win those matchups with all of our different players,” Williams said.
The keys to victory
Sac State:
The Hornets have played spectacularly on defense all season and as a result of that they are the  No. 3 ranked defense against the pass and No. 2 against the run in the Big Sky. If the Hornets want to win this game then they will have to play another sound game on defense by getting to the quarterback and keeping the ball out of Kelly’s hands. It has been over a month since the Hornets have allowed a passing touchdown and they will be challenged this week by a Vikings team that has a pass heavy offense.

The Hornets will have to continue to use their depth and personnel on offense to keep Portland State’s defense off balance with an equal effort of rushing and passing the ball and the key will be sticking to that game plan until someone in the Big Sky stops it.
Portland State:
The vikings have weapons at all three skill positions on offense that can propel them to a win if they can build off of the momentum of their last three games. This might be one of the toughest matchups that the Vikings have had against an opposing defense since facing Montana State in week four . The Hornets’ ability to intercept the pass has put opposing quarterbacks in a frenzy all season. If the Vikings want to win this game they will have to limit their amount of turnovers and hope they can break what has been a strong defensive effort from the Hornets all season.
Predictions
Football beat reporter Brandon Bailey:
This competition will be closer than most expect. I think both teams will have to grind this victory out and play with energy early on. Sac State has been a force on both defense and offense this season but the team who wins this game will be the team that can be resilient and capitalize off of the opposing team’s mistakes. Sac State wins 28-21
Sports editor John Cabales:
The Vikings are better than what their record suggests. On offense the Hornets will have to run the ball and control the time of possession. On defense they have to get to the quarterback and shut down Kelly. Sac State also has the home advantage where they usually play very well. The game will come down to who will make the crucial play when they need to. Sac State wins 33-24