TESTIMONIAL: I had to learn to love my Hispanic heritage 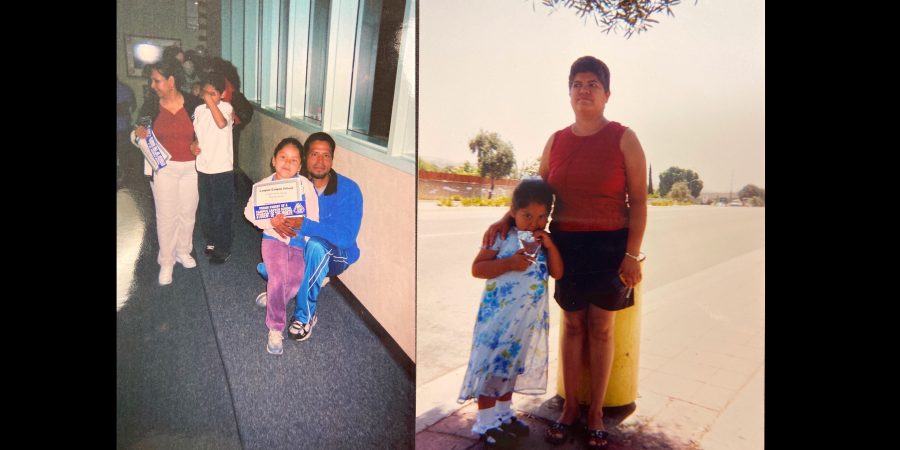 Right photo: Managing editor Magaly Muñoz and her mom after her pre-K graduation. Left photo: Muñoz and her dad at an award ceremony from her elementary school. In her latest testimony, Magaly talks about her experience with being embarrassed by her Hispanic heritage at a young age.

As we celebrate the beauty of Hispanic Heritage Month, with all of the different Spanish speaking countries coming together as one to recognize the history and culture of our ancestors, it’s made me reflect on the not-so-beautiful moments of being Hispanic.

While I absolutely love my people and my language, I didn’t always feel that way growing up.

Before moving to Sacramento, I had gone to a primarily white elementary school in an upper middle class part of Southern California knowing that my life was the complete opposite of what surrounded me eight hours a day, five days a week.

The city of Moorpark was the epitome white suburbia. Here, soccer mom’s attended PTA meetings and put on monthly bake sales before heading home to help their kids with their homework, while I stood watching from the outside in.

I was embarrassed that my world didn’t look as picture-perfect as theirs.

My whole life up until that point had consisted of parents who didn’t speak English, let alone understand it enough to help me in school. They also didn’t look like the parents of kids in my classes. My dad, with a dark complexion that has only deepened with years of working under the harsh sun, and my mom, short with features I can only describe as similar to the women in the movie “Coco”.

As a product of them, I couldn’t escape this “different” feeling even if I tried. My features were obvious of someone not from the U.S., defaultly Mexican, and my uniquely hispanic name probably didn’t help either. Because of these things, my day-to-day at school was not easy.

I hated that there always had to be a translator in the room during parent teacher conferences, was embarrassed when my dad showed up in his dirty work clothes to come to my award ceremonies and was always frustrated at the invisible barrier I felt between me and my classmates.

I still remember my cheeks heating up every time someone asked if my mom, who at the time volunteered at my elementary school, understood what people were telling her because most of the time she would just smile and nod as they talked.

I very rarely hung out with kids at my school who weren’t Hispanic, and when I did it would leave a bad taste in my mouth when my mom was the odd one out amongst the other moms because she couldn’t understand them and vice versa.

Even the music, food and clothes my parents wore was so much different than that of the community we lived in.

A part of me had resented them for not being like everyone else.

Fast forward over a decade later, and I’m more embarrassed of myself than anything else for ever having those thoughts towards my family and my people.

After moving to Sacramento in the sixth grade, I realized the lack of diversity had a large impact on why I was so ashamed to be seen as “different”. You can walk down the street in the city and notice the abundance of culture that the world has to offer beyond the picket fences of white suburbia that I was so used to in Ventura.

Now, being in an environment where I see people who look and talk just like me, I realize that there is so much beauty in the culture and language that my parents represent.

Entering middle school, I learned to love the loud and joyful music that I would beg them to turn off as a kid, and learned that the food I was once embarrassed to eat are now the recipes I obsessively watch my mom make and hope to carry on to my future kids.

With such a huge part of the school being Latinx and Hispanic, I was immersed in my heritage and given the freedom to find the person I was once so embarrassed to be.

I now wear my “botas” and sing the top 20 regional Mexican songs with pride.

My parents were and have always been two of the hardest working people I have ever met and have shown time and time again that barriers mean nothing when it comes to bettering your life for the success of your children.

Despite neither of them having more than a sixth grade education, they managed to put two daughters through college, allowing us to pursue careers we never would have had anywhere else.

Whenever I fear for my future in a field where Hispanic representation is so scarce, I remind myself that my Spanish speaking, immigrant parents didn’t endure as much as they did so that I could conform to the systems that try so hard to keep us out.

I hate that it took until I left Southern California and was almost in high school to realize that the culture I was born into was one that I would feel the most secure and at home with. I pushed my heritage so far away that it took years before I ever came to terms with the insecurities that had bred over the lack of diversity from where I grew up.

Although I can never take back the time I spent being so resentful toward my culture and therefore my parents, I know now that being Hispanic is the greatest gift I could’ve been blessed with and nothing else will fill me with as much pride.